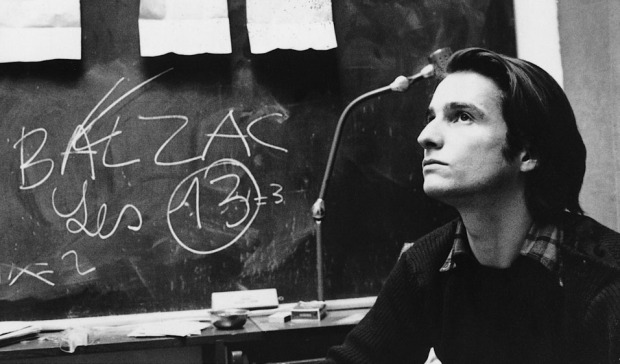 OLIVIA PERRETT braved a rare screening of Jacques Rivette’s 1971 New Wave classic ‘Out 1: Noli Me Tangere’ and lived to tell the tale…

‘Olivia. What in the name of sanity are you doing?’

This is the question I put to myself as I took my seat in Prince Charles Cinema at 9am for the first six-hour instalment of French New Wave director Jacques Rivette’s Out 1: Noli Me Tangere. Presented by The Badlands Collective and A Nos Amours, this is only the second time that this film has been screened in the UK, so it’s little wonder if you haven’t heard of it before (as indeed I hadn’t until this time last week). The film in its entirety is nearly thirteen hours long and is divided into eight feature length episodes, with a script almost entirely improvised by the cast.

Before the beginning of the first episode we were given an introduction: the main purpose of which, I think, was to mentally prepare us us for the saga about to unfold. The audience were told that ‘this show is for the heroes. And who are the heroes? The people who come to this show!’. And I have to say, by the time I left the cinema for the last time at 5.30pm on Sunday, I really did feel like a cultural warrior.

‘That sounds grim, pretentious, dire.’ ‘Won’t that be really boring?’ ‘Don’t you have an essay on Tristram Shandy to write?’

Yes, these are all valid observations, and ones that I considered many times over before I attended this screening, spread over two days with adequate toilet and lunch breaks. But Rivette’s film, wonderfully described in the introduction given by Badlands Collective as ‘an extraordinary improvised novel of 1970s Paris’, was far from grim. Everything about it – from the experimental filming techniques and improvisation to the themes of literature and art – is classic French New Wave.

It’s rather difficult to concisely summarise the plot of the film, which is comprised of enigmatic and seemingly disparate story lines that are linked together in the final few episodes by a secret society inspired by a Balzac novel. The first episodes focus largely on two groups of actors who are working on two different plays by Aeschylus. We were warned before the beginning of the first episode that some of the forty minute ‘Peter Brook style’ theatrical sequences were ‘gruelling’, and I have to say this did nothing to ease the anxieties I was already harbouring about committing thirteen hours of my deadline-riddled life to this film.

I was overwhelmingly relieved when I found that not only were these sequences entirely tolerable, but a joy to watch. The protracted acting exercises (featuring a LOT of screaming) are undeniably bizarre, but it’s absolutely fascinating to watch the actors so immersed in their work. Even more intriguing are the scenes that follow, in which the actors analyse and deconstruct their improvised work, thus exposing the juxtaposition between the actors in and out of character.

These lengthy sequences inside the rehearsal studio are interspersed with fleeting shots of Parisian streets. We glimpse a rush of traffic, the outside world, and then we’re abruptly dragged back inside. This contrast between interior and exterior shots beautifully illustrates the disjunction between the self-contained world of the theatre and the outside world. Part of the genius of Rivette’s film is that the protracted cinematic experience amplifies this disorientation and alienation from the real world. Rivette demonstrates that drama and art are such a key part of our existence, bringing joy and imparting meaning on the world around us; yet there exists an untranslatable divide between the world of art and the world of everyday existence.

As the episodes progress, the plot thickens, and the characters spread across Paris. Rivette ties the themes of theatre and literature with a portrait of 1970’s Parisian life. Rivette’s presentation of his film is pretty close to being the epitome of La Nouvelle Vague; it stars Jean Pierre Leaud, Truffaut’s protégé and star of the seminal series of films following the life of the fictional Antoine Doinel. If you like French New Wave cinema, particularly the films of Truffaut, I assure you you will enjoy all 773 minutes of this film.

I wholeheartedly applaud the Badlands Collective for organising this screening – undoubtedly a logistical nightmare. I bought my ticket half-jokingly, thinking to myself: ‘this will make an amusing anecdote.’ Which, to be honest, it does. But I also came away feeling satisfied and fulfilled, that I’ve experienced an awe-inspiring cultural masterpiece, and also that I’ve shared a unique experience with a group of complete strangers. I’ve never felt the bizarre intimacy of the cinema as strongly as I did over this long weekend in November. And, in all honesty, I would do it all again.

So I leave you with some parting advice: when it comes to art, it’s always worth taking a chance on the seemingly outrageous. It just might surprise you.

‘Out 1: noli me tangere’ and ‘Out 1: Spectre’, a shortened version of the film, is available on DVD from the Arrow Films website.