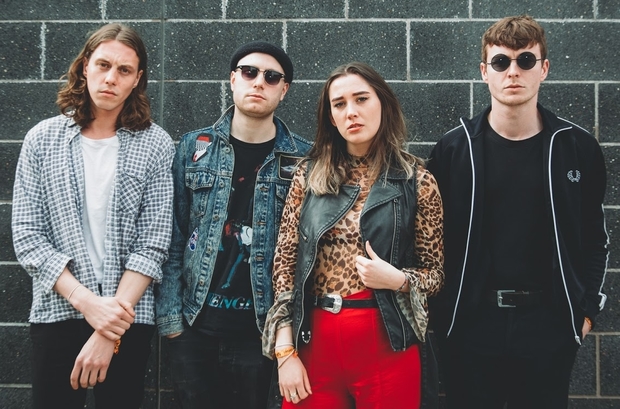 In anticipation of their upcoming London show at The Camden Assembly, NAT JONES reviews Yonaka’s secret set at The Lock Tavern.

Raucous, rip-roaring grunge perfectionists Yonaka have burst into the limelight. Having just landed a record deal from Atlantic, the vibrant four piece are the hottest new export from the humble Brighton scene, which seems to punch above its weight in producing top class bands.

Despite a busy summer playing the festival circuit, Yonaka treat their hardcore fans to a secret, free E.P. Launch show at the compact Lock Tavern in anticipation of their extensive autumn tour. Due to massive demand, there are back to back shows. There’s serious excitement for the second set, as the first cohort pour out of the venue doors. Given that less than a year ago they were playing unsigned on their first tour, their rise to prominence is a sight to behold.

Yonaka kick off, as all accomplished bands know to do, with some numbers from the new E.P., ’Heavy’ thunders in and ‘All In My Head’ quickly follows. There is certainly a divergence from the minimalism of the earlier singles; there is an added textural thickness to their songs now. Single-note riffs are now replaced with complex chords structures and even the occasional overdub. That said, their defining features remain — everything about Yonaka is incredibly polished: the image, the presence, the crowd interaction (masterfully directed by frontwoman Theresa Jarvis). Precise instrumentation lends itself to an intoxicatingly smooth performance.

Some might criticise this slick aesthetic: does it really lend itself to their grungy, chant-like choruses? Their darker content is still easily digestible – surely something with lyrical and musical menace should be a touch more unsettling? Perhaps, but Yonaka offer something else. This new generation of indie-rockers-with-poise makes a nice change from the likes of The Libertines stumbling through ‘Don’t Look Back Into The Sun’ for the thousandth time. Yonaka seem to be part of a wider movement that is re-shaping Rock n’ Roll today.

Obligatory crowd favourites soon follow. ‘Wouldn’t Wanna Be Ya’ gets the packed room singing and Jarvis enchants the crowd with her intense gaze and rich, expressive vocals. The hypnotic ‘Drongo’ and a blisteringly vibrant performance of ‘Ignorance’ are then played in quick succession. Their sound is in the vein of Jack White with its piercing vocal inflections and layers of dense electronic atmospheres. That said, there is a very clear 90s feel with the instrumentation; a combination of Nirvana’s rawness coupled with Soungarden’s clear-cut drive . Undoubtedly, the performance is tailored to the fans: there are no traces of self indulgence, or any omitting of their most popular numbers (take note Radiohead). Instead, Yonaka focus on delivering hooky pop sensations that slip in seamlessly into the speedy and visceral nature of the set.

Yonaka push the show into a climax with set closer, ‘Bubblegum’. The sickly sweet title is somewhat deceiving; staccato electronica leads into heavy drum builds as Jarvis demands ‘I want it right now’. Distorted vocal sampling suggests an evolving style: a positive step, as hints of synthesisers and electronic elements could be an intriguing addition to their well-controlled soundscape. With a big record deal with Atlantic Records secured, the band will no doubt take their place in the upper echelons of British indie rock very soon.