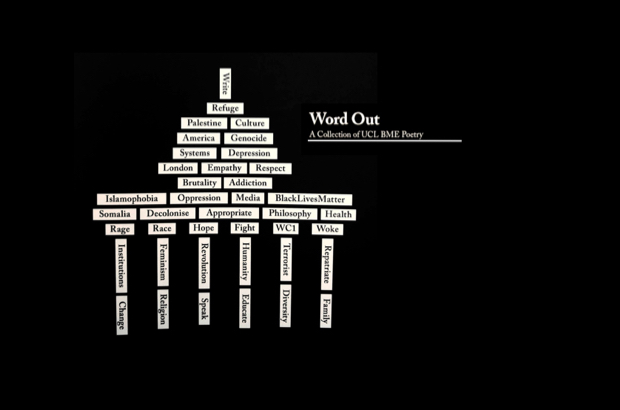 A poem by TAHMIDUR RAHMAN, featured in the UCLU BME poetry collection Word Out.

Liberation hurts.
A nation decides to end its patience because waiting never works.
The same ways remain feigned but when the people yearn,
The land is drained before it’s burnt.
And rebirthed.

Kill three million of them and the rest will eat out of our hands
That’s President Yahya Khan – February, 1971.
Bengal is a low-lying people’s low-lying land:
Words of the last Governor of East Pakistan.
His failed force of arms.
The cause caught us, starved.

Soldiers roamed into the homes of trying lives,
Striving to arise in the face of pained eyes.
Operation Searchlight.
Wombs became tombs for disguised and sore bites,
The war crimes sting in the wounded thighs of endeavour.
Heavy feathers fly from genocide where the spies never hide but they bark quiet.
March 25, the dark night; arms in Dhaka’s sight.
Students and citizens limit them; resisting is heaven sent here.
The crescent bends in the deaths of intelligentsia.
The severed strength smears a never-ending fear just to pray on it
Gun shots sung songs to the deafening sears of a bayonet.
Partition marked fission, division on religion’s line
But British lies didn’t define the end of the story
Pakistan was inspired by some friends in the Tories
It’s decided; Bengal dies a territory,
But one still run by Desh
The 70 election was won by Sheikh Mujib
Who’d sleep the war in a prison cell;
They didn’t tell him the rebels were welding his vision’s bell.
And he still didn’t concede defeat.
He believed the weak.
And so did the people of Pakistan.
Even in their army, hardly all were wanting harm
20,000 refused to fight.
The government were not the right.
The smudged lens of memory tries to divide.
But the other men had a brighter sight.
Regardless, the starved were massacred.
Houses burnt down to the ground with soldiers adamant
To leave broken mannequins of abandonment.
Women hid in the rivers,
leeches feeding on their fear as they kept a violent silence sitting under bridges.
Violation became the rhythm.
Yet each time she prayed it didn’t.
She stayed in prison.
A slave before they kill her.
Made pain a prism of repetition.
She is the Birangona; she’s brave.
200,000 raped and tortured.
War babies and abortions.
Some of Pakistan’s Imams described them as Gonimoter Maal;
The spoils of war.
Their bodies were yours if you fought for it.
The same for the whole nation.
You pay with murder for the stolen place and it’s disgraced by exploitation,
Where Bengalis had made up most of Pakistan’s administration.
And in a global race, the Soviet Union and United States used her face for a political game.
The subliminal haze of liminal gains belittle her name.
He binned her in shame, it’s no longer you and I,
A third person of rape. But it was do or die.
The hurt and the blame…
To suicide.

Liberation hurts.
A nation decides to end its patience because waiting never works.
The same ways remain feigned but when the people yearn,
The land is drained before it’s burnt.
And rebirthed.

Copies of the Word Out poetry collection can be bought on the UCLU website:
http://uclu.org/product/word-out-poetry-collection