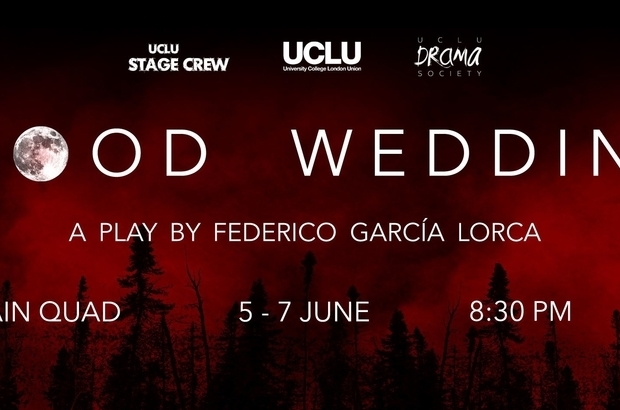 The sun goes in; the tragedy begins. The portico of the main UCL building has undergone a transformation. Quivering candlelight illuminates the performance space; white flowers hang from the wooden doors of the library; the rain patters and the wind howls, as beyond the pillars the night grows ever darker. The bleak tone of the play is aptly set. As implied by the dark, brooding atmosphere of the location – and evident in the title – the story about to commence is one of love and hatred, marriage and death, age and ephemeral youth. Blood is about to be spilled.

Blood Wedding is the first of Federico García Lorca’s ‘Rural Trilogy’ and like the later plays that form this trilogy, Yerma and The House of Bernarda Alba, Lorca’s emphasis is on the conflict that arises within domestic situations when abundant passions, particularly those of young women, are restricted by the repressive forces at play in Spanish rural society and family units. The play follows the plight of a young woman known only as the ‘Bride’, who, on the day of her wedding, elopes with her former lover Leonardo, who is himself married to another woman. There is a sense throughout of violent emotions simmering just beneath the surface: fiery desires that build and build until they are irrepressible, culminating in the play’s bloody climax of passion and hatred.

The actors weave this atmosphere of tension with delicacy and flair. Ema Cavolli, in her role as the Mother, encapsulates the dichotomy of decorum and emotional excesses through a performance that is understated yet highly compelling. Suffering is a constant companion to this woman, who has seen the cycles of love and violence unfold before. However, such suffering is suppressed by the internalised pressures of decorum and her resignation to the inevitability of death and misery. Her sorrows only truly manifest in one overwhelming moment of grief: when she learns of her son’s death at the hands of Leonardo. Cavolli’s interpretation of the character, as someone who is accustomed to repressing rather than expressing her afflictions, is utterly compelling. Ali Adenwala and Freddie House likewise deliver nuanced performances; when at last their anger boils over and they are at each other’s throats, the scene is thrilling because the audience has watched the tensions between them have been simmering quietly in the background.

Directors Poppy Crumpton and Inés Leiva, who are also responsible for the translation of the play from Spanish into English, enhance this sense of inevitability through intelligent stage direction which highlights the play’s themes and accentuates its several instances of foreshadowing. There is a scene in which the Moon – played by Emma Nihill in addition to her role as the Maid – addresses a female incarnation of Death (Megan Alicia) as an old hag and expresses her desire for blood to warm her cheeks. Nihill’s silvery blouse that shimmers in the candlelight, her dreamy expression and graceful movements all enhance this wonderfully surreal moment of interaction. In the original play, the Moon is presented as a young woodcutter, but having a female actor instead associates this anthropomorphic figure with the play’s runaway bride. After her own death, Charlotte Holtum as the Bride appears in the exact place the Moon previously occupied – her hands, rather than her cheeks, stained with blood. The desires of the ‘pure’ white moon and ‘pure’ white bride compel these characters and portents to agitate antagonisms, intentionally or otherwise.

The figure of Death, who stands opposite the Moon during their interaction, is later replaced by the Mother, who alone, without her son, sits on strands of wool that resemble trails of blood. The divisions that arise in the play are those between family members by blood and family members by law. The wool simultaneously illustrates the familial connections between spouses, mothers, fathers, friends and acquaintances, as well as those which are murderous, defiled by bloodshed. The women in the play are at the centre of the carnage as catalysts and hapless observers. The men die, victims of their own unleashed aggressions, and the woman are left behind to endure the repercussions of conflict. As well as Death, Megan Alicia also plays the Neighbour, who interacts with the Mother earlier in the play. She reappears at the end of the show to comfort the bereaved woman, denoting that, as well as suffering, Death is a companion for the Mother that alone remains when everyone and everything else is gone.

Juxtaposed to the tragic action of the play is the vivacious flamenco music from the band and the speakers, which itself at times becomes melancholic, especially in scenes of superficial and fleeting joy such as the wedding scene. This is a story about romance as well as death. In addition, such music emphasises that this is a quintessentially Spanish tragedy – with its pervasive Catholic imagery, transcendent metaphors of fire and passion, and hot-blooded conflict. Like the music in the background, the sentiments expressed through the poetic language of the script sound Spanish, while the theme of Catholicism, at variance with innate desire, likewise aligns with this characteristic of the play.

The title ‘Blood Wedding’ epitomizes exactly what the play is about. A wedding precipitates death; romance provokes disaster. The performances of the cast were engaging and generally excellent; the direction, music, and choreography managed to evoke the setting of Spanish rural life through quite simple means, such as decoration and musical genre. The wind channelling through the portico at times disrupted the proceedings of the play – for instance, blowing the candles over and causing them to roll – and the night was chilly and unpleasant. However, the cast managed to withstand the difficult conditions, and overall the stormy weather contributed to the melancholic, stormy atmosphere of the play.