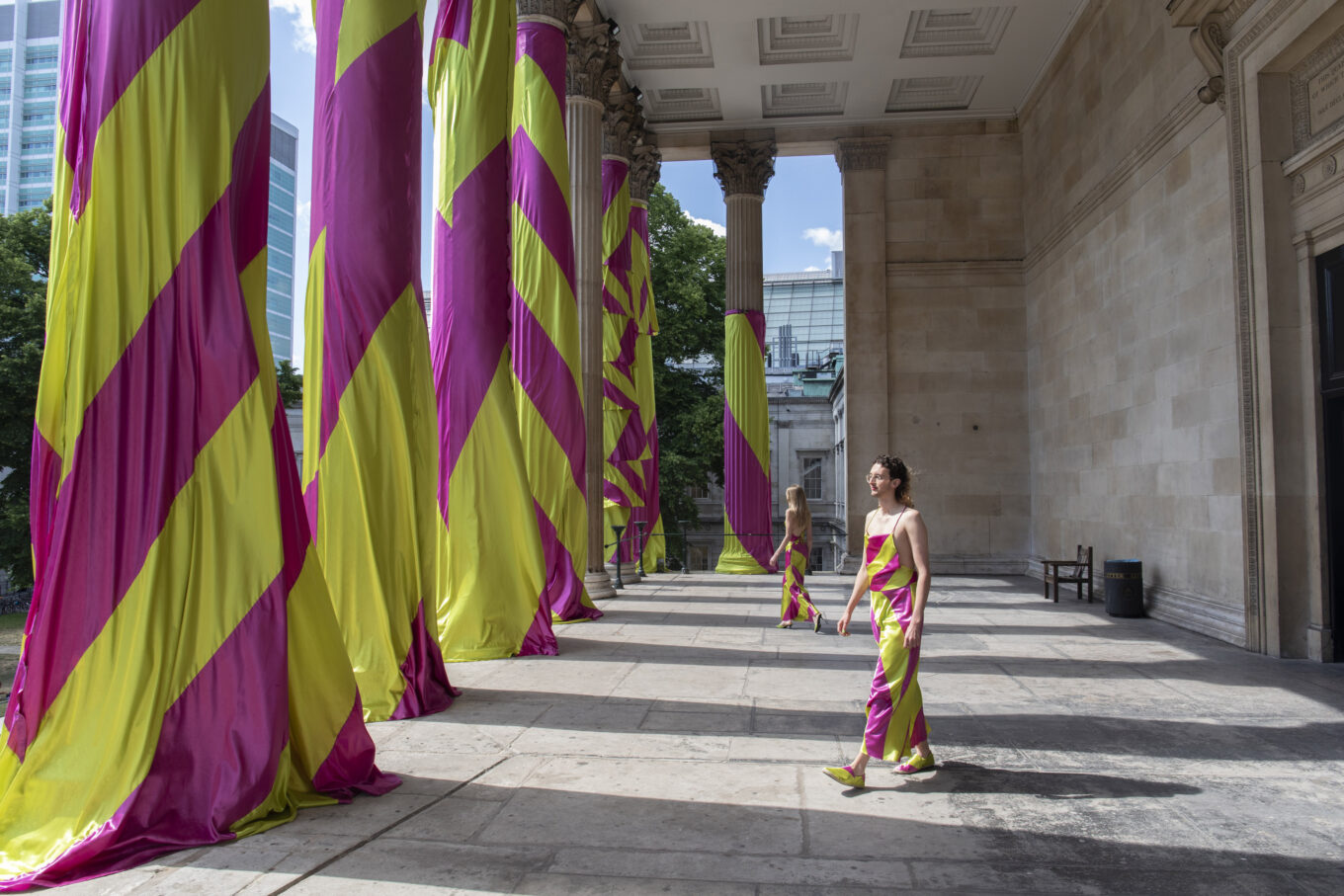 JOE BOON and ANNA BAUMGART are the collaborative duo BOON & BAUM; having both studied Fashion Design at Central Saint Martins, they began working together during their Sculpture MFA at the Slade. Through the mediums of clothing and textiles, they explore notions of identity and community, dressing not only their own bodies but the spaces, environments and architecture they inhabit. KIRA WAINSTEIN spoke to them about their practice.

Kira: How did you start working collaboratively?

Anna: We first met on our undergrad, we both did BA Fashion Design Womenswear at Central Saint Martins. We became friends and then ended up helping each other with our final collections, but we didn’t start properly collaborating until we got to Slade. We both have a similar approach; although we began with fashion, we are both primarily interested in art.

Kira: Was there a moment when you felt your practice transitioned from fashion into more of an art category?

Anna: For me, the art was always underlying.

Joe: I think CSM made it possible to explore my artistic side. I learnt I wasn’t actually so interested in making clothes, but instead in what clothing does for people, the relationships humans have with their clothing.

Anna: We’re more interested in all the ideas and concepts surrounding dressing and wearing and how we can explore those through our practice.

Kira: What was your first project together?

Joe: There are open studios at the Slade, where each student presents what they’re working on to the public. Anna and I decided to create a fashion workshop as our studio because we were interested in how people would interact with us while we were making clothes, what questions they would ask and how they would respond. It was kind of a nod to relational aesthetics.

Anna: We were interested in exposing the process and creating a space where the process of making is the artwork itself.

Kira: The making process with fashion, and with art, is often hidden and mythologised, so it’s interesting that that’s something you’re exploring publicly.

Anna: We always find it this crazy thing that everyone wears clothes, they are on our bodies every day, but not many people understand how these things have been made.

Joe: It could be applied to different areas as well, like the technology we use; we just adopt it and take it for granted. But I think with clothing, it’s interesting because there is more of a choice involved, more of an artistic expression. When you buy an iPhone you’re not thinking ‘oh I really want this to express who I am’. We’re interested in that value fashion has.

Joe: Exactly, one hundred percent. That dialogue is something we’re really interested in. Fashion highlights aspects of your personality that you’re not conscious of, even when you’re not wearing something to say anything, you’re always saying something.

Anna: It’s like a nonverbal language, it’s ingrained in who you are and how you’re living your life. That’s always reflected through your clothing whether it’s intentional or not.

Kira: I’m interested to know how these questions of identity relate to your work where you ‘dress’ inanimate objects, like the front of the UCL building for your degree show in 2019, and more recently lampposts in the street?

Anna: We like to think about questions like ‘what do we wear other than our clothes?’; ‘how are we dressed by our environments?’; ‘how are we dressed by situations and relationships?’; ‘how do we dress these spaces in return?’. Again, it’s a reciprocal thing. We were thinking about our experiences within certain spaces, such as within the institution of UCL, and talking about how that sort of space dresses us and we dress it in this sort of abstract way.

Joe: That building and that façade is really domineering, it has a lot of archaic values ingrained in the architecture. We were trying to contrast that and highlight some of the biases that exist within the institution by camping it up. With the lampposts it’s in a different vein; we’re really excited about working in the public sphere and I feel like the way we’ve been approaching the lampposts is like graffiti or guerrilla art.

Anna: We didn’t get permission or anything, we just went in the middle of the night and dressed the lampposts. Which was very different to the UCL process where we encountered some resistance at first: they said it was too much money, too ambitious, too difficult. But certain people really supported us through it and helped us find a way.

Kira: Can you tell me a bit more about the lamppost project?

Joe: At the moment, with Covid and everything, the lampposts are an injection of joy within our immediate living environment. It’s also really refreshing to do things in a way that we can control.

Anna: In the last lockdown, we were doing a lot of applications and proposals and not really getting very far because there’s so much competition right now. So we decided to just do our own thing, creating our own sort of residency in the street. We’ve always said we want our work to be accessible, we want people to be able to interact with it and touch it. So much of the artworld is about being in this pristine gallery environment but we really want that element of tactility in our work. Especially as such an important part of clothing and fashion is the feeling of it, exploring expression through touch.

Joe: I think it also plays into ideas of ownership and what spaces and what things people own.

Anna: With the lamppost, we’ve put them out there and [they’re] sort of anyone’s to own. We’re not precious about it. We put them out into the world and just see what happens.

Kira: And how have people responded to the project?

Joe: This one woman who owns a Jamaican takeaway that looks out onto the lampposts, she said she’d like us to dress the lamppost outside her shop with a Jamaican flag. And I’ve seen a lot of people going up to them and touching them and looking at them. We also have this denim one that is a lot more subtle and someone pinned a badge to it recently that said something like ‘Be Who You Are’. I think that’s so in the spirit of the project.

Kira: How do your independent practices relate to your collaborative work?

Anna: There’s a lot of overlap between the two and it can be difficult sometimes to separate them, but they definitely enrich one another. My independent practice is a lot more video and performance-based. I’ve been exploring how the garment can be like a screen that projects both inwards and outwards. Especially with Covid, I’ve been thinking about how we’re all wearing the screen of our laptops. I’ve been using a kind of green screen method to explore these ideas. For a work that was shown at the London Grads Now exhibition at Saatchi last summer, I used an old photograph of my mother with my two grandmothers and my great grandmother from the 70s and I sort of embodied each of them using green screen. It was quite a simple technique; I just wore a green outfit and did it through a live feed on a screen so I could see myself while I was doing it, almost like a mirror. I was thinking about how both images and garments act as archives of memories.

Joe: My independent practice is primarily based around craft. One of the crafts I’ve been really excited about is fish skin leather tanning and how niche it is. I’ve been around the world to Iceland, China and Japan to meet people who have that in their heritage but also people who are doing it contemporarily as well. At CSM I made a fish skin leather collection, with men in dresses and women in suits. It touched on my relationship with my dad and his love of fishing, and also ideas surrounding gender exploration.

Kira: I think that’s so interesting how you both explore similar familial and personal themes in your independent practices, while your collaborative work is more about the public and community, but it’s all done through clothes. I think that perfectly sums up the extremely personal yet innately public nature of clothing.