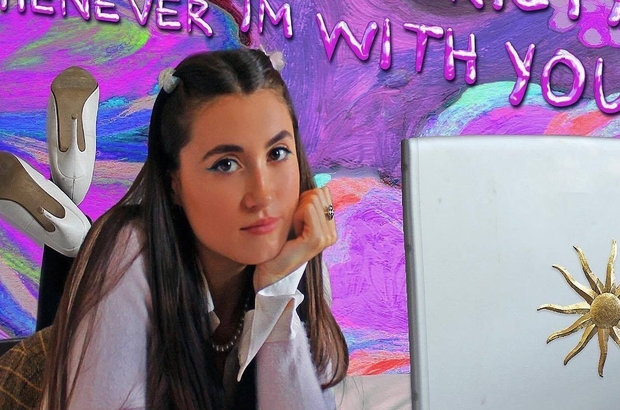 Born out of lockdown, ELPHI has just released her first EP with Hyperpop Records: a fusion of the most mainstream and innovative sides of pop. Having fallen in love with electronic music through her passion for DJing, such elements play a crucial stylistic role in her song-writing and production.  Her sound is futuristic yet familiar. KATIE MCCLUNG interviewed her about her beginnings and the future of the project.

What have you been up to recently?

I’m currently working on a body of work with the head of a label called Hyperpop [Shady Monk]. He’s taken me on as a kind-of executive producer. Throughout lockdown, we’ve been working on songs that we’re going to release over the next year or so; the first one is coming out towards the end of August or beginning of September. So I’ve been doing – and listening to lots of music!

It sounds like you’ve been busy. There’s been a lot of pressure to be productive during lockdown, has this had a positive or negative effect on your writing?

It’s definitely been positive for me. Normally, because I’m so busy, I don’t put the time into the things that I really love – which is music. I wrote one song in the first week of lockdown and since then its kept me sane and I just kept doing it.

So had you started any of the music that you’ve recently released before lockdown began?

Both of those songs were written in lockdown.

Have you made any music in response to how you felt during lockdown, or is it mainly based on pre-existing ideas?

All of the lyrics are definitely heavily influenced by the stuff that I felt in lockdown. It’s summer and everybody wants to be outside. It’s fun and it’s bright and I would just think of dancing and being with your friends. As that couldn’t happen this year, it became even more of a theme in my writing. Because it’s so bleak, you can only try and channel that into something positive.

You released your first EP You’re Pretty and I Love You / Sunburst in the middle of a global pandemic. How was that experience for you?

It was really great to do that, to have something to look forward to in all of this. But it was hard to communicate. Shady Monk, who is producing all my stuff and releasing it with his label [Hyperpop Records], lives in Philadelphia so we’ve never met. The whole process was kind of funny because we’ve never met but we’ve created so much music together! We also had more time to put into it. It was a really interesting process having it be my first EP and I learnt a lot from it. It was a little bit messier than it should have been, but now I’ve worked out what I was doing wrong and what I was doing right.

So releasing music is quite new for you; how did you get started song-writing and DJing?

So I’ve always written songs and I started DJing over the last year and a half. I fell in love with electronic music – for as long as I can remember, I’ve loved it. I’ve been to Berlin and all around Europe trying to listen to it and I think that really influenced the stuff I make now. The idea is that when we can eventually do shows, it’ll be both DJing and singing, I’ll be performing both.

Getting into electronic music also made me really annoyed that there weren’t many female DJs. I just thought, ‘I’ve got to do something about this’, and if you want something done you’ve got to do it yourself. It all just started from there. I don’t like pop music because there’s none of that gritty element in it, it’s all very saccharine, but I thought it would be fun to mix that hyper-sweet side of pop with dark electronic sounds. So that’s the sound I’m trying to develop.

Where did the name and idea for ‘Elphi’ come from?

It’s a really weird answer but I dreamt about it (then I woke up and I thought about it first obviously). I liked it because it sounded like a green word. And I wanted it to give connotations of [something] pixie-like and ethereal, but also a bit cute.

You have a perfectly curated Instagram feed, is visual imagery an important part of the project?

I think so. The first thing that Hyperpop asked me when they got in touch was ‘what are your socials like?’. So I had to delve into the world of social media. I always liked Instagram but I never really took it very seriously. Now I don’t post about my friends much, I keep it strictly music or things that I think people listening to my music would like. It’s a tool at the end of the day and that’s how I use it.

Are there any particular musical or artistic influences that you aim to reflect in your work?

So I really love this producer called A.G. Cook. He started a label called PC music which creates the style of the music I’m making. Charli XCX is really great. Grimes. Along with a lot of electronic DJs such as Hannah Diamond. Vocally, Amy Winehouse. It’s definitely an eclectic mix.

Elphi is a very new project; do you think it’s going to be challenging balancing working on the music alongside your degree?

Luckily, because we had all this time this year [during lockdown] where I wasn’t doing my degree, it allowed us to have this big bank of time and now music. If we stick to our current plan of releases, it will mean that we have enough songs written already. We’ve effectively written an album. When it comes to doing a degree, it will mean that I’ll have to take a little bit of a back seat in terms of writing music. I’ll let you know.

The future of live music is pretty uncertain at the moment, how do you think this will affect the project?

So we’re currently doing lots of online festivals, online performances. It’s really strange but there’s this community of people using Minecraft as a platform on which to make music and perform it like a festival. You have your little avatar and everything. [The coronavirus lockdown has] kind of induced creativity in people to do stuff like that. I think everything will be a lot more online. Personally, it’s not really changed the way that I’m writing the songs; I’m still writing them as if I would sing them live.

So are you hoping to do live shows when they’re allowed again?

Definitely. Besides anything it’s probably the most fun part of it, to share music with people that are literally with you right there. The whole online thing is so great and you can reach so many people that way, but when you can see someone’s proper reaction in the flesh it’s unbeatable.

What are your hopes for the future of Elphi?

Just more of the same. Just try and keep doing it. It’s taught me that if you want something done, then you should just do it because the world doesn’t wait. I think lockdown taught me that you might as well just go for it.

You can find Elphi on Instagram at @__elphi__. Her first EP You’re Pretty & I Love You / Sunburst is streaming on Spotify and Apple Music.