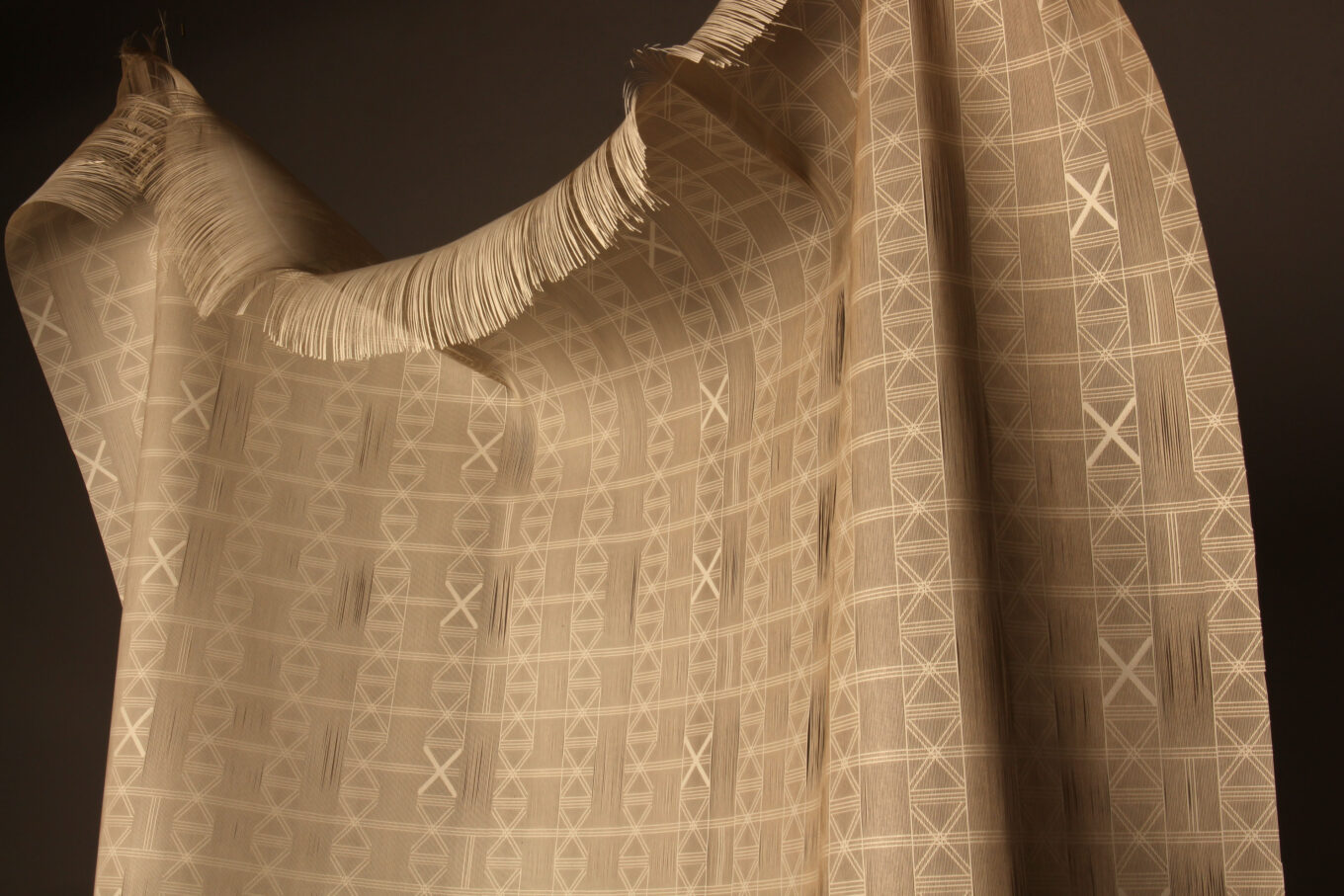 ISOBEL NAPIER graduated from the Slade in 2018. KIRA WAINSTEIN talked to her about her practice of laser cutting and photograms, and the relationship between art and craft.

You’ve developed a really unique process of using laser cutting technology on paper. I was wondering how you discovered and worked on this?

When I first started at Slade I was using really traditional techniques. I was just in the darkroom or print room and doing very old-school things. But at the end of the first year, I was trained on the laser cutter to help someone with their degree show, and I just loved the technology. It was not like anything I’d ever worked with before, and it was so dramatic: all the smoke and flames. It’s similar to printmaking and photography because it’s just another way of transferring an image onto something, but it works more in terms of removing something in the negative – so either by cutting or burning away the surface of something. This felt really exciting to me, so when I came back in the second year I just wanted to see how I could apply it to my own practice, especially to repeat patterns in textiles. And then I developed it by many hours of playing around; a lot came about just by mistakes that I then actively recreated.

That’s interesting the idea of removal, that you’re almost creating a negative image, because the other part of your practice is photograms, which is also kind of a negative image. Can you talk a bit about your photograms and how it relates to the laser works?

I think one thing that’s really nice about the laser cut works is that they’re so delicate and don’t last, they just deteriorate. So I was looking at ways to preserve them. I’d already been interested in darkroom photography and photograms especially, and it was perfectly suited to that. The technique has been used in the past for preserving say, very old textiles, where the pattern can’t be visible anymore because it’s discoloured, but if you use a photogram then the textures come out. It’s very hands-on with loads of chemicals, which is very different to the machine laser cutting.

I find your work very evocative of textiles, how you’re taking paper and making it look like fabric.

Yeah definitely, I’ve always been interested in textiles and recently I’ve started accessing archives more and looking at fragments of textiles, which has shaped how I work. It’s something that I’m now working on developing. I want to make my work more frayed and less structural and more delicate in relation to that.

Outside of textiles, where else do you take inspiration?

A lot of my inspiration comes from interior design and architecture. I’ve also been looking at two particular female artists at the moment. Běla Kolářová was a mid-20th century Czech artist working with photograms. She used very modest, domestic materials like buttons in the darkroom, really playing with what the process can do to create beautiful, subtle photography. And Rebecca Salter as well. Similarly quite subtle, using repeat patterns and mark-making; she does a lot of woodblock printing.

Is taking inspiration from women artists something that’s important for you?

Yeah, I do actively look out for that. Obviously, in the area of textiles that I’ve chosen to focus on, there’s a huge host of female makers that are really excelling or have in the past. Anni Albers is another good example of a textile artist I’m looking at.

You collaborated with Aēsop for London Craft Week last year. I was curious to know where you feel your work falls on the art/craft spectrum and if you think this distinction is still important?

I hadn’t really thought about it until they approached me and linked it to craft week. And I wasn’t sure if ‘craft’ was the connection I wanted for my work. But I think it’s really good for me, I really value making and process and that is the starting point [for me] instead of concept. And craft really is about that.

It’s interesting that distinction in relation to women artists and makers, often women are lumped into the craft category.

Yeah, I think maybe that was my concern at the start!

But it’s good that it’s opened you up to thinking more about that distinction. How do you feel your practice has evolved since graduating?

I think the work with Aēsop has probably been the biggest evolution since I left because it was such a great opportunity to be pushed, to advance the scale, which I wouldn’t have been able to do by myself. And to see it in such an architectural space, the interior was really dramatically designed… I think that was a really good context for my work instead of just a white cube space. So that’s something I’ll actively seek out now and think about in the construction of the work itself.

Would you like to talk about any other recent projects?

During lockdown, I was in a show with a new art centre called Common Thread. It was such a dream show for me, I was so pleased to be involved. It really focused on artists and makers that were specifically focused on textiles and that took process and material as a starting point. All the works complemented each other so well and were so tactile. And luckily people got to see the show in person which was good because everyone’s work was about material and it was important to see in real life.

You also collaborated with Burberry, I was wondering how you feel your work is suited to collaboration?

I think it’s suited to my work to collaborate with designers in other areas; I don’t think it takes anything away from it and it pushes you in ways you wouldn’t get [by] yourself. The Burberry one was great, I had just graduated so it was a great confidence boost and the money allowed me to set up a darkroom at home. It helped me really understand how I could keep making work outside of the Slade.