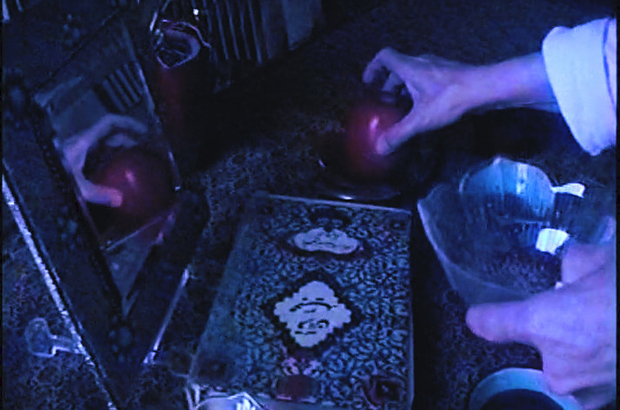 NIKI KOHANDEL is an artist entering her second year at the Slade. Working mostly with film and digital print, her interests lie in filming things that can be nurtured but also grow out of control: mothers, daughters, house gardens. RUBY ANDERSON interviewed her about her work and what inspires it.

What initially attracted you to the medium of film?

I really got into it by chance. I had this editing project on my art foundation [course] where we were asked to look at found footage. So it started with the process of editing. But then coming to the Slade I was pushed to start making my own films and create new images. I was in a painting pathway, and I was really shocked when I realised that film is pretty much like painting. You can do so many things just by layering and changing the colours.

What kind of things have you been working on this year?

My work has mostly been about my relationship with my mum and other women in my family. Since I started my art foundation in London, I have been investigating feelings of nostalgia, looking especially at my grandmother’s garden in Paris and my aunt’s garden in Tehran. I have really vivid memories of these places. I was fascinated, for example, by my grandmother’s garden decaying as she was ageing, as no one was able to take care of it anymore. I have been thinking about motherhood a lot, and about the relationship I have with my mother and her past. There is a lot of love involved, but my work is also about seeing how double-edged that can be. Sometimes relationships can be very consuming and destructive, and not in an obvious way, but more by excessive love. I am really interested in how things that look very sweet and soft can actually be very dangerous and disturbing.

Do you write storylines for your films, or are they purely aesthetic pursuits?

My films can come out of both aesthetic images that I have in mind, or they can come from poetry that I write. Watching Sergei Parajanov’s The Colour of Pomegranates [1969 avant-garde film] was very freeing for me. It was the first time that I saw a movie where no one talked, and I realised that you don’t have to write a script with dialogue for a movie to be a movie.

Is there a particular piece of yours that you are especially excited by?

It’s not something that’s finished, but I am particularly excited by a film that I have been doing over lockdown. It is based on my grandmother’s stories about her escape from a marriage by coming to France. It uses recordings that I had of her, which I realised over lockdown that I could do something with. It has been really exciting, because it is the first time that I have put myself in the work – I re-enacted the scenes my grandmother described using objects that I have at home. I was not behind the camera, but in front of it.

You have such an organic process; everything comes so directly from you and your family. That must take a lot of courage.

Definitely. My mum has been a bit uncomfortable, because I have been editing at home, so she has had to hear these stories on repeat. My grandmother didn’t remember most of the stories, however. Talking to her about the film, she has now started remembering them again. It’s really interesting to see how what I’m doing has awakened memories in her.

Do you think a lot about the viewing experience? As in, if you’re posting a still image on Instagram, that is seemingly more digestible than committing to watching a three-minute film. Is that something that is frustrating at times, that it takes a bit more of a commitment for people to sit down and watch something that you have made?

Yes, definitely. What was great about seminars was that people were forced to sit down and watch what I had made. Posting on Instagram is very energy-consuming because you put too much care into what other people think, when really the responses you receive from that platform are not an accurate representation of how they would have felt had they watched your film in a different context. I am really interested in the viewing experience. Since my work is a lot about nostalgia, I was experimenting a lot with how people could watch my work using DVDs.

That is so interesting – as in using an outdated format to trigger a nostalgic response?

Exactly. Viewers would have to choose what they wanted to watch, which is so much more interesting than just clicking play on a tab on Netflix. I am really interested in that crossover between analogue and digital. In my film On My Mind, I used a camcorder that shoots on to tapes. It is the same camera that my mum used to film me when I was growing up. And now the tables have turned, and I am filming her. Every time my mum would film me, I reached for the camera. I find that crazy because for years I didn’t think about film or cinema, I didn’t think it was a thing I could do for real. But watching back those tapes it seems the passion has always been there.

Do you find inspiration from any unlikely sources?

Sometimes people say really random stuff and I’ll note it down, because I think that can be the source of some really cool poetry. For example, the other day I wrote down ‘Do you remember the woman who is just a piece of skin?’ which is a reference to Doctor Who. I also like to translate things that people say in Iranian – you usually end up with some very intense imagery. For example, to say ‘I love you’ in Farsi, people say ‘I would eat your liver’. Another one which is very common is ‘I would die for you’. People say that to each other when they have just met. Because I was born in France and I had these two languages when I was growing up, I was never really able to use these sentences even though they are common in Iran. I have been writing recipes inspired by these phrases. I have been replacing ingredients so that they match the phrase – it is very cannibalistic. I am planning on making them into films in a later stage of their development.

Do you think that lockdown changed your approach to art-making dramatically?

I think it has made me become more resourceful. For the first few months, I couldn’t get anything done. Pre-lockdown I was using a lot of energy figuring things out and planning things. I think being locked at home made me look around and realise that I have a lot to work with just around me. I have been filming people from my balcony in France. Our balcony faces lots of other people’s balconies. Over the first few weeks, I saw lots of people exercising out there, or grandmas watering their plants. It was stuff I wouldn’t normally film but I found myself drawn to. I filmed my mum opening some cherries that had worms in them, lots of random things. It was about what we were experiencing at that moment that made all of these everyday things seem so incredible to me. Lockdown has also made me realise that I want to start collaborating more. It is really ironic, because this period of not being able to see each other has made us realise how great it was that we were all together. We have been discussing collaboration more seriously now that we can’t actually meet up to do so. My friends and I have been working towards setting up Slade Society, which will hopefully bridge the gap between Slade students and the rest of UCL, and also provide funding to put on shows and events. Now, we think the first term is definitely going to have to be online.

What are you most looking forward to doing when we return to normality?

I just want a typical day at the Slade, which is not something you can predict. You go into that building not knowing what is going to happen, and then by the end of it, you could end up in some remote part of London with people. I don’t know if spontaneity is something we’re going to get back for a while.