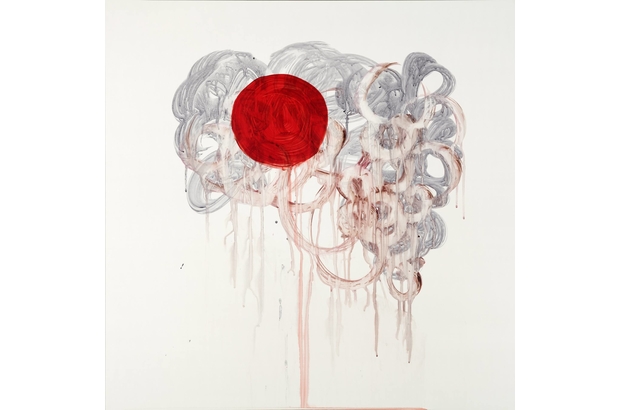 A poem by SOPHIE NEVRKLA.

Two figures, perched on a hill.
He looks up at the sky, flat on his back.
She sits to his right, little Buddha,
legs crossed, eyes shut –
she searches for something she cannot
find as her eyelids glow orange, hot.
They share a secret silence, breaking bread.

London sweats itself out around them.
Pulsing, heavy,
the air quakes, shakes –
and he says he needs a walk.
She watches him leave,
then disappear through the thick curtain of heat –
he bobs away,
a dust mote in the summer air.

A child cries out, lets go of their balloon.
She watches the red shape rise up, up, up –
a big, happy heart.
Or a cut!
A deep gash on a skin of blue sky.

The balloon is above the trees now.
It taunts the child, clutching his toy truck,
still crying below.
Where is he?
He has been gone a long time.

The sun rises higher still, jubilant,
and the city buildings catch the light.
Lying back on their rug,
she sinks into the bed of memory.
Echoes of old laughs sound off the hills,
and the rug smells of April, of birthdays.

She remembers stuffy bedrooms,
like greenhouses with thin white sheets,
Italian cobbled streets,
palm to palm, skin on skin;
that place is as far away as yesterday.

Where has he gone?
She did not realise he had been away so long.

Aeroplanes whine overhead, siren calls –
they leave tracks, footfalls mid-air.
The little red dot floats on through the smog.
She is sure she can see it still,
just over the pastel houses,
yellow, blue, pink.

Words turn themselves round in her head,
twisted and tight.
What will she say?
Branches of trees – tangled knots above her.
What can she say?

A car backfires –
she sits up. A figure moves
up the hill through the crowd,
hands in pockets, head down.

Yes, there he is!
Is it him, through the trees?
He has been away so long, so long –
and yet, here he is.