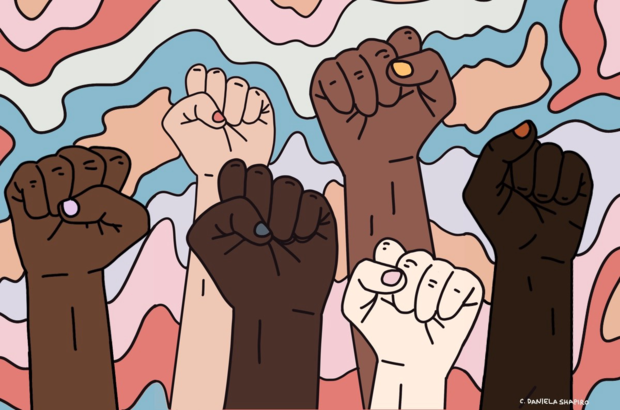 AIDA MULUGETTA-LOPEZ’s testimony of her experiences as a Black person of colour, in light of the Black Lives Matter movement.

Individual and institutional acts of racism have always plagued the Black community. Now, with the emergence of the Black Lives Matter movement (in 2020 particularly), the only difference is to do with the platform. The BLM movement has allowed Black people to express the racial injustices that they continuously face to those who, until now, have been able to live their lives without ever needing to worry about discrimination.

I’d like to outline my visible privileges, firstly by pointing out that I am mixed-race (Black African and White European). So, while racism impairs me, colourism (whereby people within the Black community with lighter skin are favoured over those with darker skin) also benefits me. Secondly, I am a cis female. So, I will never have to face the additional discrimination and brutality that trans womxn of colour do, nor am I villainized in the media the same way young Black males are.

Yet despite these privileges, I’ve still experienced racism living in the UK as a person of colour. I’ve been called racial slurs, followed in shops, asked how I could afford certain items of clothing and undergone the typical ‘did you live in mud huts when you lived in Africa?’ questions. I’ve had random people touch my hair on the street, I’ve had people say my natural hair was ‘messy’, and last time I had locs [dreadlocks], someone at work called me an ‘African jellyfish’ in a pretty derogatory way. And the list goes on.

Yet, as much as these acts of racism annoy and sadden me, I’m much more troubled by those involving security and police forces. In-depth security searches at border controls are something I’ve gotten used to (it seems to be that every time I pass through an airport, I get that white cloth passed around my bag and scanned to check for drugs). However, more recently, I find myself getting pulled to the side and searched upon entry to bars and clubs in London while my White friends walk straight in. For example, on my last night out before quarantine, at a place in Elephant and Castle, I got pulled aside as I apparently ‘looked suspicious’. My White friend walked in without even getting patted down, while I had every pocket of my bag searched. The security guard even opened my tobacco packet, rummaged through it using their fingers, and smelt it. Similarly, all my notable encounters with the police in my past year and a half living in London have been while with groups of Black friends – coincidence? I’m not so sure.

And these experiences are all despite my visible privileges. Imagine the experiences of those who weren’t born with these same advantages. Moreover, this does not even scratch the surface of the socioeconomic and environmental privileges that I hold over other people from the Black community, my African American family in the US and Europe included. I was born and raised mostly in Europe which automatically puts me at an advantage to my great-aunts/uncles and grandparents, who migrated to the US and Europe as asylum seekers from East Africa. As well as the hardship that comes alongside forced emigration, they equally had to grapple with a new language, new education system, new culture and a completely new way of life upon arrival to host countries. Together with the lack of opportunities that prevent low-income citizens and/or immigrants like them from accessing stable, well-paying jobs, add in the racism they’d get for being Black.

The BLM movement must encompass all Black lives… immigrants, members of the LGBT+ community, the homeless, all genders, all socio-economic backgrounds, all religions and all political orientations. Within the Black community, there’s a spectrum that we must acknowledge. We’re not all the same, we’re not all treated the same way by society, and we’ve not all had the same experiences. People like myself, have had it far easier than most Black people have.