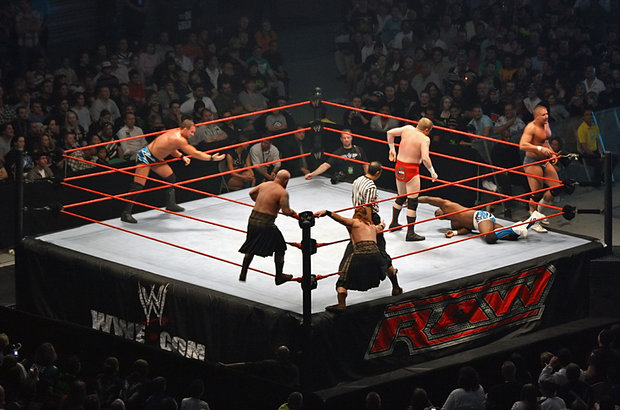 Professional wrestling is an immensely popular form of entertainment. Perfectly fusing combat and soap operas, it attracts millions of viewers from around the globe. There is, however, a widespread awareness of both the theatrical nature, and the profound danger, of the genre. Unlike other sports, professional wrestling is the physical embodiment of theatrical violence with potentially dangerous consequences. Vince McMahon, the owner of WWE, labelled the genre as sports entertainment. Professional wrestling is an example of performance theatre; it incorporates a mixture of improvisational and physical theatre with scripted storylines and the mock-combat seen within the ring. Those who we deem wrestlers are merely physically adept actors who are trained in both the pretence of combat and the execution of heightened – often hyperbolic – dialogue.

World Wrestling Entertainment, formerly known as World Wrestling Federation, has long dominated the world of televised wrestling. Though the origins of WWE can be traced back to the 1950’s, under the moniker of Capital Wrestling Entertainment, an increased global interest in professional wrestling and the WWF was seen in the 1980’s. There were many reasons behind the wrestling boom of the 1980’s, including the beneficial relationship between the WWF and MTV. This brought professional wrestling to a massive audience through the popular music channel. The WWF went through several successful eras, with figures such as The Rock, The Undertaker, Mankind, and Stone Cold Steve Austin paving the way for an entertainment revolution.

The appeal of professional wrestling is a subject of debate. Apart from including storylines that often border on the ridiculous – most notably, Kane being haunted by an imposter dressed in his former, 1990’s era attire – the violence in professional wrestling is prevalent. These are trained actors, but the physical demands of the job can often be lethal. The moves performed by the wrestlers can lead to serious injury if not executed perfectly. The story of Darren Drozdov is a cautionary tale on how theatre can go horrifically wrong. Drozdov was fighting D’Lo Brown in a 1999 episode of Smackdown Live when he was the victim of a poorly executed running powerbomb (a professional wrestling move where the wrestler will run while lifting the opponent before slamming them onto the wrestling mat). The severity of his injuries were such that he became quadriplegic. Professional wrestling can be extremely dangerous, and the extremities of WWE’s theatrical pursuit can often be seen merely by watching the varying degrees of complex combat moves showcased to their audience.

Injuries within the wrestling ring are unfortunately common. They are a universally accepted by-product of professional wrestling. They rarely shake the industry, or expose the dark underbelly of mistreatment towards wrestling performers. This, however, all changed with the death of Chris Benoit. This incident brought to light a number of key issues that, to this day, have been brushed aside by the WWE in an attempt of historical erasure. Benoit was an incredibly successful WWE wrestler. Some critics hail him as the greatest wrestler to embrace the industry. His name, however, has become a taboo. Merely uttering it will often provoke confused and concerned expressions amongst fans and fellow wrestlers, The WWE have attempted to erase Benoit from wrestling history like trying – but failing – to remove a blood stain from a white shirt. You can compare Chris Benoit to the legacy of the rock band lostprophets. Many fans, myself included, cannot listen to their music once aware of the horrific crimes committed by their lead singer, Ian Watkins. Similarly, there is an uncomfortable, almost deafening, silence when Benoit’s name is uttered amongst wrestling fans.

Benoit’s notoriety expanded beyond the wrestling scene when he infamously committed a murder-suicide. Over the course of three days, between the 22nd June and 24th June 2007, Chris Benoit killed his wife, son and eventually himself. To this day, his shocking actions remain unexplained, leaving a myriad of questions for anyone familiar with the case. The WWE initially showed a three-hour tribute show to Benoit on the night of the 25th June which had both highlights of Benoit as well as interviews with fellow wrestlers. When news emerged of the malicious details of his death, however, WWE aired a recorded statement by Vince McMahon. This statement, delivered on the 26th June, served to enforce a separation between the company and Benoit:

There will be no mention of Mr. Benoit’s name tonight. On the contrary, tonight’s show will be dedicated to everyone who has been affected by this terrible incident. This evening marks the first step of the healing process. Tonight, WWE performers will do what they do better than anyone else in the world: entertain you.

The last words of that broadcast are somewhat ominous. The focus of the WWE is to ‘entertain you’, but at what expense? Many attributed the tragedy to steroid abuse, which had been prevalent within the professional wrestling circuit since the Golden Era of the 1980’s. Although a prevalent issue, the WWE turned a blind eye to the use of steroids, until the death of Eddie Guerrero in 2005. His premature death at the age of 38 was caused by cardiovascular arrest and had severe links to the culture of steroid abuse that had been fostered by the desire to retain relevancy to the corporate machine of the WWE. His death caused an industry change, provoking the emergence of the WWE Talent Wellness Programme – a comprehensive drug, alcohol, and cardiac screening initiative introduced in early 2006. In the VICE documentary Dark Side of the Ring, Chris Jericho talks about how the Wellness Programme was incredibly strict on steroid usage with the WWE attempting to change the drug culture that was embedded into professional wrestling. Other wrestlers and critics, however, have pointed to the lax attitude towards steroid abuse, with wrestlers finding alternative methods to incorporate steroids into their regime as was seen in 2007 when Sports Illustrated published an exposé detailing how fourteen WWE wrestlers were acquiring performance enhancement drugs through illegal online pharmacies. Either way, the level of testosterone found in Benoit’s body was far greater than the average man at the time of death.

Performance theatre requires total dedication to the craft. The widespread culture of steroid abuse is a testament to the expectations placed on wrestlers to be on top of their game at every given moment. The fear of losing relevancy to a fleeting televised audience is believed to have fuelled this substance abuse. The case of Benoit, however, also exposes the issue of the physical threat associated with performative theatre. Chronic traumatic encephalopathy (CTE) is a neurodegenerative disease caused by consistent head trauma. The WWE infamously used steel chairs and incorporated moves that involved smashing through tables and jumping from ladders. The most famous example is when Mankind was thrown off the cage twice in a Hell in a Cell match by the Undertaker in 1998. Though considered one of the greatest wrestling bouts of all time, many could not help but think Mankind was dead when he smashed through the Spanish commentator table from a 22ft height. Though these matches are highly coordinated, there was little consideration to the long-term health ramifications of consistent head trauma. Former wrestler Christopher Nowinsky said how Benoit ‘was one of the only guys who would take a chair shot to the back of the head … which is stupid.’

In hindsight, the lack of protective measures by the WWE is astounding. There was an acceptance within the industry that the wrestlers had to put themselves in danger in pursuit of entertainment. Chris Benoit’s brain was analysed and described by the head of neurosurgery at West Virginia University as being parallel to an ’85-year-old Alzheimer’s patient.’ Alzheimer’s and dementia are considered to have connections to the progression of CTE and can cause erratic and often dangerous behaviour in those who are afflicted by the disease. Frequent concussions caused by consistent head trauma in the wrestling ring is another example of the dark underbelly of theatrical extremity that WWE pursue in the hope of entertaining their audience.

Benoit’s case is a tragic and cautionary tale on how wrestling is an extreme form of theatre. It is important to state, however, that a medium of expression that entertains millions cannot ignore the health and welfare of their actors. The many deaths and injuries seen in the WWE are indicative of the need for reform within the industry to protect their actors from physical and neurological trauma. There cannot be another Benoit case as such a horrific tragedy cannot be ignored when there is mounting evidence of malpractice when it comes to the welfare of their performers.