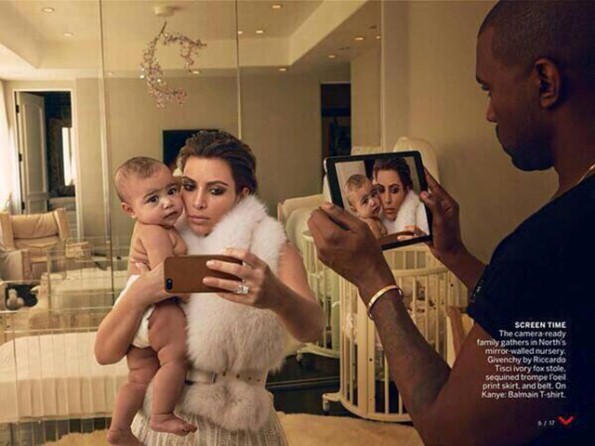 JOE JACKSON questions Kim Kardashian’s role in the media and its effect on society.

Whether they were cutting-edge satirists or irresponsible controversy-merchants, eleven employees of Charlie Hebdo believed so strongly that Freedom of Expression should be an exercised right, they were willing to taunt 1.6 billion people and knowingly accepted the risks engendered by causing offence on such a scale.  Now, in the aftermath of their deaths, Kim Kardashian’s use of that Freedom seems terribly wasteful.

Remember when the Internet broke?  I do.  Heard anything else from Mrs Kardashian-West since that (un)eventful day? I’m going to hazard a big fat guess and say: no.

Fear not!  Your regulated dose of Vitamin K has arrived!  You can now enjoy a decade of Kardashian selfies in a convenient book called (I jest not) SELFISH!

If you don’t find this level of egocentricity rather disturbing, firstly slap yourself, and then promptly harken back to The Day the Internet Broke.  The theory that ‘the key to total ubiquity is giving up all of one’s verbal edges and sharp angles’ is a significant moment of Amanda Fortini’s 2014 interview with Kim Kardashian, the very dry and largely-ignored accompaniment to Jean-Paul Goude’s infamous shoot.   Existing purely for the sake of adding a level of faux-sophistication to PAPER magazine’s cunning use of Kimmy K’s nipples to whip up a social media sh*tstorm, the meat of the interview was bland and weak. Kardashian’s dullness was magnified by the exchange, as the interviewer herself noticed:

‘She [Kardashian] tells me that she is “obsessed with apps” but, when I ask her to name one, she replies, “I like all different apps.”’

As well as keeping your mouth shut, Fortini  suggests that ‘occasionally tossing out a memorable visual flare: a sex tape, say, or a nude photo shoot’ helps to maintain a global omnipresence in the social-media age. My initial interpretation of the PAPER shoot was, admittedly, that this was the culmination of a) a magazine’s need to make money, b) mainstream culture’s adoration of celebrity, and c) Kim Kardashian’s well-documented tendency to fame-whore. Perhaps I’m being unfair.  When attempting to grapple the mysteries and puzzles presented by these photographs, perhaps it is unjust to jump to conclusions as Fortini and I do – so let us turn to Mrs Kardashian-West for guidance. What profound meaning does the art wish to attach to itself given this unusual opportunity?

‘And they say I didn’t have a talent…’ she tweets, ‘try balancing a champagne glass on your ass LOL.’

Days before ‘Break the Internet’, on the 8th November, Keira Knightley  revealed her political motives behind her topless photographs by Patrick Demarcherlier for Interview Magazine in August 2014. Comparing Kardashian and Knightley’s comments on their respective nude shoots exemplifies a key difference between the two cultural icons.

“That [shoot] was one of the ones where I said: ‘OK, I’m fine doing the topless shot so long as you don’t make them any bigger or retouch’ because it does feel important to say it really doesn’t matter what shape you are.”

I highly doubt that similar sentiments have ever crossed Kim Kardashian’s mind or threatened to appear on her Timeline.

People  inferred from Knightley’s  uncharacteristic decision to bare her chest in the first place that this was no run-of-the-mill shoot for the actress.  Back in August 2014, long before Knightley’s more recent comments, Claire Cohen of the Daily Telegraph was heralding the shoot ‘a victory for small breasted women.’

What aggravates me about Kim Kardashian – and possibly points towards an underlying problem within modelling culture in general – was her silence after the shoot. Her customary coquettish silence. When I use the term silence, I do not count empty interviews or inane Instagram hashtags as Kim Kardashian the Person speaking.  These are not instances of the individual attempting to communicate through the trappings of her fame, but of the branded image consuming and dictating the individual, masking any glimpse of a personality or an opinion. Kardashian avoids image-altering controversial comments because her silence ensures that her position atop the fame ladder is never threatened.

Boasting 25.5 million followers on twitter, an estimated worth of $65 million, her own television show and an Empire ranging from clothing and make-up brands to perfumes and phone apps, Kim Kardashian is undeniably a prominent cultural figure.  Kim is a role model because, for some ineffable reason, people pay attention to her.  It’s sad but true: Kim Kardashian holds an important social position and, therefore, a large amount of responsibility.

“I think women’s bodies are a battleground,” says Knightley, “and photography is partly to blame.”  I agree, and the indifference of influential cultural figures during these battles does nothing to help the cause. Keira Knightley only needed two sentences (two!) to reiterate her shoot’s poignant message, thus Kim Kardashian’s constant silence squanders an incredible opportunity to do an exceptional amount of good.  In a perfect world, all influential cultural figures would stress how really unimportant it is that what you’ve been given by nature isn’t attractive to everybody. But alas, patriarchal constructs form the foundations of Kim Kardashian’s Empire – and she will continue to keep quiet over all unfashionable topics until the day the Empire falls.

So when her shoots are over and the champagne glasses return to their rightful place, impressionable boys and girls pretending to be asleep will sneak their phones under their duvet to catch a glimpse of Kim K’s cyber footprint. As they scroll through the web, all they will find  are some breasts, a sextape, a plethora of uninspiring tweets, and a wide collection of other SELFISH things. And then off they’ll go to Youtube to learn how to Kontour like Kimmy because, whatever Keira Knightley says, the body shape ‘battleground’ is still teaming with opponents. Opponents who could make very powerful allies.