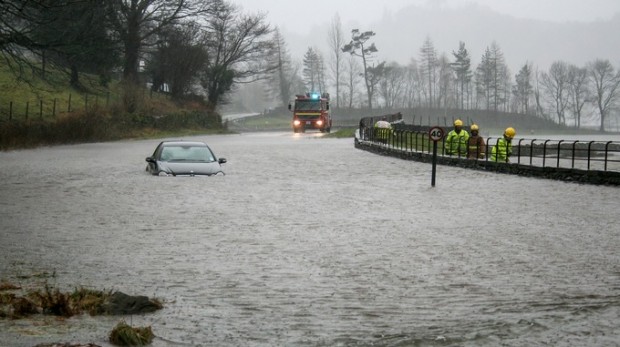 If ever we needed evidence to prove that global warming is an imminent threat, this is it. This December, Cumbrian town Honister totted up 341.4mm of rain in just 24 hours, exceeding British records for rainfall since they began. Lakes such as Thirlmere and Derwent Water broke their banks to destroy surrounding residences and bridges collaped completely, requiring 130 of them to fall under urgent inspection. The view of Cumbria that I returned home to in late December was truly apocalyptic.

Of course it had also been chucking it down in London. We do not not associate metropolitan life with wading through the street to get to the nearest shop, but the Thames has broken its banks in several places over the last few years. The most devastating incident was the floods within the Thames valley in 2014, which overwhelmed villages in Somerset. These early warning signs were clearly too meagre to concern the government about the fearful impacts of global warming on rivers across the UK: David Cameron’s promise of £2.3 billion capital budget over six years comes several devastated counties too late. The short-term nature of policies such as subsidising 5000 homes across Cumbria and Lancaster with tax relief just proves the lack of environmental awareness and foresight within the current Conservative government.

Storms Desmond and Eva flooded 16,000 homes throughout England and the effects were horrific to witness. I was driving through the usually bustling and lively centre of Cockermouth (on the West Coast of Cumbria) to reach a friend’s house. It was like a ghost town: the Christmas lights reflected off of shop fronts, revealing bleak insides, the carpets stripped, nothing to sell. Some businesses had the luxury of being able to relocate upstairs, but for most it’s a long wait to renovate, recover, and return to normal. It’s become a common occurrence in places like Keswick and Grasmere to see people lingering around bridges and looking out over rivers, trying to predict whether another disaster is approaching. The already sparse infrastructure of Cumbria has been compromised: the A591, the vital and perhaps only direct link from Keswick to Grasmere and beyond, has completely collapsed due to landslides. It was questionable as to whether my brother, who works in Grasmere, would be able to make it home for Christmas at one point. Children attending Keswick School have had their education put at risk; they have had to trek up Dunmail Raise on foot, escorted by supervisors, to reach a shuttle bus to take them to school each day. For some in the midst of their GCSEs and A Levels, the everyday necessity of school has become something that is potentially out of reach.

It seems almost ironic, then, when in sight of these disastrous events and impacts to Northern England’s infrastructure, that I am still receiving emails from Transport for London about a proposed Crossrail 2 link for London and the South East. Even without flooding, it takes ridiculous amounts of time to reach destinations within Cumbria – with some towns and villages void of train links and with only a bus that appears once in a blue moon. Whilst living in London I have found my way to all my proposed destinations within an hour. The capital is incredibly well linked and transport is not in dire need of improvement, especially in comparison to Cumbria and most of the rural North. It is deeply frustrating when the government still prioritises London and Southern areas in terms of spending, when entire towns have been cut off and bridges collapsed in the devastated North due to poor flood defences: a direct consequence of a distinct negligence from the government in rural spending. The ‘anything above London comes second’ mentality is one that David Cameron quite blatantly maintains. Is it really any wonder that Scotland wished to become independent, when so little attention is paid to the far North? The government’s mentality needs to change if we are to protect the whole of our country against such devastating weather conditions in future and maintain everyone’s political support in the meantime. And with the threat of Global Warming becoming increasingly glaring, improvements simply must be made – and fast.