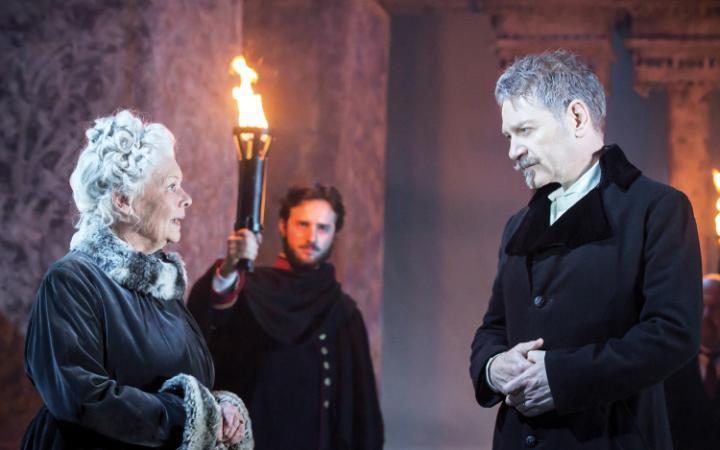 GEORGIE COWAN-TURNER reviews ‘The Winter’s Tale’ at The Garrick.

Kenneth Branagh’s production of ‘The Winters Tale’ casts a spell on the audience like no other. Co-directed with Rob Ashford, it’s one of a star-studded six-play season performed by Branagh’s new West End theatre company. ‘The Winter’s Tale’ has the potential to be one of Shakespeare’s most captivating plays when performed well, and this production captures the jealousy, redemption and loss at the heart of the play in a perfect rendition of this tarnished fairy tale.

The play begins in a whirl of festive merriment, a Dickensian Christmas complete with snow and a huge tree. But this appearance of a quintessential and sentimental Christmas is soon overcast by the jealous broodings of Leontes (Branagh). His malice emerges from nowhere; one second he is playing with his son and the next he is overcome with ‘tremor cordis’, questioning his wife’s fidelity and his son’s identity. Branagh’s performance is brilliant and believable; his emotions run rampant, yet his Leontes avoids becoming a caricature of a madman. His sickness is the inability to listen to anything but the ‘green-eyed monster’. Jealousy springs from nowhere and feeds off itself, escalating the play into Shakespearian tragedy at treble the speed of ‘Othello’ or ‘King Lear’.

Christopher Oram’s sets brilliant reflect the characters’ moods. Leontes’ castle is a representation of his psyche with the stereotypical Christmas scene stripped down to an ice palace as Leontes loses his reason, which subsequently leads to the disintegration of his home and family. In the final act, Leontes stands alone with snow falling onto his white face, seeming almost to be part of the ice walls surrounding him – nothing could evoke his mental state more effectively. Oram’s sets are anchored in iconic settings: the pleasantly rustic Bohemia shares similarities with the peasant scenes in Tolstoy’s ‘Anna Karenina’ and Leontes’ court comes to resemble the Snow Queen’s Ice Palace in Hans Christian Anderson tale. It enables us to latch onto something almost familiar; yet, by remaining unspecific, it also has a curiously distancing effect, very much like a fairytale. The sets break up the greater picture of the play, as if it is shattered into tiny fragments; this motif of shattering something once beautiful and precious runs throughout. The conflicts and family breakdowns that occurred so early are never completely resolved – just as no one can piece together every tiny fragment of broken glass.

Branagh’s casting has to be praised; in particular a host of strong-willed female actresses, who give their characters a vivacity and strength that makes this a very feminist reading of ‘The Winters Tale’. Jesse Buckley’s Perdita is a free spirit whose energy and vitality is a delightful relief after the melancholic darkness of the previous scenes, whilst Miranda Raison is engaging and passionate as Hermione. And, of course, Judi Dench’s Paulina lived up to the hype, bringing authority compassion and wisdom to the role.

In the final scene between Dench and Raison, perhaps the most awe-inspiring of the play, Branagh beautifully captures Hermione’s statuesque state as the stage is flooded with white lights, producing an eerie, unearthly glow. Branagh creates a moment of wonder – it’s as if we’re looking at a three-dimensional angel that stuns the audience into total silence. We can understand Leontes’ confused, ‘If this be magic’. As Hermione is brought back to life it’s as if we’re witnessing a miracle in one of the most captivating moments I have witnessed on stage.

Branagh’s re-imagining of ‘The Winters Tale’ is a must-see. He brings to this play a beauty and precision more common to film, without destroying the intimacy so integral to theatrical productions. It’s the last week of performance and tickets have been hard to find, but if you can get one then you’re in for a treat.

‘The Winter’s Tale’ is playing at The Garrick Theatre until 16th January as part of a season by The Kenneth Branagh Theatre Company. For more information visit http://www.branaghtheatre.com/the-winters-tale/