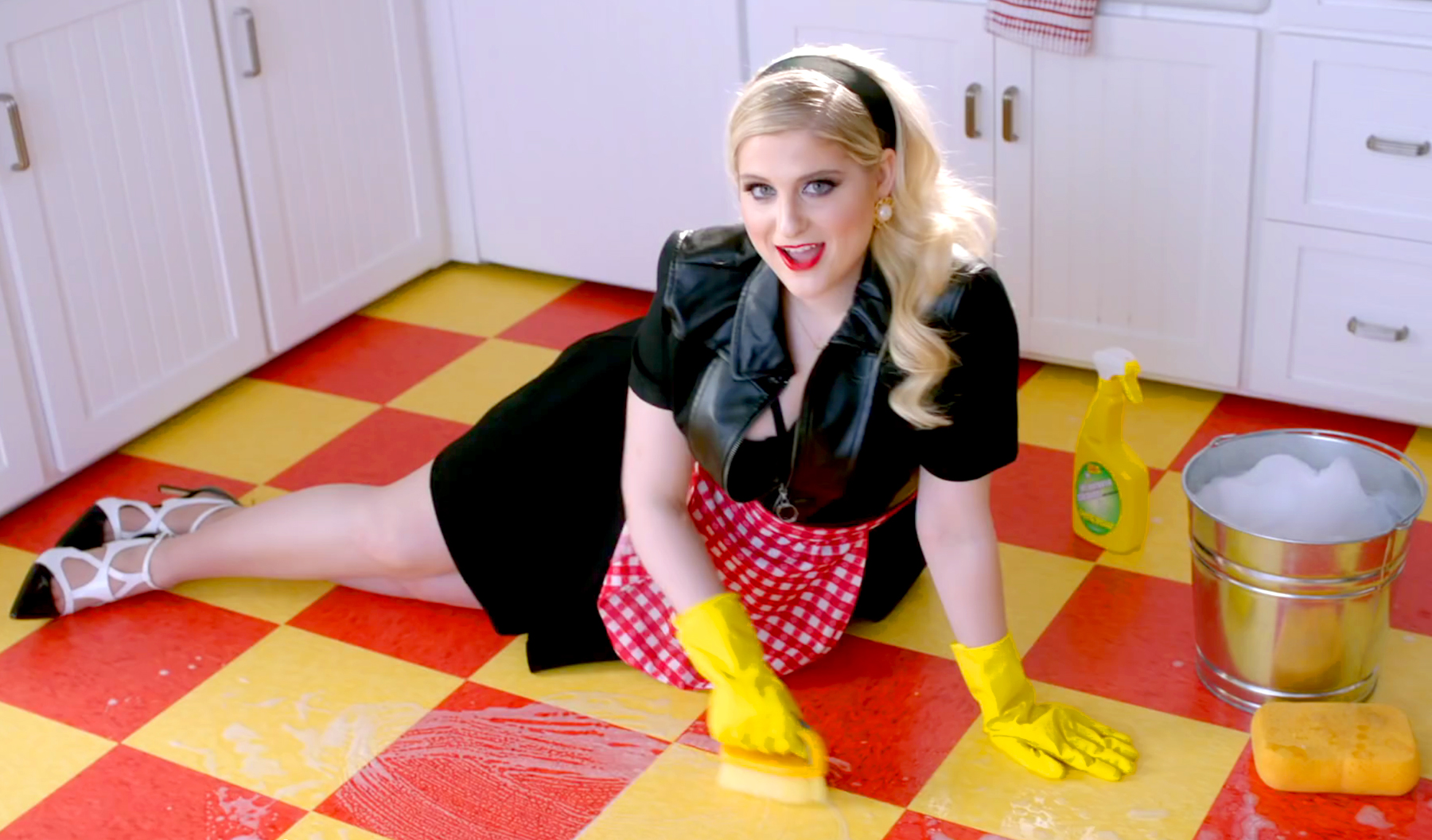 Unless you’ve been living under a rock this past year, I’m sure you will have heard songwriter-turned-pop star Meghan Trainor’s hit All About That Bass. The notoriously annoying and catchy song has divided the female body-image camp, and it’s not hard to see why. On the surface, Trainor’s pop tune seems to promote a healthy female body shape: ‘my mama she told me don’t worry about your size’. Woohoo, fantastic, another step in the right direction for positive representations of the female body.

But whilst I can’t deny that Trainor is clearly endorsing a fuller body shape, and she herself serves as a reminder that women who are larger than a size eight can crack the music industry, on closer listening to All About That Bass it seems to be for all the wrong reasons. Trainor goes on to croon over the chorus: ‘the boys want a little more booty to hold at night’. Trainor seems to be informing her perceptible young listeners that male attention is the ultimate goal; not that our body shapes should primarily satisfy ourselves. Trainor indirectly promotes the message of: ‘hey, it’s ok to be whatever size you want because the boys like it’ and not: ‘hey it’s ok to be whatever size makes YOU happy.’

I’ve tried really hard to give Trainor another chance at winning me over, both with her songs and personality, but she just seems to anger me more and more. In my mind, Meghan’s most sexist tune is Dear Future Husband. Even the title is offensive. In the song, Trainor lays down her list of demands to her future spouse if he wants to get her ‘special lovin’’. Not only is she perpetuating the unrealistic ideal of the perfect man/marriage/life (delete as applicable), but also she seems to suggest (again) that male gratification is the ultimate goal. Is this really a mentality we want the next generation to have?

Trainor even suggests in Dear Future Husband that one of the qualities of the ‘perfect wife’ involves ‘buying groceries, buying what you need’. I know that Meghan’s music is 1960s inspired, but let’s not revert to the traditional female roles of that era, shall we? On another level, I’m not sure suggesting that girls and women should spend time thinking up a list of demands to serve their future spouse is very good life advice. Cynical though I am, I would’ve thought being satisfied with your current life was more important. Maybe that’s where Meghan and I differ.

What enrages me the most about Trainor is her open declaration that she does not identify as a feminist. How someone who pens songs that supposedly promote positive female body image can brand themselves ‘not a feminist’ is beyond me; but I suppose if she’s just interested in pleasing the boys, then female equality probably isn’t high up on her to-do list. As convoluted a concept as feminism has come to be considered in the past few years, the basic definition of the term is the belief in the equality of the sexes. Based on that, the fact that any person, let alone one in the public eye, does not consider themselves to be a feminist is shocking.

But Trainor’s controversial comments don’t stop there. She recently claimed that she ‘wasn’t strong enough’ to have an eating disorder in her younger years. Trainor’s ignorance about mental illness shines through and I, like many others, know better than most that ‘strength’ has nothing to do with it. It is most certainly not a conscious choice. In a recent interview with Rolling Stone, when asked what her favourite book is, she states point blank: ‘I don’t read books.’ Understandably, world-famous pop stars don’t have the time to spend hours extending their personal library, but Trainor just comes across as ignorant. In fairness, at least she is being honest about her opinions and not lying for the sake of attracting a book-loving fan base. But the message that pervades, in both her lyrics and interviews, seems to be that education, and frankly self-respect is dispensable as long as boys want to take you on dates. It should be obvious that this is exactly the kind of message you don’t want to send to impressionable young tweens – or anyone for that matter. She adds at the end of her response to this question: ‘if I read this and it sounds stupid, I’m going to be pissed.’ Quite frankly, I don’t understand how it could come across any other way.

This brings me to Trainor’s latest musical offering. Title is essentially Trainor demanding that a boy gives her the title of ‘girlfriend’ – as if being labelled by a man is what a woman needs to feel a sense of self-worth. Case in point are the lyrics: ‘You gotta treat me like a trophy, put me on the shelf.’ She may as well just say ‘please objectify me’. I understand Trainor’s motives for writing about love and relationships and body confidence – that’s 75% of pop music right there. But there are so many other female pop artists who manage to tackle the same issues without seeming to enforce the outdated ideology of female objectification and male dominance: see Taylor Swift and Beyoncé. Maybe Trainor just has different opinions. Maybe she genuinely doesn’t realise that her songs come off as so anti-female empowerment. I can only hope that one day in the not too distant future, Meghan Trainor might pen something that focuses less on the importance of being the perfect wife, and more on helping girls to feel empowered in their own right. Here’s hoping…