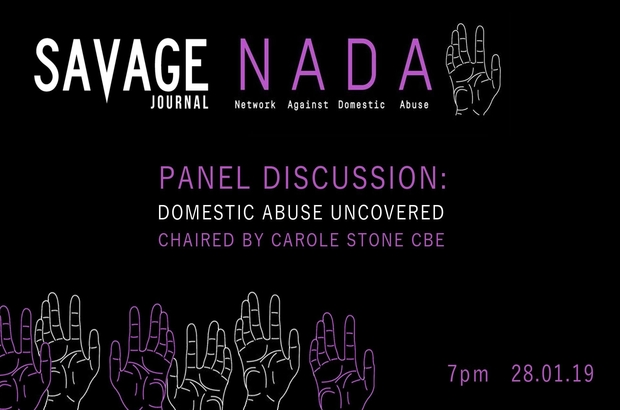 It is just after seven on a cold Monday evening. In the Sir Ambrose Fleming Lecture Hall, a steady stream of people filter in until a healthy crowd has assembled, talking quietly amongst themselves. The all-female panelists take their seats onstage, shuffling papers and surveying their audience. The crowd they face is peopled predominantly by young women, and yet a significant minority of men fill the seats, too. They have come to hear about issues surrounding domestic abuse.

After a slight delay, the room falls quiet and Carole Stone CBE kicks off the session. She introduces herself, giving a modest outline of her long and illustrious career. Stone’s principal interest is in bringing people together and opening up spaces for dialogue. After producing the BBC’s flagship discussion programme, Any Questions? for 29 years, she founded the Carole Stone Foundation in 2018 aiming to build connections and start conversations. She is also a patron of Cairn, a charity aiming to raise awareness for issues surrounding domestic abuse. She champions the power of talking, of sharing experiences, and of asking questions. It seems there is no person better suited to chair this discussion.

The mic is passed to Zehrah Hasan, a policy leader at Liberty, an organisation dedicated to challenging injustice and securing freedoms. Hasan begins by talking about the drafted Domestic Abuse Bill, branding it a ‘smokescreen for real commitment to change.’ She is keen to draw attention to the injustice of the government’s ‘hostile environment policy’ against immigrants, arguing that it ultimately places vulnerable women at higher risk of domestic violence and coercion. Women often fail to report domestic abuse for fear of igniting an investigation into their insecure immigration status.

Hasan says that it is vital to improve access to support services and refugees, and argues that the government’s whimsical approach to funding must give way to a dedicated long-term funding models if they really want to affect change. Her final point rests on the importance of the right of migrant survivors to remain in the UK, a right which is increasingly difficult to access for many women. Hasan’s introduction is grounded in facts and statistics, expressed with an eloquence and fluidity that is undeniably persuasive.

Next, Karen Ingala-Smith speaks. She currently works with nia, a service that aims to provide aid for women, children and young people who have experienced male violence. She is also the cofounder of Femicide Census. Ingala-Smith begins by criticising the statistics promoted on the event’s Facebook page. She claims that the ‘1 in 4 women and 1 in 6 men will experience domestic abuse in their lifetime’ stats are misleading, pointing out that they were lifted from an inaccurate 2008 report. Women, Ingala-Smith argues, are always the principal victims of domestic abuse, but that we can acknowledge this fact without devaluing or denying the fact that men also experience domestic abuse, albeit on a less prodigious scale.

Ingala-Smith’s argument hinges on the idea that domestic violence is a result of systemic sex inequality, and that the social construction of gender plays a critical role in determining the victims of domestic abuse. She rounds off her introduction by describing her work with Femicide Census, which sets out to count the number of women killed in the UK by male violence. What is now an official research project began as an informal study; shockingly, this is the only such database compiled on these statistics.

Next, we are introduced to Dr. Leone Tanczer. A lecturer at UCL, she has also undertaken extensive research into ‘tech abuse’. In layman’s terms, Tanker explains the Internet of Things (IoT). This is essentially the network of everyday objects (such as kettles, door locks, and cars) that have been computerised and connected to the internet, allowing them to send and receive data.

Tanczer concedes that tech abuse appears only in a minority of the overall number of abuse cases, however, she projects that the number of smart appliances in use will increase exponentially to 25 billion devices in the coming years. As such, she considers it important to be ‘two steps ahead’, legislating as technology advances, so that we are not caught out.

The final panelist to speak is Rebecca Rennison, a Hackney councillor elected in 2014. She discusses the secretive and enclosed discursive spaces that smother conversations about domestic violence. For contrast, she compares the discourse of domestic abuse to that of cancer, which is an open space in which people can share their stories. Domestic abuse is, according to Rennison, ‘an inside thing that isn’t discussed.’

The councillor goes on to condemn the ineffectual way that Westminster deals with domestic violence, pointing to the government’s failure to compile a central database capable of recording incidents of domestic violence. She also makes mention of the government’s merciless slashing of funding, reinforcing Hasan’s earlier point that change can occur only when the government opts to maintain a consistent and long-term funding plan. 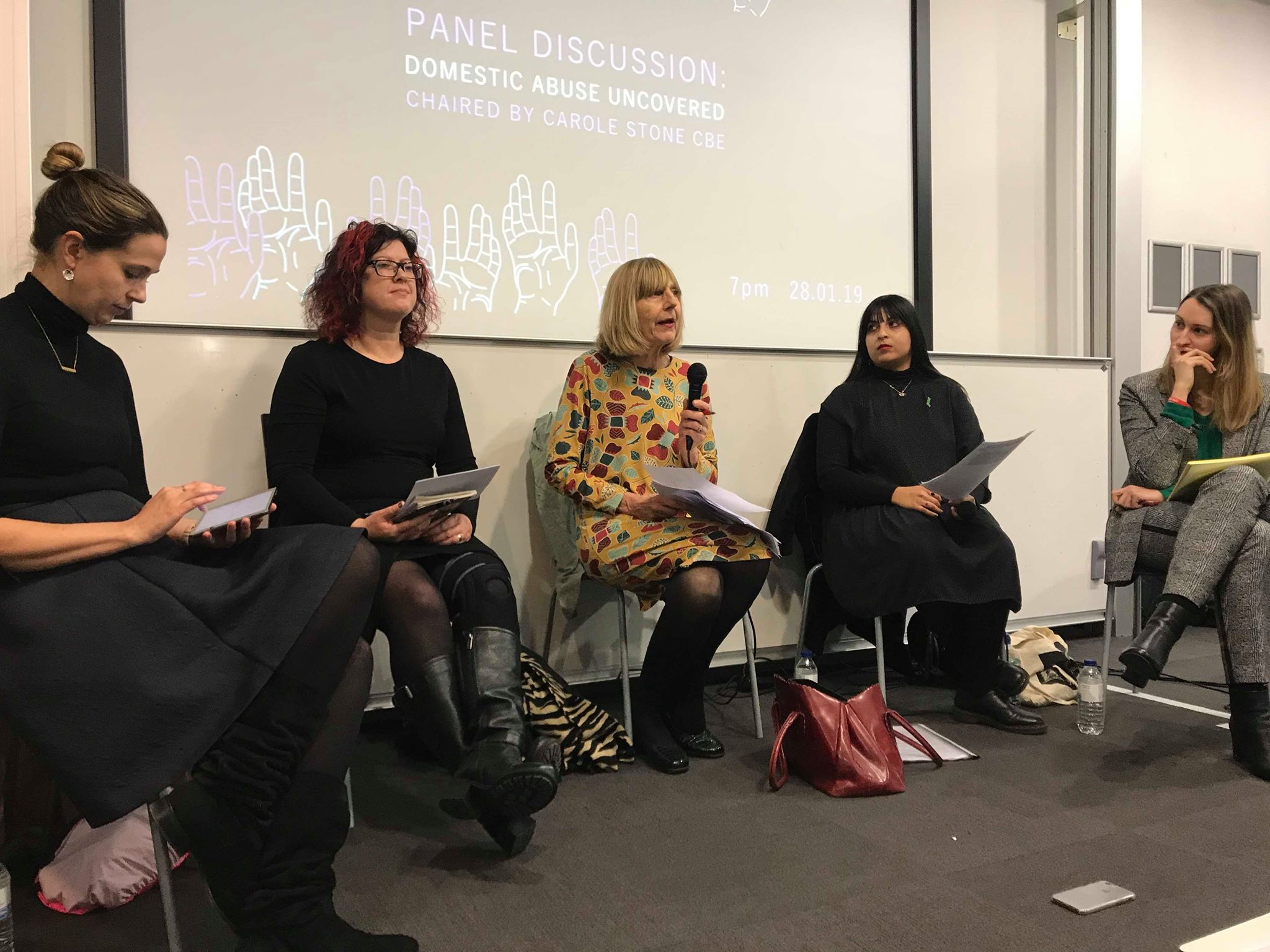 After this, Carole opens the discussion up to the floor. After a quiet start, the audience heats up, and questions are volleyed from all quarters. One audience member asks a question about the nature and the prevalence of domestic violence against men. Ingala-Smith responds that 6% of men that are killed are done so by an intimate partner, compared to a much higher percentage for female homicides. Hasan adds that in certain communities, men can be the victims of arranged marriages and honour-based crimes. These are instances of domestic abuse that must be taken seriously, she argues.

Another member of the audience asks about the ways in which to mitigate the psychological impact of abuse amongst victims. The answer can be summarised as: ‘we need more funding.’ Ingall-Smith fields a question about the role of doctors and nurses in detecting domestic abuse cases. Focussing principally on GPs, she answers that sensitive training (such as work done by the IRIS project) is vital in identifying instances of domestic abuse.

Hasan adds that the ‘hostile environment policy’ means that women from migrant communities are often afraid to talk to their GPs. This is because GPs are under an obligation to share information with the home office. Hasan laments the fact that GPs are ‘turned into border guards,’ and calls for an end to the policy.

Next comes a question for Tanczer: how can we legislate against tech abuse? She answers that we need to implement a code of practise for the IoT. Such a manual would provide instructions for designing features that make a device secure against abuse. She also argues that the government should provide specialist advice services for users of smart devices, so that people can understand their technology, and the ways in which they can alter their settings. These services must assess each situation individually to avoid any escalations of abusive behaviour from the perpetrator. Tanczer argues that it is vital to collect data on which platforms cause the most harm. These platforms could then be contacted and advised about ways to alter their services to mitigate harm.

Another audience member asks about the success rates of programmes that work with the perpetrators of domestic abuse. Ingala-Smith argues that ‘on a good day,’ only about 20% of perpetrators might change their behaviour patterns after accessing such a program. She points the audience to the Mirabal Project for further statistics.

A question concerning the role of the mainstream media follows. The panel unanimously condemns the media’s handling of domestic abuse cases. They perpetrate the ‘isolated incident myth’ and are ‘terribly racist’, always more interested in violence perpetrated against young, heterosexual white women, than against people who are older, or non-white, or part of the LGBTQ+ community. Hasan says that stories must be pitched to the media that give a more representative picture of domestic abuse cases and they in turn must handle them with fairness. Tanczer added that when dealing with domestic abuse stories, media coverage ought to include professional advice.

Many other interesting questions follow. The panel talks about the possibilities of intelligent learning apps that might stop domestic abuse. To this, Tanczer answers, ‘it is a societal problem, technology will not fix that.’ Hasan condemns the use of body cameras as a way of placing the burden of proof onto victims. She argues that one does not need to film a victim crying to know that domestic abuse has taken place. She also condemns the proposed use of polygraph testing of perpetrators as utterly ineffective. Next comes a question on the effectiveness of police responses to domestic abuse cases. The answer is a unanimous response that the police still have much more work to do before their responses can be considered adequate.

By this point the discussion has overrun: the time is ten minutes to nine. Apologising for the deferred ending, Carole Stone wraps up the session. She says she is pleased by the amount of ground covered during the discussion. The panel is applauded heartily, and people begin to gather up their things. As the audience files out of the room, many are caught up in intense discussion and absorbed debate. If the panel’s aim was to open up discursive space in which to talk about domestic abuse, it has certainly succeeded. The crowd exits the building with a new and galvanising sense of how to define domestic abuse, and how to fight it.

To find out more about UCL NADA or to get involved, visit their Facebook page.

If you or suspect anyone you know is affected by any of the issues discussed above, please contact: