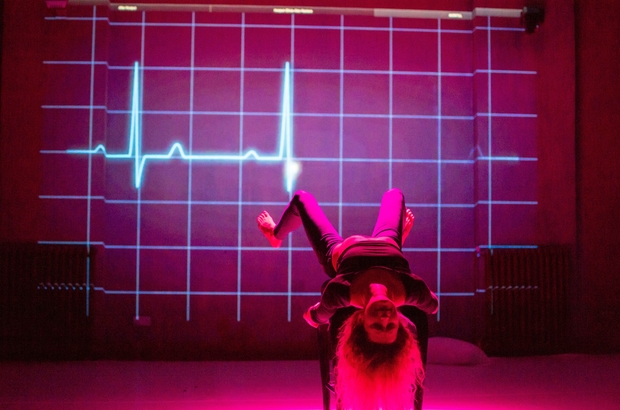 Anybody acquainted with the one-woman show aired in Friends will understand my apprehensions before arriving at I’m Woman, written and performed by Ana Daud. Thankfully, my uneasiness about the format was quelled, as this engaging, emotionally effective play was nothing like that. The men in the audience were instructed to sit on the left, with the women on the right, highlighting the play’s exploration of the differences between men and women, and how we perceive one another.

Initially the play was a biographical examination of Daud’s parents’ respective addictions and how they influenced her becoming an addict herself. The play asked whether we are responsible for our own actions, or whether our parents or environment are to blame, furthermore implicating God as culpable for her experience, raising the issue of accountability. Daud, through Dmitri Acrish’s direction, directly confronted the audience with this question, breaking the fourth wall and addressing the audience as ‘daddy’, making us feel partially responsible for what happened to the character. The idea of audience culpability was made stark by the narrative’s reality, as both Ana the actress and the character performed a series of events that took place in the past but now existed in the present. This duality conveyed to the audience with greater intensity a sense of Ana’s pain.

The play goes on to engage with themes such as anorexia, abortion, and prostitution. However, despite its social relevance, there was something which was not quite right. The overambitious presentation of too many themes resulted in the play failing to deliver a clear message. The piece could have been more effective if it had represented one point properly; in trying to cover too much, it spread itself too thin.

Despite the problem of overambitious subject matter, the production’s creativity was truly admirable. Although there were some technical issues, the audience were made to utilise a number of different senses through the use of a microphone, music, projection and the peeling of an orange. The use of physical theatre throughout channeled the character’s emotion and effectively conveyed feelings too enormous to be put into words. The play presented the audience with various inspiring messages including ‘we should all understand each other’ and ‘you deserve to live,’ as well as exploring the insecurities of women and the view of women as objects of sexual desire. For example, Daud would repeatedly get on, or simply step over, a pair of scales, clearly pointing to underlying insecurities, with which many women struggle, through her movement, even while speaking about a different topic. She did not stop there. As she approached the male audience members she spoke profoundly of the ways in which women are fearful of men including ‘we are scared our cellulite will make you lose your libido.’ Furthermore, the piece touched on the idea of toxic masculinity in recognition that relationship anxieties do not exclusively belong to women.

This gave the play a poignancy that redeemed it from its initially overzealous nature. The moving ending was emphasised by Daud moving into the audience, introducing a new level of intimacy, and giving the impression that each performance would be somehow unique. Daud furthered this with her refusal to shy away from encouraging the audience to respond to her and even by inviting an audience member onstage. This interactivity allowed each audience member to feel a personal connection with I’m Woman. After Daud exited the stage, the audience were left with a graphic video montage of women giving birth. This highlighted the raw and personal reactions the playwright sought to draw through the piece; be it inspired or disgusted, each audience member left the theatre with a strong emotion sure to last, ensuring that it will be a long time before they forget I’m Woman.