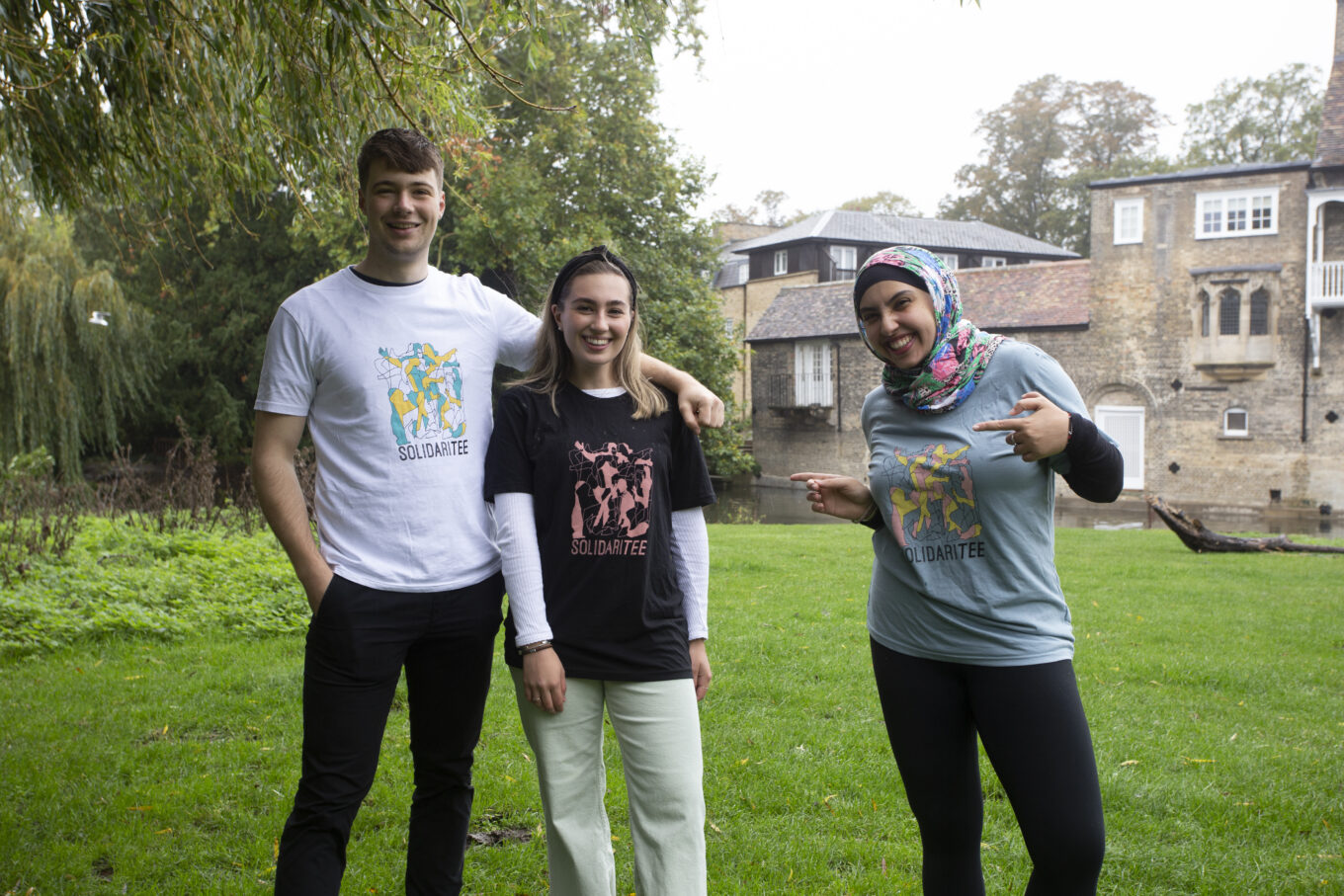 SolidariTee is a student-led charity which aims to raise awareness and support for the refugee crisis, by offering grants to NGOs who provide legal aid to asylum seekers in Greece. ESTHER THOMAS, the Head Rep for SolidariTee at UCL, spoke to ALEXA NETTY, sixth-year vet student at Cambridge and the executive director of SolidariTee, about the charity.

How did you first get involved with SolidariTee?

Before I did SolidariTee, I was president of the TEDxCambridgeUniversity Society. I organised the 2019 TEDxCambridgeUniversity conference where [SolidariTee’s founder] Tiara Sahar Ataii was invited to be one of the speakers. We were working on her talk together over a few months as I helped her to draft and hone the message, so I started to learn more about SolidariTee’s work and personally felt quite compelled to act. The charity was expanding really quickly at the time, so they were looking for new people to join the team and I was fortunate enough to have been able to get involved.

Yeah, I watched Tiara’s TEDx talk and it was quite incredible. What do you think sets SolidariTee apart from other charities which focus on the refugee crisis?

I think it’s a few things. Firstly, the student-led element. Whilst not a solely SolidariTee thing, I think it’s one of our most powerful tools. Students are not only really creative, but also have real will and determination to make a change. I think giving students the route to do that now is really key. Secondly, the fact that we are a grant-giving organisation also makes us quite different, because we’re not working in Greece ourselves, and I think the ability to raise awareness from a step back and create a campus presence and community is therefore very different. And thirdly, it ensures that when we give money, we support projects where we really feel that we can have the largest tangible impact at that moment in time.

There are new organic t-shirts available now. What’s the story behind their design?

I came across this design in person this summer. I was visiting Thessaloniki, which is a region of Northern Greece, to meet and learn from some of the NGOs working there. This particular design was created at a centre called Elpida Home, which is an incredible community centre that does lots of things, from psychological support and medical advocacy to art workshops. When you go into the centre, as you open the doors, there is a lifesize image of multiple figures on a massive white wall [pictured above]. You can see what look like heads and arms in all sorts of shades and colours. A group of twelve refugees and asylum seekers who had attended one of the art workshops had all stood against the paper with different poses and outlined and shaded in the overlapping segments. It was very beautiful in person, and to me represented this real sense of simultaneous unity and diversity. So that was turned into the design for our latest t-shirts. I think you can definitely see that in the design, those different shapes and colours representing everyone’s different stories.

When you were in Greece, did you speak to refugees and asylum seekers?

I met a few but we had to be really careful – partly because of COVID-19, but also because I was only there for a short time to learn more about the work being done. I wasn’t there long enough to volunteer, and I’m not a lawyer or a translator. I wanted to be careful that my ability to come and add value to the conversation back in England didn’t come at a price of exploiting people’s stories. But when I was at a particular community centre, they were running one-to-one language classes. I got chatting to a young guy, probably about my age, who had come in waiting for his class. I learned that he had just received a rejection on his asylum application. He had already been in Greece for several years with his family after they fled persecution and all of them had been granted asylum except for him. Since he was over eighteen, his application was considered separately from his family’s; he was considered as an individual and not as a child. I remember feeling this renewed sense that legal aid really is the key here, as what had happened to this young man was so devastatingly unjust.

What do you think are the main misconceptions that people have, especially people in the UK, about asylum seekers and refugees?

The biggest one I still hear is, ‘well, we just can’t possibly take people here, people are arriving every day and I get that it’s terrible for these people, but we just can’t have them’. But really, far less than one percent of the UK’s population is made up of refugees (0.26% as of 2018). When you think purely in these terms, the numbers of refugees and asylum seekers who reach the UK are so small compared to, say, Greece or Turkey, that that argument doesn’t really stand up. But I think one of the biggest misconceptions is the belief that there’s even a choice in the matter. The refugee crisis is often depicted in the media as though there’s an ability to decide whether we ‘should’ or ‘shouldn’t’ receive refugees or asylum seekers. For me, there’s no debate about it, because that’s international law. You have the right to seek asylum in a country you feel safe in, and that’s actually the end of it.

There seems for some people to be this block, a moral and empathetic block, in attitudes towards refugees and asylum seekers. I find that quite difficult to understand, how there are people out there that just seem to lack empathy in this situation.

It’s a very difficult one, because sometimes people refer to the refugee crisis as a crisis of compassion. I think that maybe is one aspect. But I think that often, it can stem from a fear, a misplaced fear of the unknown, always giving in to these myths that, for example, the economy is going to collapse, and we can’t possibly have asylum seekers come to the UK. But one of the things that I found, personally, is that you can actually take that element out of it, because it kind of doesn’t matter whether you think it’s the right thing to do or not, or whether you think we’ve ‘got room’ or not, because again, it’s international law. According to the 1951 Refugee Convention, a refugee is ‘someone who is unable or unwilling to return to their country of origin owing to a well-founded fear of being persecuted for reasons of race, religion, nationality, membership of a particular social group, or political opinion’. Under this convention, the right to seek asylum is protected internationally, and asylum seekers are protected from being forced to return to a country where they would face persecution.

Something that I learnt from Tiara early on is that it also shouldn’t matter on the same principle, whether someone is a young child trying to arrive in the UK or a much older adult, or whether someone is especially accomplished in their field of work or not, because it’s a fundamental right to be allowed to seek asylum.

How do you see SolidariTee expanding in the next couple of years?

I see SolidariTee doing three things this year and in years to come. It’s really important to me that we raise as much money as we possibly can for legal aid. I also really want to empower students – not only our volunteers, but people who engage with us as the next generation of teachers, policymakers, voters and industry leaders, to go and stand up for human rights. That could be refugee rights, but it could also be other causes that are important to them, throughout their future lives. I really see SolidariTee continuing to grow: my vision is that when you stop one hundred people outside the SU, ninety-five, ninety-six of them know what SolidariTee is, and also know that we’re more than just a t-shirt charity – they know about legal aid, too, and they know about why that’s important.

You can find out more about SolidariTee, and buy their t-shirts, at www.solidaritee.org.uk.