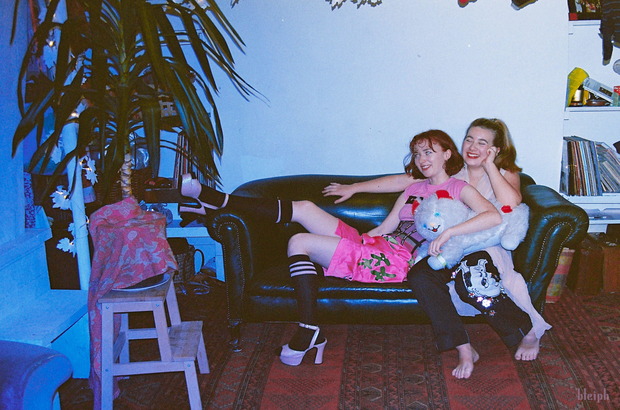 PERA CUMUR interviews the enigmatic duo that are: Mermaid Chunky

How would you describe Mermaid Chunky in 3 words?

Moina : Frantic
Freya : Yeah frantic, remedial homework.
Moina : ‘Too much fun’ is one word
Freya : It is

How did you two meet?

Freya : We both grew up in Stroud, but we met in Brighton four years ago. I was studying music in Brighton and Moina just kept showing up
Moina: First proper day we spent together we were sitting on Brighton Beach. It was so sunny and beautiful … then I looked over at Freya and she was just totally engrossed in a very freak, baby blue gameboy. Thats when I knew she was one to keep an eye on, lots of surprises in store, too exciting for me.

Tell us about the craziest performance you’ve done

Freya : I think it’s probably the Tiny Dog Wedding. We put on a dog wedding event and there were lots of tiny dogs. We even flew a pastor in from Vegas.
Moina : Okay, maybe this needs more explanation (laugh).
One day, artist Holly English, my good friend and studio neighbor, found a whole box of tiny ceramic dogs. We realised two of them in particular were deeply in love and needed to be married. Me and Freya got very involved in musical ceremonials and decoration to create this marriage for those two tiny dogs.

How do you think fashion plays a role in your project?

Freya : We started off with costumes way back in the beginning.
Moina : Last year, we sewed ourselves medieval get ups for our annual Winter Solstice event ‘The Darkest Night’. They were all covered in these long spiraling strips of wool. Freya accidentally put the needle through the middle of her finger whilst she was sewing her woolen trousers. She just kept sewing though, she knew how important it was to get the costumes done before the solstice sun rise. I guess that gives you a sense of how integral costumes, sculptures and films are to us.
Freya: We are currently working with fashion designer Milligan Beaumont. She’s incredible. She moved to Stroud last year.
Moina: It’s very tingly spotting a new young face in a small hometown of very familiar characters. Milligan’s got such a look … as soon as we saw her we knew she had something exciting going on. Her work is really taking off this year, her graduate collection has been touring with Christina Aguilera.
Freya: We’ve worn her garments for special performances. Her signature style is really heavy embroidered jackets and kimonos […] Moina: Ooo also we’re recording some tracks with Capitol K soon and ‘These Girls’ track which is to be played as part of Flo Grellier’s St Martins fashion show. (laughs)

What is your greatest inspiration?

Freya : I think reading Viv Albertine’s (ndlr : guitarist from the all-female punk band The Slits) book was really good because all the stages of her life are so interesting. She completely stopped doing music for years and then she was really heartbroken she couldn’t do it so she went back to it. I’ve had sort of a slightly similar thing with when I graduated from music school doing classical piano and really injured my hands. I had to stop for ages so Mermaid Chunky rose from the ashes. You can always evolve and do something new and come back to it.

Do you have a dream place to perform at?

Moina : Maybe a floating one… Like a sea one nighttime
Freya : On a bit of foam cuz it’s the middle of the ocean
Moina : It’s all very spongey, like soaking up all the… Yeah, frantic playing on a piece of sponge

Where do you see yourselves in five years?

Freya : Late Junction
Moina : On a Wednesday
Freya : In the morning. (laugh) Yeah just keep going with it and keep performing in 5 years.
Moina : It’s just really exciting to have this chance to bring people all together. Mermaid Chunky is us two but it’s also a platform to meet loads of really great people and just showcase what they are doing and bring all of that together. We’ve collaborated with some amazing artists and film-makers like Alex Merry, Verity Monroe, Megan Crua, May Darbyshire, Jessie James, Jessie Evans, Bert Mclean, Isobel Ann

Joy Harper, Sean Heather, Kate Merry. It feels like a big stew that everyone is slopping around in … swanning together to share all the flavors. The artists we’ve had the chance to perform with in the past few years has been so inspiring … Yama Warashi, Comet is Coming, Anchorsong, Capitol K, Ariwo, Boss Morris. Ooo … we are also about to record our first EP with Capitol K … that feels like a very stone carving kind of thing, which may uncover lots of fresh, spritely crystals or something like that. Who knows what will happen in five years, I just know we are having such a lush feast right now, it’s such a party … everyone needs to join in.