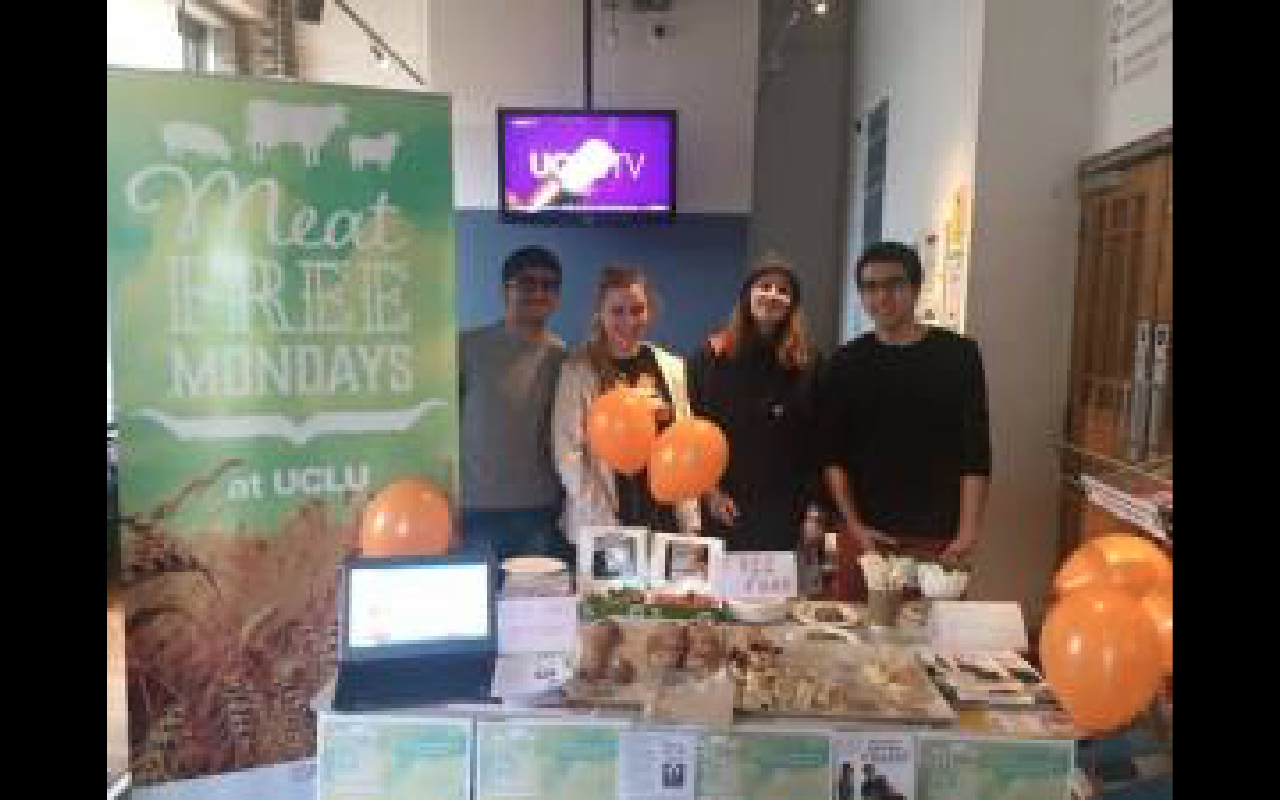 September is often associated with new beginnings, especially for students. This year it marked the inaugural ‘Meat Free Mondays’ for the catered halls of UCL. When you’re bereft of your bacon on Monday mornings and served Quorn lasagne in the evening, you may wonder why your meals are meat-free. The answer lies in the student-led campaign which, after earlier success when introduced to UCL’s cafés, was introduced to our catered halls at the start of this academic year. The campaign addresses both health and environmental concerns over meat consumption, yet remains something of an anathema for many of those subject to catered accommodation. Upon speaking to students at Ramsay Hall, I discovered a wide range of opinions on the topic.

A lot of students seemed to believe that their halls had only implemented Meat Free Mondays in order to ‘cut costs,’ calling the campaign a superficial money-saver. However, Yash Mishra, the former president of UCLU’s Vegetarian and Vegan society and leader of last year’s campaign, insists that this could not be further from the truth. He states, ‘Meat Free Mondays was a student-led initiative, it came from students and was passed by the Union council – which is run by students.’ He further stated that the campaign was in no way a means of converting students to vegetarianism, but instead an initiative driven by environmental and health concerns. UCL’s Green Party, Fossil Free, and Medicine societies even opted to collaborate with the project due to its myriad benefits.

The World Health Organisation recently released a statement claiming that red meat is as carcinogenic as cigarettes, alongside with being a leading cause of heart disease and high cholesterol. This sparked a proliferation of similar ‘meat-free’ campaigns online. However, the implications of eating meat go far beyond just these health concerns. Reducing your daily intake of meat significantly impacts your carbon footprint. In light of this, the buzz surrounding the recent Netflix documentary Cowspiracy is more than merited. Cowspiracy explores the implications of meat consumption within western societies, exposing the organisations that conceal how unsustainable animal agriculture really is. Even the Food and Agriculture Organisation of the United Nations (FAO) has acknowledged that the livestock sector is one of the ‘top two or three most significant contributors’ to the most damaging environmental problems ‘at every scale from local to global.’

New research into the impact of frequent meat consumption has revealed that one meat-free day a week reduces your total water usage for that week by 3360 litres. That’s the equivalent of 54 showers on average. This is because animal agriculture uses up a third of the world’s fresh water every year. A shocking 3000 litres of water goes into producing just a third of a pound of meat. This figure includes the irrigation of grains and grasses for feed, plus the water needed for drinking and processing and again equates to a month’s worth of showers. The environmental impact of meat consumption does not stop there, however. Other negative effects include excessive CO2 production, methane and nitrous oxide pollution, the pollution of streams, rivers and oceans; the destruction of rainforests and wildlife habitats and further threats to endangered species. The makers of Cowspiracy have created an infographic as a helpful visual aid in considering the sheer scale of this issue, which you can view here.

Despite this, many students remain unimpressed with the mandatory meat-free meals. Some expressed distaste at the lack of meat, whilst others cited a lack of variety as the main issue. A former vegetarian student argued that those contemplating vegetarianism are not exposed to what a balanced vegetarian diet looks like. The vegetarian menu varies from week to week, but there are typically four different options, ranging from ‘sweet potato and courgette tagine’ to ‘stilton, walnut, and rosemary tart.’ If these options, labelled by some Ramsay students as ‘innovative’ and ‘adventurous,’ don’t satisfy the meat enthusiasts amongst us, a fish option remains. Perhaps this is just a matter of taste, but it also raises an opportunity for discussion. Rather than advocating a complete rebuttal of the campaign, why not propose alternatives? If greater variety is all you crave, this is no reason to become disillusioned with Meat Free Mondays.

Other arguments included those which plague vegans and vegetarians on a regular basis, concerning the lack of protein that comes from an absence of meat. However, this is no more than a common misconception, as protein can easily be derived from vegetables, nuts, beans, and grains. There are also many vegetarian and vegan athletes, such as Brendan Brazier, Rich Roll, and Jimi Sitko, who are changing the widespread fallacy that a vegetarian diet cannot provide sufficient protein.

As Mishra says, a university like UCL, which claims to educate ‘future intellectual leaders,’ should set an example for others to follow. It would be wrong to remain in the dark about the serious effects excess meat consumption can have on our planet and health. Regardless of UCL students’ dubiousness, the movement has certainly set the intended example: LSE recently incorporated it into their catering and King’s College London, SOAS, and City University have started their own campaigns. The campaign leader added, ‘by not serving meat, every participating food outlet at UCL has reduced its weekly carbon footprint by as much as 15%,’ showing that it has already made a difference.

In the wake of the recent catering survey, changes have been made to the Meat Free Mondays programme in UCL residences. Breakfast on Mondays will now include chicken sausages, and dinner will feature a chicken option. Imogen Resnick, Co-Founder and Campaign Manager of Meat Free Mondays, issued the following statement:

‘We are neither surprised nor disheartened by the mixed results of the survey. Meat Free Mondays is a big change for the catering staff to adjust to; they are still tinkering with new menus and recipes. One additional meat option has been added to provide a familiar choice for students as they acclimatise to university life. Hopefully, with more student engagement and increased awareness, as well as menus being adjusted to cater for students’ preferences, we can re-evaluate in the second term. Despite the halls no longer being entirely Meat Free on Mondays, three vegetarian options is a massive success: we are delighted that the Halls have embraced environmentally-sustainable change. We started a year ago from nothing – we are proud of every step made in the campaign and its influence on other universities.’

This change of menu is clearly troubling for those who are supportive of the movement, and it is unfortunate that the plethora of arguments in support of Meat Free Mondays has not been widely, nor favourably, received by the majority of catered students. However, it is, and is likely to remain, a hot debate in the media. The scepticism in UCL’s catered halls reflects the general difference of opinions surrounding the matter, but it is crucial to at least explore what campaigns like Meat Free Mondays truly stand for. Awareness of the adverse affects of excess meat consumption is key to action against it.

If you would like to find out more about Meat Free Mondays, you can visit their website here.