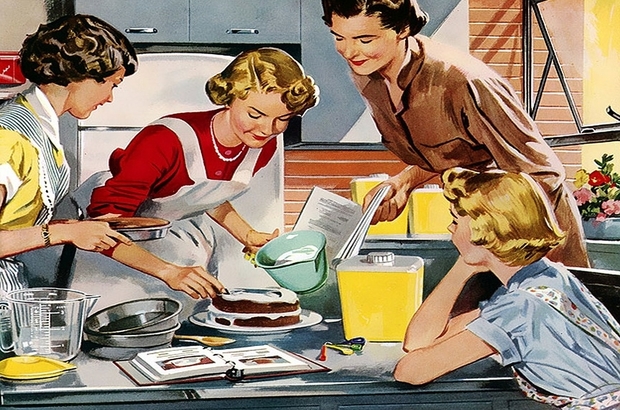 ANYA JOHNSON looks at the ins and outs of the enduring stereotype of the woman in the kitchen.

One of my mum’s favourite things to do before she goes to bed is to scroll through recipes that the Guardian puts online from time to time. My dad loves to do the same. But I’ve come to notice that only one party is able to put this pastime into practice.

I have either cooked with most of the women in my life or eaten food that these women have cooked for me. I’m not sure I could say the same about the men in my life. I’ve found that man’s transition into the kitchen requires two things: a willing man to do some cooking and a willing woman to let him. I fear there is inequality in the kitchen, and I argue the unwilling woman plays a role that society has overlooked.  And while feminism seems to infiltrate just about every conversation today, the kitchen seems a shockingly obvious place to have missed out on.

Equality between sexes comes in part by quelling expectations we have of one another. If we expect women to organise all production of food, cooking is the weapon and women are the victim. On the flip side, if the past has shunted women into the kitchen, perhaps it was the only domain she felt she owned, controlled, and belonged in. If women were expected to be domestic goddesses, then they took advantage of what little perks that expectation brought: the chance to be better than men at something and to have a role that men couldn’t fulfil. And in something as crucial as nutrition. Whether women rose or fell to the title, both situations are indeed anti-feminist, as is the case in most of history.

Present day, cooking can continue to be anti-feminist if women are possessive over the kitchen. The feminist movement has taken great strides in the last 20 years and today women’s influence extends through a large reach of society. But letting go of the kitchen they were once bound to has proven to be difficult in some cases. Many men enter the kitchen under the watchful eye of their wives; they are given abuse when they try to cook and through fear of getting something wrong are subsequently shunted away. The result is two-fold. Unsurprisingly, women resentfully remain the head of the household meanwhile men still don’t know how to cook for themselves (at least in the way their wife deems appropriate). It’s a cycle that needs to change.

Except cooking can also embrace feminism. Gender equality also comes from having choice. Cooking can represent this choice; a choice over what you want to put in your body, and a choice over what you want to spend your money on. Producing a pleasing and nutritious meal can be empowering, especially when shared among others. But if women are allowed to benefit from cooking, then men should be too.

Chimamanda Ngozi Adichie got it right when she highlighted an expectation in women to micro-manage the house. She asks whether it would be so bad if one’s husband didn’t wipe their baby’s ass the way his wife does. The same applies to the kitchen. The result is men being pushed out of the kitchen and into other, more ‘manly’ domestic chores (collecting wood, setting up electronics etc.) solely because a woman anticipates man’s failure before it even happens. So I call it unfair when I do more laundry and cooking than my brothers. But can I blame them if they’ve actually been pushed away from doing such chores?

This may seem blindingly obvious and a non-issue today but have a think about it. It definitely happens. I was thanked for being ‘competent’ in the kitchen the other day. That is, I have a knack for practical but menial tasks like replacing the rubbish bin liner after removing the rubbish or putting serving spoons in the correct drawer. A true compliment. The significance of it, however is huge: I’m not shunted out of the kitchen when push comes to shove. Instead, I will probably learn how to make a roast ‘correctly’ and will probably cringe when someone does it ‘incorrectly’ in front of me later in life.