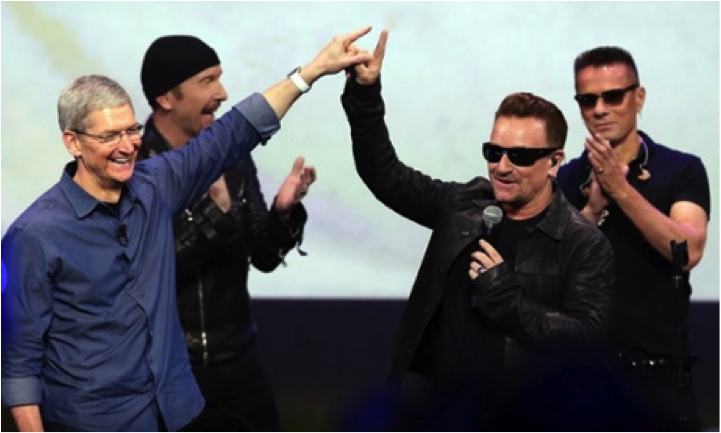 EDIE JEFFERYS looks at our decreasing privacy in an increasingly technological world.

The U2 automatic album download was like finding a bug in my Sainsbury’s meal-deal or accidentally sending an email to “all students” (Bello?). I knew it happened, but I never thought it would happen to me. Witnessing the Twittersphere explode with outrage at Bono’s boldness, I mused sympathetically and returned to my bug-free sandwich. Cue my horror a few hours later as I scrolled through my iPhone to find that yes, indeed, Apple had forcefully lumbered me with U2’s latest album Songs of Innocence. The worst had happened.

Figures released by Apple on Friday 10th October show that Songs of Innocence has been downloaded by a reported 26 million people worldwide, making it one of the most popular albums of all time. Funnily enough, Apple neglected to release figures of how many customers visited their support pages – which had to be specially set up – to remove the unwelcome ‘gift’. Anyone who had the “Automatic Downloads” feature in their iTunes, iPhone or iPad switched to ‘on’ was burdened with 12 of U2’s most recent songs, whether they liked it or not.

And my personal favourite:

Of course, there were some people who welcomed Apple’s intrusion. To the U2 fan and/or sympathiser, Apple had bestowed a free musical gift unlike any before, conveniently placed on devices without any effort from the consumer. For everyone who danced to With Or Without You at their wedding or named their dog The Edge, it was like Christmas come early. It’s fair to say that many of the negative responses were down to personal taste in music. Perhaps if Beyoncé had done the same with her latest album, Twitter would have produced some different results.

Although I’m not a U2 fan, it wasn’t so much the music that annoyed me but the fact it was there in the first place. Like many, I had unknowingly agreed to let Apple govern a device I thought was mine alone to tamper with. U2’s Songs of Innocence caused outrage because ultimately it is an obvious example of an invasion of privacy. I only needed only to scroll through my embarrassing music collection to find cold hard evidence of Apple’s control over my devices.

Unfortunately, it’s difficult to place all the blame on either Apple or U2. If I had bothered to read the terms and conditions when I signed up to iTunes I would have probably known what to expect, or at least known how to prevent the U2 invasion. If I had spent an afternoon meticulously reading Apple’s iPhone jargon, I would have been fully aware that the “Automatic Downloads” feature existed.
But I suppose the real question is who really bothers to read the terms and conditions? How much attention do we pay to what these big companies want us to consent to? And how much of our privacy are we sacrificing in the process?

I recently attended a lecture about privacy at Cheltenham Literary Festival, in which one of the speakers gave a simple demonstration of how readily our information is given out without our consent. This only works with iPhones and if your software has been updated in the last twelve months, but the results make for some uncomfortable realisations. If you go to Settings, scroll and click the Privacy option you’ll see an option called ‘Location Services’. If they’re ‘On’, click this and scroll to System Services. Within this option, scroll to and select Frequent Locations. Under the History subsection, you should now be able to see a list of locations, all of which your iPhone would have registered without you having selected anything. For example, my history shows the exact location of a bar event I recently worked, including the exact time I arrived and the exact time I left. As I was working I didn’t use my phone once that evening until I got home… but Apple had my location anyway.

The idea of someone knowing exactly where I am, on what day and at what time, is a clear invasion of my privacy. It’s not like I’m someone’s secret lover, dealing drugs or smuggling exotic animals, but I still don’t want someone at Apple to see where I go to university or where I live. The problem is I don’t know at what point I subscribed to letting Apple know this information. How many other things does my iPhone reveal that I’m not aware of? Will someone at a desk in some corner of the world be able to see that I bought a coffee from the Print Room this morning? Will they know I haven’t done the reading for my seminar tomorrow? Where does it end?

A recent experiment sponsored by the security firm F-Secure showed that several people in June signed up to a free London Wi-Fi service, and by accepting the terms and conditions agreed to give away nothing less than their eldest child. This is of course an extreme example, but it goes to show how little we pay attention to the terms and conditions we accept. Apparently we’ll agree to anything to get the latest phone or some free internet access.

Hopefully, the next time another obnoxious pop star releases an automatic download album we won’t be so surprised. As annoying as Songs of Innocence may be, it’s raised an interesting point. How much do we really value our privacy? And how annoying is Bono? The debate continues.