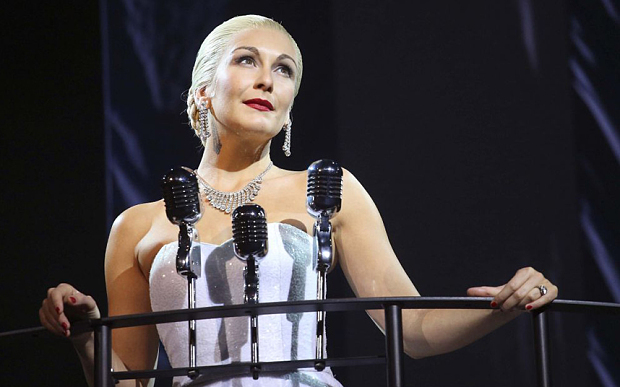 NIALL ADAMS reviews the musical ‘Evita’ at The Dominion Theatre.

The last London revival of ‘Evita’ closed just seven years ago; it would be forgivable to assume that this new production is merely a quick turnaround to cash in on the musical’s 25th anniversary. Admittedly, Bob Tomson’s direction is fairly by the numbers and does not revolutionise the West End musical. Yet the production’s shining cast, led by Madalena Alberto, makes the show exciting once again.

‘Evita’ tells the historical story of the rise and fall of Argentine leader Eva Perón (Madalena Alberto). Following her early years in poverty, Eva rises up the social ladder and achieves political fame and glory through her marriage with President Juan Perón (Matthew Cammelle).

Alberto is a true star in the title role and leads the cast with exhilarating energy. As Eva grows from a naive and wide-eyed teen into a calculating and ruthless leader, Alberto gives the audience a versatile and nuanced performance showing every flaw in her character. Her voice soars through Andrew Lloyd-Webber and Tim Rice’s music and Don’t Cry for Me Argentina is as much of a crowd pleaser as ever.

Meanwhile Cammelle brings humanity to a role which would otherwise be pretty unlikeable, and Ben Forster’s Magdali performs all of his numbers admirably. Perón’s mistress (Sarah McNicholas) also stands out. Her haunting rendition of Another Suitcase in Another Hall received a much deserved standing ovation from the crowd, and it is a shame her character has such a small role.

The ensemble are equally fantastic, and the group numbers such as Buenos Aires and Rainbow High, were all highlights from the show, with the entire ensemble enthused and energetic throughout the two and a half hour show. Bill Deamer’s choreography, blending motifs of both Latin dance and the tropes of musical theatre numbers, was a delight with old standards of the stage feeling fresh and new.

There are two major flaws with this production, however. Firstly, the jump straight from a tour to the West End, has left the show feeling minimalist and small compared with its London neighbours. The sets rely largely on several interchangeable pillars and movable stairs and balconies to recreate different locations. Although this would probably work well on a regional theatre, in the much larger Dominion the production felt dwarfed by the stage: a more intimate venue would serve ‘Evita’ in this form much better. 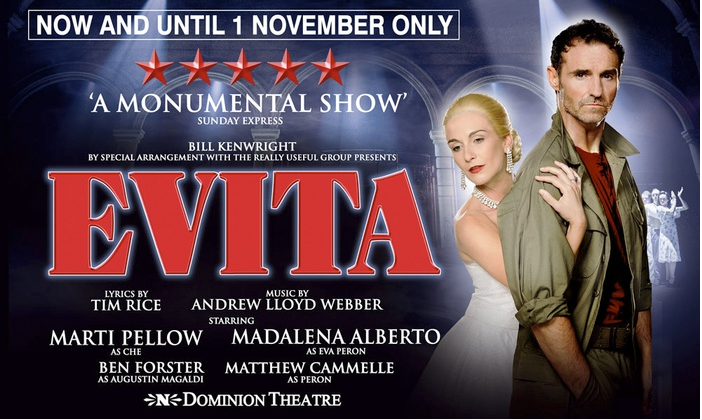 The real issue though comes from Marti Pellow’s Che; the omnipresent narrator of the show and representative of the common Argentinian people needs a performer with both a versatile voice and good acting skills. Pellow, unfortunately, has neither. His technique of showing anger by shouting through the lyrics made it difficult to understand the words throughout most of the show, and left the production’s opening feeling flat.

Despite its flaws ‘Evita’ still shines. Lloyd Webber and Rice’s libretto is as powerful as ever and Alberto is phenomenal as Eva.

The show is in London until November 1st and is definitely a must-see for fans of musical theatre. For more information and tickets, please click HERE