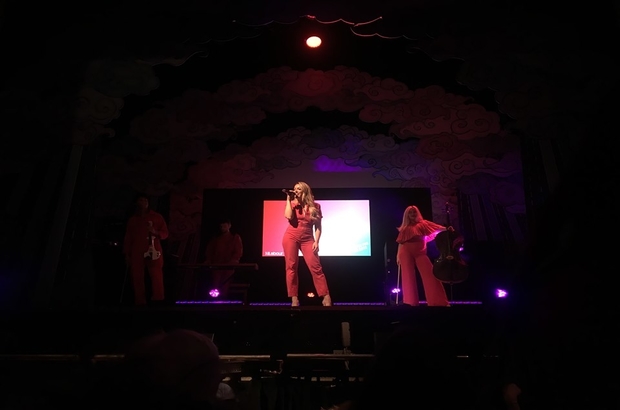 As the Overground train draws in to Stratford, the night sky is pricked by high-rise towers of glass, concrete and chrome. Just outside the station, the shopping centre buzzes with life, its glitzy Christmas lights foregrounded by the glow of the Westfield sign. Baptised in electric, commercial light, Stratford feels the seat Modern Times: animated, wealthy, state-of-the-art. But as we trace our way along the cycle path towards the Theatre Royal this illusion falters and falls apart. A homeless man huddles in a doorway on a cardboard box. Cyclists zip by in turquoise, the colour of the Gig Economy. Their jackets flash in the glare of headlights and insulated cuboid bags upon their backs bear the Deliveroo sign. On Angel Lane a yellow sign reads ‘Unite Students’. With a typical room costing around £219 a week, it seems these halls must principally unite the wealthy.

On arrival we’re ushered into a world of rich red furnishings. People talk and laugh about the edges of the room as we take our seats. The stage is framed by a gilt arch, set with rolling cartoon clouds. Just off-stage, a cameraman sets up. Tonight the main event is the unveiling of Labour’s Charter for the Arts, which pledges funding for artists of all ages and backgrounds. This east London theatre has been carefully chosen as the place to stage the party’s ‘cultural renaissance’. Corbyn makes his way through the crowd, pausing to shake someone’s hand. The lights dim, and the evening begins, but not before we’re reminded that beneath its polished surface, Newham has one of the highest child poverty rates in the UK.

The night is star-studded and comedian Rob Delaney kicks it off. Having lost his son Henry to cancer in 2018, he describes the importance of creativity in the grieving process. In a recently-released video on the NHS, he urges his audience to think of him as ‘a ghost of Christmas future, as someone who has experienced a private healthcare system [in America]’. In the aftermath of Henry’s death, Delaney’s children drew pictures to express feelings they couldn’t articulate; he found reprieve in writing the fourth season of Catastrophe. Lily Allen similarly champions music for its ability to express the otherwise inexpressible, ending with an earnest endorsement: ‘I back this manifesto 100%’.

Ken Loach takes to the stage to invoke the spirit of Labour’s 1945 Manifesto, and laments the steep decline of pupils enrolling in arts GCSEs. ‘People need bread,’ he says, ‘but they need roses too’. Next comes Maxine Peake, reading Shelley’s Mask of Anarchy, then Billy Bragg, Jaime Winstone, and Maverick Sabre. Kidulthood’s Winstone was enrolled in a dull college course when she decided to pursue a career in acting. Dyslexic, the arts offered her an alternate route to success. She mourns the loss of the Film Council, which funded British Film during her early career, and reflects that without that fund, some important films would never have been made. State-school educated at Enfield County School, it is difficult to know how Winstone would have fared as a young actor in today’s climate. A 2016 study from the London School of Economics and Goldsmiths College found that 73% of actors are privately educated in the UK.

M.I.A. also attended a comprehensive school. She had a childhood funded by Merton council: they paid for ‘your uniform, your food, everything’, she says. She describes the estate on which she grew up in the eighties, remembering that ‘everyone was a skinhead’. A frightening prospect for a young South Asian woman. As a teenager, M.I.A. was ‘constantly trying to drop out’ of school. It was only the youth clubs that kept her going back, she says. Run by less conventional adult figures (like ex-convicts), she found people she could respect- and who respected her. In the past decade, these youth services have been decimated, their funding cut by 69%, from £7.79 million in 2010 to £2.24 million. In light of M.I.A’s encomium of Youth Clubs, this is a bleak statistic. Later in the night, Top Boy’s Jerry Jackson calls emphatically to ‘put back the youth services’, linking their disappearance directly with knife crime. Since 2010, offences involving a knife or sharp implement have risen by 35.7% in line with the cuts.

M.I.A. continues with her potted history. The youth clubs kept her engaged in school until she could make the leap to higher education. Again, the government stepped in: she attended university with the help of bursaries and grants. ‘It’s the government funding that put me into St. Martin’s’, she says. From there, she launched her career as a visual artist before becoming a musician in 2002. Dressed in a sparkling, floor-length golden robe, she jokes that she’s dressed like an ‘elitist’, before striking a more serious note. December’s election, she says, is ‘almost like the last stand that England has got’.

Jamelia also describes the important role music has played in her life. Born when her mother was just seventeen, Jamelia was not taken home for the first six weeks of her life because her mum couldn’t couldn’t afford the electricity bill. And look where she is now: ‘I’ve performed on every continent. I’ve performed for royalty’. She tells us that last Thursday, for the first time in her life, she registered to vote. ‘Greatness can come from anywhere,’ she says firmly. ‘Great things can come from anywhere’.

This evening, these mythic immensities take on the aspect of normal people once again, normal people who have been skint, who know what it is to struggle. I am dizzied by the breathtaking precarity of their climb to fame. For a moment I catch the faintest glimpse of a reality that could have been, an alternate universe brushing up threateningly against our own. In this alternate world, these artists, performers and writers never got the funding they needed to get their projects off the ground, and never made it.

And that makes me wonder how many artists have been lost to the great sucking void of poverty in the last ten years. In a world with a woefully small stock of council homes and soaring rents, pursuing a career in the arts is no small feat. City centres have become the preserve of the super rich. Young people and artists are pushed out of the places that were once affordable. The cost of rent and food and travel layer up like brick upon brick to build an insurmountable wall over which few people could ever hope to climb without help. Funding for the arts acts as a ladder or vaulting pole, a leg up over this solid wall for those who need it most.

And suddenly the whole theatre feels haunted. Haunted by the almost-writers, artists, filmmakers, actors, theatre directors, and musicians. How many books have gone unwritten, art unfinished, films unmade, roles unplayed, plays unproduced and music unsung? How many young people are out there in the world right now, who, with the right funding and support, could have been up there on that stage too?