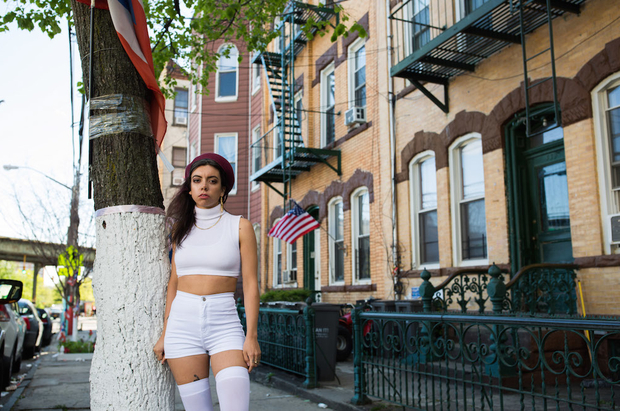 Daniel Jacobson reviews The Navigator, the latest album from folk/blues band Hurray for the Riff Raff.

I had the opportunity to speak to Alynda Lee Segarra, lead singer of Hurray for The Riff Raff, at their intimate show at Rough Trade East on Brick Lane. She was smiley, and grateful for all those who were present, and seemed slightly embarrassed by the universal acclaim The Navigator has received. I found this unexpected, given that she has just released what Uncut described as ‘the first important album of 2017’.

Segarra, a Puerto Rican woman raised in the Bronx, left New York at 17, eventually finding herself in New Orleans, where she quickly became a staple of the folk music scene. However, not feeling entirely at home amidst the whitewashed region, she returned to her Nuyorican community for The Navigator. As a result, she has written not only one of the most entertaining, colourful, engaging records of the year so far, but the most socially potent album since Kendrick Lamar’s To Pimp A Butterfly.

Up until 2017, Hurray for The Riff Raff were a band heavily influenced by their folk-blues and Americana, hesitant to branch out musically. This seems to have posed a problem for a genre whose growth and development has been stunted by its undying obsession with nostalgia. Segarra was known in the folk community for her protest music, particularly prevalent in her 2014 murder ballad ‘The Body Electric’. She sings: ‘Oh, and tell me, what’s a man with a rifle in his hand/Gonna do for a world that’s so sick and sad’, a line that not only calls into question the United States’ poisonous attitude to gun control, but also masculine violence towards women and minorities. With the world in the state that it was by the end of 2016, Segarra’s lyrics were pertinent and brave.

The Navigator is a concept album: it follows a homeless Puerto Rican child named Navita Milagros Negron, presented as ‘The Navigator’ by Segarra, who, having become disillusioned by her life in the city in the first Act of the record, decides to flee. It isn’t hard to discern the autobiographical basis here, yet the lack of subtlety does not undermine its poignancy. This is posed most effectively in second track ‘Living In The City’. The opening lines ‘Well I’ve got her cane/Oh and Big Danny is wasted/He said I’m the sweetest thing/You know that he’s never tasted’, and phrases like ‘Gypsy bit the dust/You know the shitty hat – it was poisoned’ reflect the casual harassment and unhealthy environment that Navi has found herself in, which fuels the remainder of Act I.

This section of the album, connecting the dots between Navi’s disillusionment and her departure from the city, is held tight by its common themes, yet it is Segarra’s versatility that makes it special. ‘Hungry Ghost’ certainly the most rousing track, a hair-raising song that sees Navi express the loneliness within her community (‘I’ve been nobody’s child/So my blood’s started running wild’) in a thrilling way. Contrastingly, the song ‘Nothing’s Gonna Change That Girl’, is more laid back and ethereal, filled with slow, strumming acoustic guitars and string backing. This is followed by the title track, which seems to represent Navi’s departure. In the song’s outro, Segarra sings ‘Oh where will all my people go? The navigator wants to know’, as she, piper-like, leads her followers out of the city which has caused her so much suffering.

It is in Act II, however, where things take a turn for the worse. It opens with ‘Rican Beach’, which describes the scene which Navi returns to: a city gentrified and militarised beyond recognition. She sings with an anger and vigour that wasn’t required in Act I: ‘Now all the politicians they just squawk their mouths/Said we’ll build a wall to keep them out/And all the poets were dying of a silence disease/So it happened quickly and with much ease’. This track provides most prevalent example of Segarra departing from her old folk-root sound; she experiments with Latin American hand percussion and broken electric guitars, re-embracing the community she left – and warns us what will happen to ‘community’ if we continue as we are.

The song which has caused the most conversation is the penultimate song ‘Pa’lante’, the name of a newspaper published by the activist group Young Lords in the 1970s, which translates as ‘onwards, forwards’. It opens as a stirring piano ballad, but, with the aid of a jaunty 8-bar and a sample of Pedro Pietri’s 1969 poem ‘Puerto Rican Obituary’ (‘Dead Puerto Ricans/Who never knew they were Puerto Ricans/Who never took a coffee break from the ten commandments/To KILL KILL KILL/The landlords of their cracked skulls’) it grows into a stirring, rousing, call-to-arms. Segarra passionately sings: ‘To all who had to hide, I say, Pa’lante!/To all who lost their pride, I say, Pa’lante!’. This song is to Segarra what ‘Alright’ was to Kendrick Lamar, or ‘Smells Like Teen Spirit’ was to Nirvana – a song that has the potential to inspire a disenfranchised community to rise and reclaim their identity.

I asked Segarra if she intended this album to be as relevant as it is, which she denied with a chuckle. How could she? Almost all the songs, including the most politically charged cuts, were written long before Trump’s inauguration. The Navigator is truly a protest album of its time – but no great protest album sets out to achieve this; it relies on a level of foresight displayed only by the likes of Black Mirror or Radiohead’s OK Computer. Yet, amongst the Latin American vibes and the directness of her lyrics, Segarra has created something which is, in equal parts, seductively engaging and painfully relevant. If there is any record that can lead us through the next four years, I believe you would be hard-pressed to find a better one.