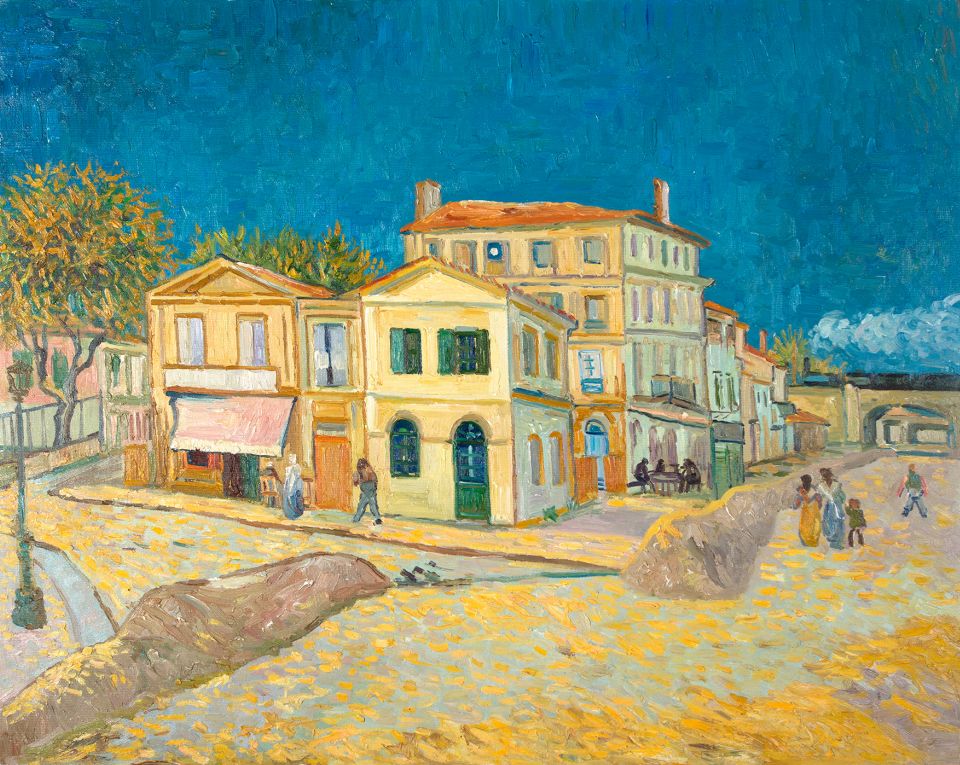 ZOE LEWIS considers the music of Yellow House and the rejuvenation of folk in present.

The above image is one of Van Gogh’s lesser-known works, The Yellow House, painted in 1888 in Alés, Southern France. The setting evokes a sense of reassurance; the small figures, perspective and impressionist brushwork of the painting remind the viewer of an imposing world that surrounds us. When describing his work, Emile van Dango, a South African musician known as Yellow House, often refers to this painting, using it as the cover for his first EP, A Carnival of Fears (2017). Originally a folk artist, his experimentation has set the genre on a new trajectory. It now works as a perfect canvas for introspection: a dedicated safe space that reassures the listener but also touches on ideas of chaos and post-modern gloom.

An artist of the ‘contrasting psychesoul picture’, as described by Arnaud Marty, much of Yellow House’s music plays with juxtapositions of comfort and disturbingly truthful insights into the human psyche, stemming from his own feelings about spaces of comfort and discomfort. Yellow House feels best when he is away from the city, since, as he describes,  ‘the infinite, manic drone of humanity seems heady enough to devour the sensitised soul’.

With lyricism bound in isolation and introspection, Yellow House’s deliberations on the demons that have haunted him in his life are almost always counterposed by a lesson on self-realisation or a symbolism of brightness and light. His major releases, EPs A Carnival of Fears (2017), Sermon on Desire (2018) and album Mania / Post Mania (2020) demonstrate the development of Yellow House as an artist.

A Carnival of Fears seems an ode to those who are lost but find an anchor in love. Nowhere is this more poignant than the track, ‘Love in the Time of Socialism’. The narrator deliberates on what he could have been, questioning, ‘maybe I was destined for philosophy / Leading leftist ideologies / At the Paris-Sorbonne’. Or, he is perhaps better suited as an ‘an artist’s muse in London’. He is grounded by his love: ‘as long as I’m with you when we do it / I could trade the views in for any pallet’. In a later track, ‘Sermon on Desire’, Yellow House continues to conceptualise lostness against love, that among the loneliness and the search for another, we find ourselves distracted. Yellow House delivers a breathy self-realisation: ‘I guess that’s what I get / For dreaming / So much of my life / Spent thinking about somebody / Or another’.

In Mania / Post Mania, Yellow House communicates the importance of reflection. The symbolism of struggle seems overwhelming in ‘It Feels The Same Everyday’: ‘Oh gruelling undertow / Spit me out any place you know’. In ‘Better Views,’ the persistent line, ‘you’re testing me’, is contrasted with a more confident tone, as he proposes to ‘rip off the veil / Of this hellish tale’. Couched amongst the dreamy, ethereal instrumentalism of ‘It Feels the Same Everyday’, Yellow House questions, ‘who are you to turn your face away / from the darker days?’ Through his lyricism, Yellow House finds courage amidst the mania: his self-reflection becomes self-assurance.

Mania / Post Mania embraces the light and dark of the psycho-soul, the artist explaining that it was ‘written in the old style of A&B records’, aiming to ‘juxtapose the two hemispheres that exist within the psyche’. The album cover is also suggestive of such juxtaposition, as are the chord choices. The ‘A’ side (‘Mania’) is minor chord driven,  creating a heady atmosphere, accompanied by ‘themes of hedonism, romantic disintegration and the consequential loss of self’. The ‘B’ side (‘Post Mania’) is designed to combat the frenetic chaos and make sense of such fragmentation elicited by the former. This, contrastingly, accompanies lyrical themes of finding a new sense of self. Yellow House is bold enough to criticise the ‘human desire to fight for control in every aspect of our lives’ in one of his first singles, ‘Control’. His lyricism reflects an individual who finds nothing in darkness, shrouded in desperation to hold onto the light. He asks his lover, ‘Wanna leave tonight?’, informing the listener that to ‘Leave before the light / Can offer us a bit of life’.

The final track, ‘I Know It Well’, focuses on Yellow House’s struggle to ‘find the line between reality and the impending fear of make believe’. The oxymoronic line, ‘an oasis in the hells of my days’, shows his awareness of the ‘manic’ and ‘post manic’ hemispheres of the human psyche, yet allows them to interact. It is possible to find the light: in ‘I Can’t Get Through to You,’ in which the ‘comfort of sex seems to be the only escape available’ to him. Notions of sensuousness continue in what seems to him an avenue of escape. The feeling he gets ‘seems reason enough to begin again. Highlighting themes of new beginnings offers comfort and reassurance to the listener, even if the hope is dim.

The album also seems a more definite return to Yellow House’s folk origins. His use of familiar instrumentation evokes comparison to other artists also pursuing modern folk projects, such as The Walters, Mellow Fellow, and Summer Salt. Yellow House joins these guiding figures in the re-popularisation of folk music, creating a safe space to think about melancholy and loneliness.

Yellow House’s lyrics are uniquely beautiful in his reconciliation of the paradigms of light and dark. His work seems a renewed, Post-Nick-Drake-ian appreciation for 1970s folk. Drake’s work was underappreciated in his time, but his resurgence is testament to the important place of folk music as a genre today. Drake’s eponymous Pink Moon (2007) is a relentless reflection of the unfamiliar power of nature: ‘Pink moon gonna get ye all’ whilst ‘none of you stand so tall’. The characterisation of himself as ‘the parasite of this town’ in ‘Parasite’ is juxtaposed by his hopeful surroundings: ‘dancing a jig in a church with chimes’ and ‘watching the shine of the shoes’. This lyricism of introspection is at once harrowing when considering his struggles mentally, but the familiarity of instrumentation, like Yellow House, offers a space for this.

Yellow House, his contemporaries, and his inspirations all pay homage to the contrast of light and dark amongst a backdrop of familiarity. It has meant folk music has enjoyed a rejuvenated tone and popularity in times where introspection seems the only activity available to us. I love his work and can’t wait to see what he does next.