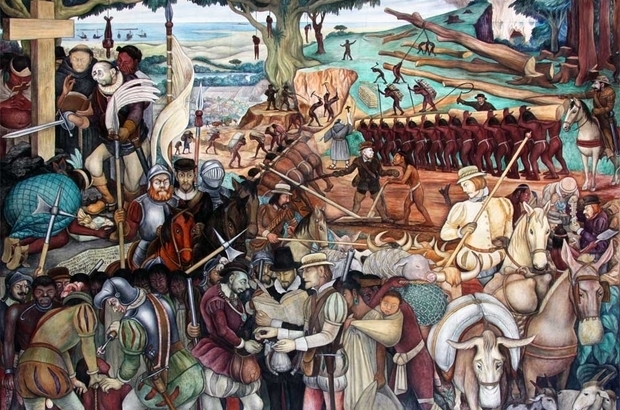 ‘The poet put all the force he could into the serve. The ball hit the roof of the gallery. The artist waited for the rebound.’

A game of sixteenth century ‘real tennis’ between the Italian artist, Caravaggio, and the Spanish poet, Quevedo, is an unlikely choice for the framing narrative of a modern novel. In Álvaro Enrique’s Sudden Death, the players themselves are not entirely sure why they are there. We are told that Caravaggio was a ‘great lover of the game’, but his fictional counterpart is too hungover to remember why he is volleying balls for an audience of men who are armed to the hilt. Quevedo’s memory and body are equally afflicted by the previous night’s drunken merriment.

Sudden Death is the first of Enrigue’s novels to be published in English, thanks to Natasha Wimmer, whose translations include the writing of fellow Mexican, Robert Bolaño. As with Bolaño, the English-speaking world has been slow to recognise the genius of Álvaro Enrique. Combining sixteenth century essays on tennis with Enrique’s own private emails, Sudden Death’s originality and innovation belies its author’s claim that he is ‘a conservative writer’.

Enrique shepherds large, seemingly disparate ideas into a beautiful and reflective work. Moving from the surreal tennis game to the almost too real history of his homeland of Mexico, the author recounts the conquest of the Spanish conquistador, Hernán Cortés.  Much like the tennis players, Cortés is ‘in over his head’. Loutish, uncouth, and dim, when Cortés sets up camp in Mexico it is clear to everyone that he has no clue what he is doing. What follows is the annihilation of the Mexica’s and the Aztec empire. Enrique asserts that,

there are few better illustrations of how a whole host of people can manage to understand absolutely nothing, act in an impulsive and idiotic way, and still drastically change the course of history.

Much has been made of the novel as a search for Mexico’s identity. In the story of Cortés, famous figures are addressed by the various names history has bestowed upon them. The conquistador’s infamous Aztec translator, and later mother to his son, is referred to as ‘Malinalli, princess-whore’, ‘Malitzin, mouthpiece of soldiers and politicians’, ‘Dona Marina, mother of the conquistador’s children’, and finally ‘Malinche, the bitch who vanished from history after having delivered America to the Europeans’. Each new name adds to the creation of a cultural history and moves the narrative towards identifying what it means to be Mexican, however the answer remains elusive and personal; ‘I don’t know why name changes are significant in Mexico,’ Enrigue admits, ‘the reader may know better’.

Sudden Death is also a search for European cultural identity in the aftermath of colonialism. Enrigue’s account of the conquest of South America exists within a history of Europe during the counter-reformation. The novel’s structure demands that the two histories are read not one after the other but as interwoven and inseparable. Enrique reimagines Caravaggio’s technique of ‘chiaroscuro’, the juxtaposition of light and dark for which he is famous and which shaped European art, as inspired by a feathered mitre from Mexico, whose ‘colours have an intensity simply unimaginable to the European eyes of the time’. The novel suggests that it is only by coming to terms with Europe’s colonial past, the treasures pillaged from the rest of the world, that we will truly understand even our most beautiful achievements.

The geographical and topical shifts in Sudden Death make for a novel that is almost impossible to describe. For Enrique, ‘the function of the novel is to name what is lost, to replace the void with an imaginary archive’. The archive imagined by Álvaro Enrique is vast. And yet, as he bounces between his many subjects, it strikes me that what might have become hard fact with a lesser author attains a delicacy and lightness under Enrique’s handling. For all its research and deep engagement with human history, Sudden Death remains playful and constantly insightful. Perhaps more than anything, Enrigue reminds us that the journey to our troubling present is not a long judicious arc, but a ball in a game of tennis in which no one is quite sure why they are there. Hit back and forth by idiots, the ball signifies nothing and means everything.