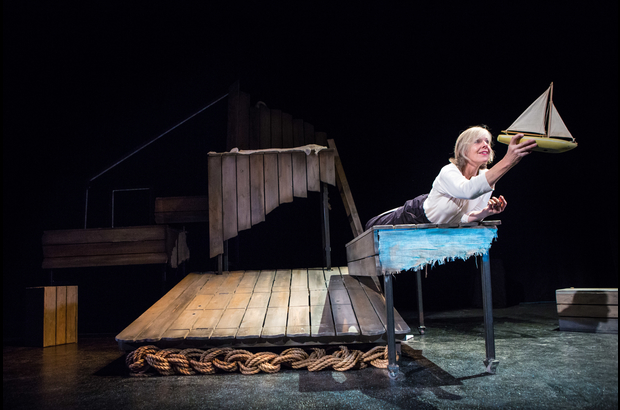 AMY READE reviews Why the Whales Came at The Oval House.

Michael Morpurgo’s genius is in writing stories that tackle the atrocities of war through a child’s world. He brings his readers in through a realm of existence that they understand and educates without being either patronising or overly complicated.

Danyah Miller’s one-woman rendition of Why the Whales Came follows the intrigue and curiosity of two best friends, Gracie and Daniel. The two 10 year olds are forbidden to go near Bryher Island where the Birdman lives. Yet, after washing up on his shore in a storm, a friendship emerges that slowly assuages their fears, fears which fuel anger and superstition in their society. In the context of the First World War, the children’s games subtly parallel wider contemporary society and its concerns: anxieties over territory and borders, a fear of the unknown, and the necessity of kindness. At times both worlds seem distinct, yet sometimes the children’s and adults’ worlds collide brilliantly. Dani Parr and Miller’s adaptation maintains a style that plants the seed of intrigue in its audience’s mind, rather than bashing the point home, or shying away from complex issues as is common in children’s stories.

Miller’s performance takes place on Kate Bunce’s lively set, reminiscent of a wooden ship in a children’s playground. Throughout the show it reveals itself, much to the delight of a mesmerised audience, to be a treasure trove. Carved wooden birds emerge from trapdoors, secret messages appear and parts of the set are used as a backdrop for projection. Bunce creates a beautifully-detailed, playful aesthetic that lends itself perfectly to the children’s excited curiosity in their exploration of their surroundings.

Although the set is well negotiated by Miller, its intricacies do occassionally distract from the sheer magic that Miller achieves when simply using her own physicality to tell the story: while a phone being used to simultaneously film and project a miniaturised boat sequence in a pool of water is technically impressive, the most poignant moment is when Miller embodies Gracie and conjures a whale on stage using only her physicality to inspire our imaginations. Miller also beautifully incorporates sign language as another communicative element of her performance, enhancing narrative descriptions. Younger audience members seemed most engaged when their imaginations were being challenged and they were held captivated by the brilliant pace of performance, within the 60 minute run time.

The storytelling style is a delight and the moments when Miller transitions from the narrator into the different characters are seamless. The exchanges between the Birdman and Daniel are particularly captivating as we see Miller project both characters simultaneously and vividly. Journeying further into the show we saw more of these beautifully rendered characters and moved away from the sometimes-patronizing narrator figure. The narrative maintained an engaging level of challenge throughout, although the tone of voice adopted by Miller occasionally slipped into a condescending tone of voice, forgetting the integrity of its audience of children–as we are shown at the end of the play, it is the children’s intellect that saves everyone from destruction. Nonetheless, Why the Whales Came is pitched very well for a young audience and maintains a certain sophistication–a tricky balance to be struck in making children’s theatre. They should have more faith that the wonderfully precise language of Why the Whales Came, and the physical dexterity of Miller’s performance are coherent and beautifully composed enough to be completely accessible.

Why the Whales Came is a visual joy. The layered complexity of the narrative means it is a story to be enjoyed by all ages. Fundamentally it is a tale of friendship and at the end all shines clearly through the eyes of two children who have an untainted view of justice.

Wizard Presents’s Why the Whales Came ran at the Ovalhouse 22nd – 31st December, and will perform again at the Lyric Hammersmith 28th January. For more information and tickets see here.