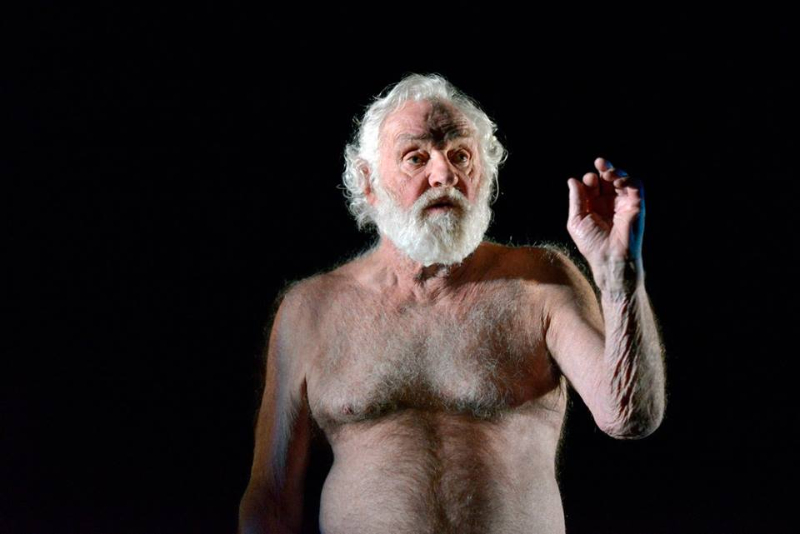 ‘It comes at you suddenly, doesn’t it?’ Death that is, though the character could easily be describing Caryl Churchill’s new play. In a nifty forty minutes Here We Go goes to the afterlife and back again. The succinctness of the play, though, is not for lack of material; rather, it constitutes a critique of the way in which we hurry unthinkingly through our short lives, and where death, as a part of everyday discourse, is treated with flippancy. Forty minutes: in, out, ‘what time does the bar close?’, done.

But someone’s died. An elderly man, played by Patrick Godfrey, killed by a Tube train, or possibly by old age – nothing is certain. In the play’s standout scene, he delivers a monologue from beyond the grave, standing haggard and half-naked in an unsettling but not altogether humourless recreation of Munch’s ‘Scream’. He tries to relate what he sees in front of him. Churchill’s play, though, has a tendency to mystify rather than elucidate and we struggle to get a handle: is he in hell? heaven? purgatory? All of the above? Churchill’s afterlife is a cocktail of ancient myth and modern religion: the Pearly gates stand alongside the Egyptian and the Nordic Gods, who ‘sit round the table drunk’.

It’s typical of Churchill to emphasise our place within the natural world, minimising our lives to the recycling of atoms with all the zeal of a school science teacher. Godfrey disappears in a puff of smoke, mid-sentence: food for worms. More uncharacteristic of Churchill, though, is the relative naturalism (a trip to the afterlife aside) of Here We Go. It marks something of a departure from the mythical quality of her epic post-apocalyptic plays, like The Skriker or Far Away, where the world is spinning into chaos. The one life imperiled here is that of a elderly, sick man; important, yes, but in the grand scheme of things, with a world on the edge of war and ecological disaster, one life ‘is a speck of sand in a desert’.

The triptych of scenes in Here We Go set out to reconstruct the life of this man. At his funeral party his story becomes clearer, nuggets of information sieved from an endless stream of small talk: he was a thrice married, red flag-waving man accompanied into old age by his ginger cat. Perhaps more than any other playwright, Churchill has an ear for the natural rhythms that typify everyday language: the ums and ers of the party guests, the euphemisms and false-starts, the half-finished sentences that trail away into mournful silence. The guests’ chatter is more platitude than pith, making the ceremony feel a mere matter of routine – not least when (we’ve all been there) they start comparing this funeral to others they’ve been to.

Eleanor Matsuura, Joshua James, and Susan Engel stand out, but Churchill’s focus is the bigger picture: a tapestry of bored guests, meandering in and out of the doors of Vicki Mortimer’s expressionless set. They walk off, do a 360, return, nattering all the while. The play’s title is a red herring; Churchill’s characters, like their conversation, go nowhere. It’s not as if Godfrey’s up to much either. In the third scene, before his death, he changes clothes and hobbles with painful difficulty from his bed to his armchair, helped by his carer. The scene repeats like a broken record – and not a word is uttered for, according to Churchill’s script, ‘as long as the scene lasts’. It ends up feeling like a very, very long time.

In fact, the silence and repetition are protracted to the point of exasperation, interrupted only (at least on the night I went) by the noise of seats being abandoned. Dressed and undressed, dressed and undressed; our compassion slides and our impatience grows as the play eludes a conclusion. Let’s be frank though: the conclusion for this sick and elderly man is death. So his continued act of living – and it’s a monotonous life at best – oh-so selfishly prevents the house lights from going up. The play would be over a lot quicker if he just gave up the ghost. Daringly, provocatively, radically, Churchill implicates us in the death of the old man. The offence: our own impatience.

Fifteen minutes later we file out. Someone’s died, there’s blood on our hands – but at least we don’t miss the next Tube.

Here We Go is running until 19th December. For more information and to book tickets go to http://www.nationaltheatre.org.uk/shows/here-we-go.