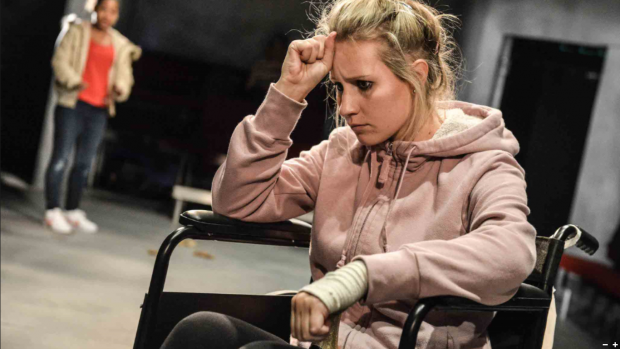 Descend into the bowels of Trafalgar Studios and enter one of London’s most intimate theatres, Studio 2. You might almost imagine that the doorway is inscribed ‘abandon all personal space, ye who enter here’.  You share a slab of folding seat with another theatre-goer and from this vantage point can see into the whites of spectators’ eyes as the stage is à la ronde. This is the setting for Phil Davies’ powerful debut play, Firebird, which responds to the child sexual exploitation scandal in Rochdale, the playwright’s hometown. A production of firsts – being Callie Cooke’s professional debut in the lead role of Tia – it is also the first time that I’ve left a theatre feeling as shaken as when I drove my clapped-out Ford KA headlong into a lorry.

Firebird pulls no punches. The play graphically presents the seduction abuse and ‘escape’ of fourteen-year-old Tia (Cooke) by the shiny-suited, Mercedes-driving, designer-cigarette-smoking AJ (Phaldut Sharma). The innovative use of space in this production sees the whole theatre become a fast food restaurant which is the hub of AJ’s sex ring. A neon ‘KEBAB’ sign hangs above the audience, the smell of AJ’s cigarette lingers in the confined room, and you feel yourself involved; just another customer chowing down on a box of chips after a night out. This immersiveness becomes almost unbearable as a blackout, undercut by club music and screams, transports you to the locked room in which AJ and his unseen cohort hold Tia prisoner. Half-naked and smeared with blood, Tia (Cooke) is spat on, thrown around the stage and force fed vodka; all the while you, the spectator, are sat within touching distance and the conventions of the theatre tell you to stay put. Tia’s screamed accusation that ‘You’re all fucking bastards!’ reverberates through an audience who have watched the abuse take place and have done nothing. Expect to see a unanimous avoidance of eye contact.

Callie Cooke gives a virtuoso performance, able to be both emotional powerhouse and approach with a light touch the portrayal of a child whose trust and innocence have been shattered. Fresh from The Arts Educational School this actor is undoubtedly one to watch. Tahirah Sharif as Katie brings much-needed comedy to the play through her exchanges with Cooke, which take the form of an enviable calibre of banter for which the playwright should be praised, and also thanked. Were it not for this allowance of laughter, the 100 minutes in Studio 2 would feel like an ordeal. Casting Sharma as both perpetrator and policeman creates a neat parallel between the two as figurations of the dominating male. Coupled with AJ’s pretence of being a youth worker, Firebird points (as subtly as if with its own flashing neon sign) to the systemic failures that leave young people vulnerable.

It is clear to see why Firebird has been recognised by national charity, The Children’s Society, as a tool for raising awareness about child sexual exploitation. This run at Trafalgar Studios gains poignancy in coinciding with a debate in Parliament on The Policing and Criminal Justice Bill; legislation that could provide victims and those at risk of exploitation with greater protection. The craftsmanship of Firebird is clever but it seems terrorised by the social issue it addresses, just as the audience is terrorised by Firebird itself. I look forward to seeing more plays from Phil Davies but hope, rather unusually, that they might be less persuasive.