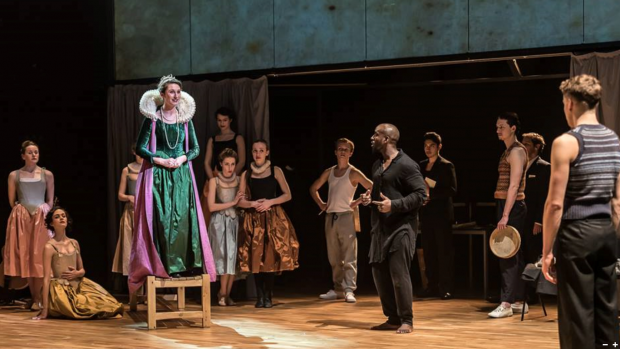 2016 marks the 400th anniversary of the death of William Shakespeare, and who better to throw a dramatic death-day party than renowned director, author, voice coach and Shakespearean scholar, Patsy Rodenburg, OBE? Joining forces with the Guildhall School of Music & Drama, where Rodenburg is Head of Voice, Go, make you ready has all the hallmarks of a production not to be missed.

It has recently become a popular mode of biography to amalgamate an artist’s life and their work; almost to fictionalise the artist within his or her oeuvre, a trend exemplified by Tom Stoppard and Marc Norman’s Shakespeare in Love. Devised by Rodenburg, Go, make you ready also takes its audience into Shakespeare’s rehearsal space and home. Overseen by the playwright (Akpore Uzoh) and his wife Anne Hathaway (Bessie Carter), rehearsing players interweave Shakespeare’s sonnets with episodes from his plays in order to build an impression of the artist’s relationship with his wife. Confessedly fascinated by the marriage, Rodenburg remarks: ‘No other writer in Shakespeare’s time – or perhaps no male writer in any time – produced so many magnificent women. Where did he hear the voice of that magnificent woman? His inspirations are always real so I conclude it must have been Anne.’

When a female director takes advantage of ‘Shakespeare400’ to shine the spotlight on Anne Hathaway, using a gender-balanced cast whose female actors happily turn their skirts into breeches, there is a real sense of dissolving gender barriers and celebrating the power of women in Shakespeare’s art. Bessie Carter as Anne is superb, with crystal clear diction and wonderful presence; arguably outshining Shakespeare (Uzoh) himself. The costumes are both Elizabethan and contemporary, with bizarre combinations such as corset-plus-tracksuit-bottom serving as a humorous reminder of the universality and endurance of Shakespeare’s work, and highlights the evolution of our appreciation of the playwright through time.

Go, make you ready has the premise and artistic touches that excite today’s theatre-goer, however its realisation is more problematic than its conception. To evoke Anne as a collage of Shakespeare’s female creations has the effect of throwing her more under the playwright’s shadow rather than less; suddenly Shakespeare is not only Anne’s famous husband but also her creator. And if not her creator he is the interlocutor through whom Rodenburg has her speak. The implication that the speeches of scorned women in Shakespeare’s oeuvre represent Anne’s reaction to the publication of Shakespeare’s sonnets, most of which are not written to her, is also an odd conclusion to draw. It is odd not just because the plays largely preceded the sonnets but also because of the strong suggestion in them that Shakespeare was not so much promiscuous with other women but was gay; a suggestion that Rodenburg entirely overlooks.

The sonnets historically have received far less attention than Shakespeare’s plays and Go, make you ready is clever to recognise the poems as a springboard into exploring the playwright’s position on relationships. Expertly interweaving sonnets with episodes from plays creates a dynamic development of specific themes and ideas. What it does not create is a play that is approachable for anyone who isn’t an expert on Shakespeare. This whistle stop tour of some of the writer’s greatest linguistic moments abstracts episodes from their contextual and emotional foundations and thereby reduces them; making this production less than the sum of its parts. This is in no way the fault of the actors, who are unanimously strong and tackle the breadth of material and characterisation with flair. But rather just as Roland Barthes criticises a mode of reading which seeks to find the author and in so doing ‘explain’ the text, it feels unhelpful to cut and paste Shakespeare’s oeuvre into a vision of Anne. I left with a niggling regret that Rodenburg had not simply staged a full play.

‘Go, make you ready’ was presented by the Guildhall School of Music and Drama as part of Shakespeare400 at the Silk Street Theatre. This production will tour China in April. For more information visit http://www.barbican.org.uk/theatre/event-detail.asp?ID=18933