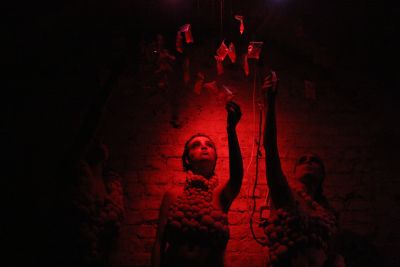 Sarah Kane’s body of work is brief—only six major plays—but each contains a voice that must be listened to. Accusing, interrogating and confronting their audiences, her plays are by no means easy to watch. Even for the best directors and visionaries, Kane’s work is fiendishly difficult to stage because of their highly abstract nature; how exactly do you visualize mental disorder when it occurs in the most impenetrable internal spaces?

Collide Theatre’s staging of her last and darkest play, ‘4.48 Psychosis’, succeeds in making you uncomfortable in just about every way possible, such as only great theatre can. The highlight of the production is its clever set design. Squishy pink and purple pillow-like objects hang from the ceiling near the entrance of the crypt, simulating intestinal tracts. They’re clustered close together so that descending into the cold black pit is a claustrophobic nightmare. Alcoves in the St Pancras crypt are lined with bubble wrap and sterile translucent sheets, while the actors are shrouded in pink cloth like unborn babes in a womb. Pulsating eerie sounds are emitted from unseen corners and strobe lights flicker intermittently, providing just enough lighting to move easily through the promenade performance. With Charlotte Barbour providing haunting violin sounds that strike the nerves, all of these sensory elements come together to create an atmospheric experience of a darkening mind imploding from the corners.

The challenge for anyone attempting to stage a Sarah Kane play is to make sense of the abstract, fragmented text. ‘4.48 Psychosis’ is ostensibly a narrative of a woman’s experience of depression and, with no directions of any kind, interpreting it can be difficult. Yet Director Emily Louizou navigates it effortlessly, pulling out the threads of narrative where they emerge. In her careful hands we watch as various personas emerge and fade away in a single mind, echoing or contradicting each other, sometimes becomes violent or self-destructive. We take a front row seat to watch a woman’s schizophrenic breakdown, brought to life via poetic text and dancing. The cast work incredibly well together, so much so that it is often difficult to distinguish between them. They build on each other’s performances, reminiscent of a Greek dramatic chorus, but also create nuanced, distinct characters. That they often melt back into each other, compounding the tragedy of Kane’s narrative voice: an individual torn apart.

‘4.48 Psychosis’ is a challenging bit of theatre, and is not a play you can enjoy without some exertion. This production in particular strides a fine line between nightmare and fracturing reality. Louizou makes it a palatable piece of drama, yet she doesn’t duck away from the questions posed by the text, nor from presenting a real experience of depression and schizophrenia. The play’s personas are asked to question the realness of their mental disorders, further fragmenting their sense of their own selves. They are bodies and minds interrupted and intruded upon by others’ realities—by the curious audience who descend into the crypt of a dying mind. Kane’s play-text and Collide Theatre’s production insist that we bear witness to it all: writhing figures and bumptious surfaces, arguments between doctors, the disbelief of loved ones, and the gradual implosion of one woman’s psyche.

Collide Theatre’s production of ‘4.48 Psychosis’ initially ran on the 8th-9th of July 2015 at St Pancras Old Church Crypt. The performance will run again on the 7th-10th of October 2015 at the Crypt Gallery, Euston. Book tickets here (http://448collide.eventbrite.co.uk_) or for more information visit (https://collidetheatre.wordpress.com/.)