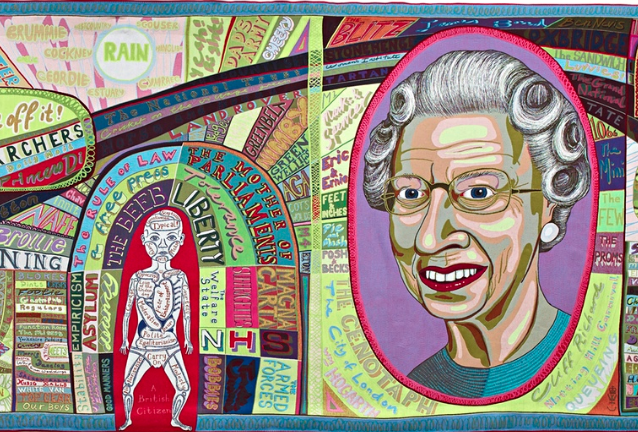 Turner Prize-winning artist Grayson Perry ‘turns his attention to portraiture and British identity’ in his latest exhibition, ‘Who are You?’, displayed at the National Portrait Gallery until 15th March. I am a fan of Perry, but I must confess that when I read this description on the gallery’s website I had my reservations. It could have been falsely celebratory, at a time when I think the majority of us would agree there isn’t much to celebrate. It could have been overbearingly twee, when you can’t currently venture outside in this country without being confronted by several hundred adulterated versions of the ‘Keep Calm and Carry On’ poster, a Union Flag leitmotif and countless Cath Kidston print tote bags. But ‘Who are You?’ is neither of those things; it doesn’t just try to celebrate Britain, but offers a truthful and honest depiction of our country, its triumphs and its flaws.

The exhibition begins almost before you know it, right next to the information desk, with a self-portrait called ‘A Map of Days’. It looks like the kind of map etching found in ‘The Pilgrim’s Progress’—which also inspired Perry’s 2011 exhibition ‘The Tomb of the Unknown Craftsman’—and details Perry’s journey towards his current identity, depicted as a walled city surrounded by the emotions and events that have shaped him. It’s an interesting take on a self-portrait, particularly since the centre, labeled ‘A Sense of Self’, is left empty. Perry’s point, perhaps, is that it is our experiences and surroundings that shape our identity, rather than anything internal. This is a theme carried through to the next piece ‘Comfort Blanket’, a huge, vibrant tapestry with a portrait of the Queen as its focal point, surrounded by the names of various building blocks of British culture, from bubble and squeak to the Magna Carta.

The rest of the pieces are scattered throughout the gallery, so that you inevitably find yourself drawn not only to the portraits done by Perry, but also to various works in the gallery’s permanent collection. Besides introducing a childlike element of hide-and-seek fun to the exhibition, it’s a clever way to draw comparisons between historic and contemporary ideas of British identity. A portrait of X Factor contestant and Celebrity Big Brother winner Rylan Clark, done as an Elizabethan style miniature entitled ‘The Earl of Essex’, is placed in a room of genuine miniatures of Elizabethan nobility to draw comparison between our past and current ideas of celebrity, while ‘The Line of Departure’, an Afghan rug depicting three wounded Afghanistan veterans, is mounted alongside portraits of Lord Kitchener and Florence Nightingale.

It’s very clever, but contrary to the opinion of the woman I overheard, who declared in the plumiest of voices that she ‘hates intellectual art’, one of the triumphs of ‘Who are You?’ is its accessibility. This feels hugely important to a project that takes on such a vast and inclusive subject as ‘British identity’. For one thing, the exhibition is free and non-ticketed, a rarity for an artist of Perry’s status, making it no doubt infinitely more accessible than most special exhibitions at the Portrait Gallery.

Furthermore, Perry shot a three part series for Channel 4, documenting the creation of the exhibition from the interviews with his subjects to the installation of the portrait. As well as this, each piece is accompanied by an account of his artistic decisions. Perry explains, for example, the ‘The Huhne Vase’, a portrait of the disgraced politician Chris Huhne, was smashed and expertly restored, with the cracks covered in gold leaf, to symbolise Huhne’s embodiment of the white male’s seemingly infallible self-assurance.

From the number of young children engaged by the bright tapestries and the incredibly diverse crowds surrounding each piece, it seems to me that part of the brilliance of this exhibition is that its audience is just as representative of modern Britain as Perry’s works. Grayson Perry is a national treasure, and it is a delight to see the portrait of him in the last room of the exhibition, commemorated alongside his own portraits.

‘Who are You?’ is at The National Portrait Gallery until 15th March 2015, click HERE for more details