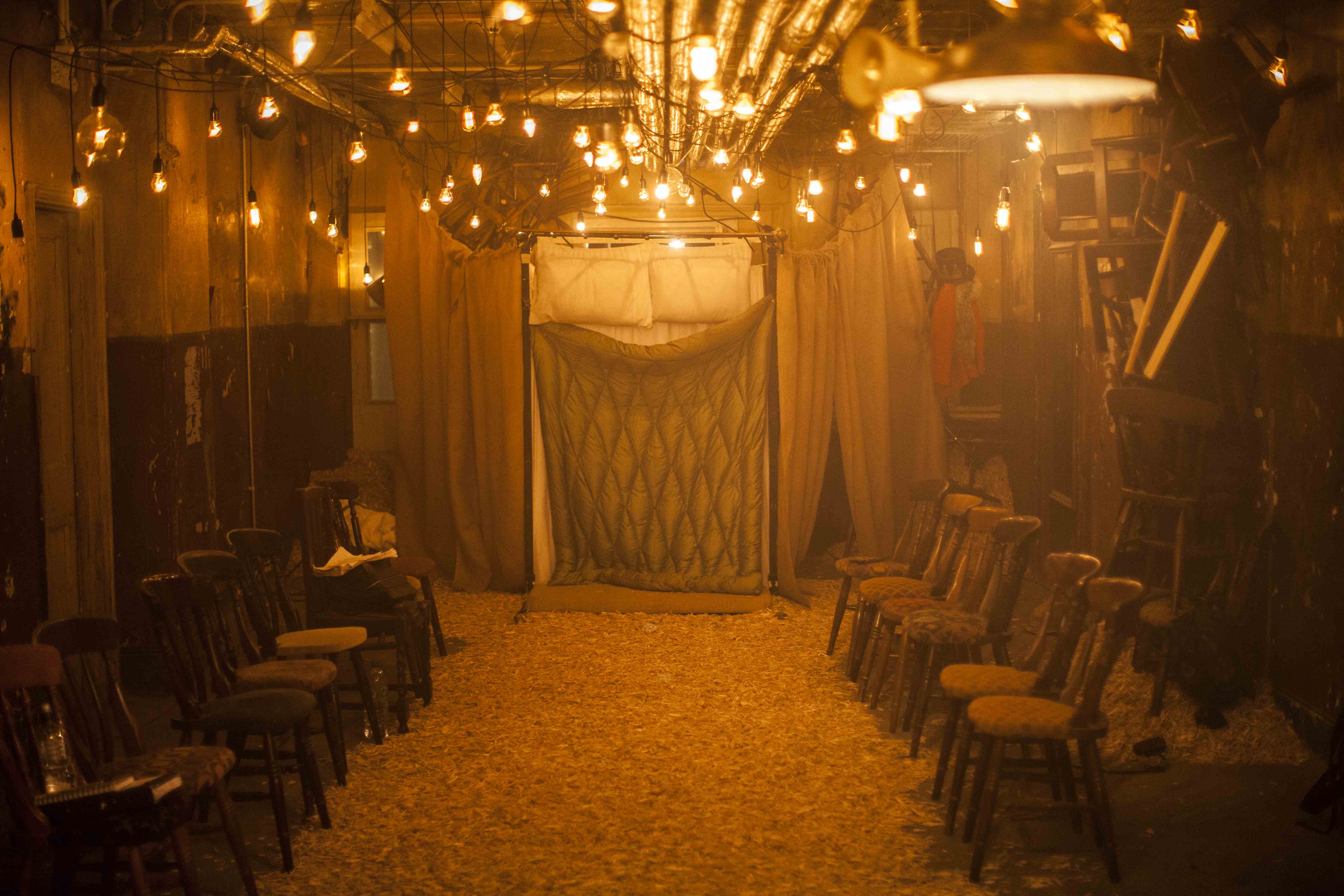 Like falling down the rabbit hole or flying off to Neverland, a night at ‘Grimm Tales’ is truly immersive. It’s what I imagine it would be like to walk through the mind of a storyteller: the Bargehouse, in OXO Tower Wharf, has been transformed into the landscape of childhood dreams.

Spread over four floors, every area of the performance space has been adorned in fairy tale attire. As you ascend the building the stairways are covered with hundreds of portraits and illustrations, torn pages from books, and hallways of mirrors. Tangled canopies of lights hang from the ceilings of each room, where bare bulbs and chandeliers dim and brighten intermittently. 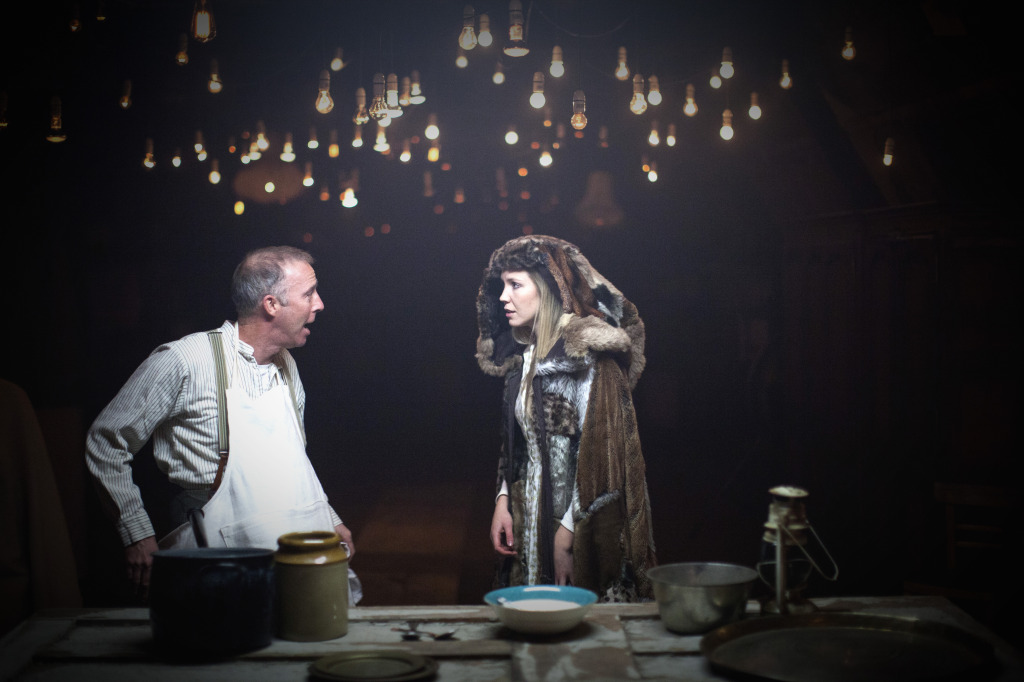 Upon arriving, you step into the Sleeping Beauty / Rumplestiltskin themed bar, where great archways of chairs hang from the walls, defying gravity in their gloriously creative clutter. Towards the back of the room, a spinning wheel revolves quietly beneath a series of tiny gold objects, suspended by wire.

The performance begins when a pair of actors gather up the audience and lead them into the first of the five tales; a lively rendition of ‘The Three Little Men in the Woods”. The use of space is dynamic, as the actors take turns with Pullman’s lines, moving seamlessly across the mulch-strewn floor and engaging the audience seated on benches in the round. In every tale, the use of props and attention to detail is both exquisite and surprising. From strawberries represented by red bobs of thread to colouring pencils used for kindling, there are frequent small nods towards human creativity and the commonplace love of symbolism in storytelling. 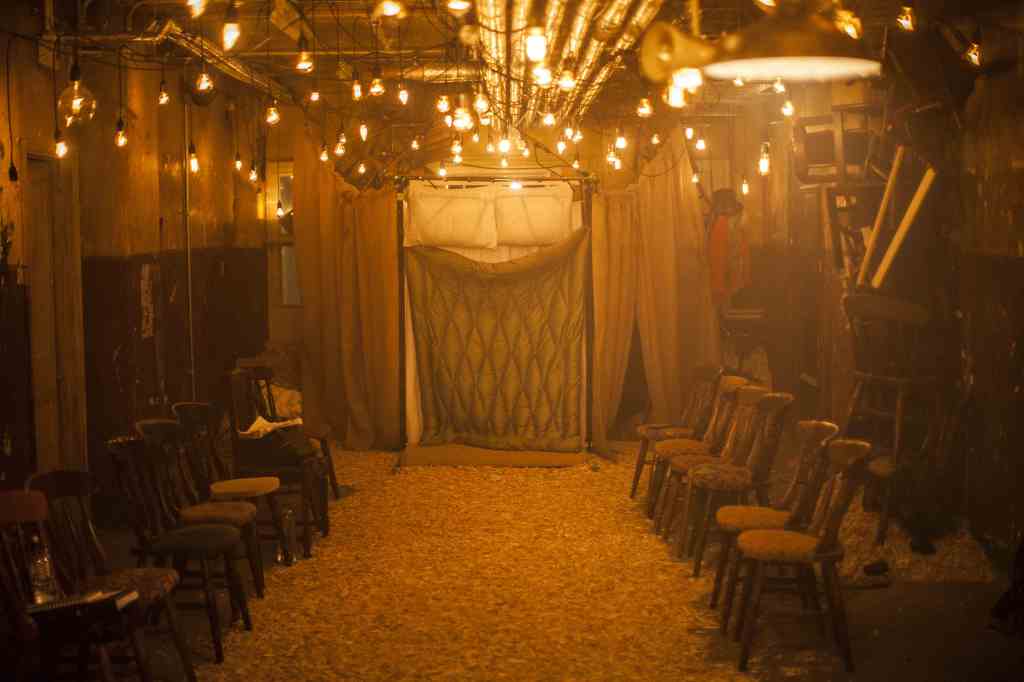 Also present throughout the performances is the desire that there should be nothing ‘Disney’ about these retellings. When rewriting these stories, Pullman wanted his tales to be as ‘clear as water’ and not influenced by his own political views. As a result of this artistic direction, the audience is allowed into the heart of the original story. We are able to see beneath the scenery and costume to the nightmarish doubles and the anxieties that have forever haunted the human imagination.‘Grimm Tales’ reminds you to be polite to strangers, always share, question your parents and – wherever possible – talk to frogs.

After the final story, the audience is invited to explore and take photos of the set. In this time, you can walk through wardrobes, peep through cracks in walls, stare into the magic mirror and marvel at the immense thought and detail that has gone into producing the show.

‘Grimm Tales’ is as much art installation as it is theatre and well worth the ticket price if you book as a group of students and the perfect remedy for cold winter nights.

‘Grimm Tales’ is showing at The Bargehouse, OXO Tower Wharf, until the 11th April 2015. Adult tickets are £45. There is a student and educational group rate available for groups of 10+: £25. For more information click here: http://www.grimm-tales.co.uk/