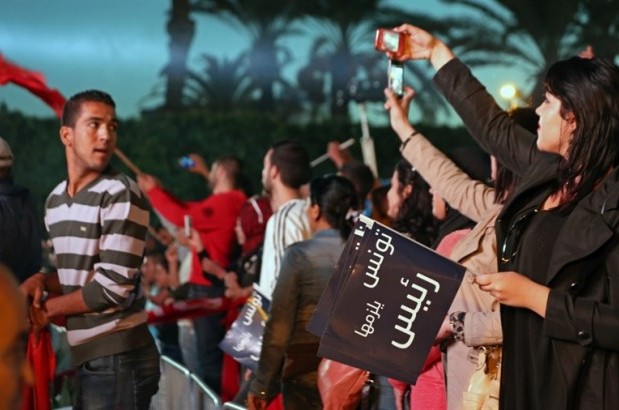 Jessie Deeter’s latest documentary, A Revolution in Four Seasons, follows the lives of Emna and Jawhara, two young Tunisian women from polarised political backgrounds following the Arab Spring. Their stories neatly parallel each other: both get engaged and have children within a similar time frame. The contrast between Emna’s secular city life and Jawhara’s rural village life allows for a stunning duality of backdrops. An impressive feature of the documentary is the number of layers within its narrative: the opening montage draws on formal news footage alongside intimate home videos of revolutionary poetry readings and much else. The rest of the film follows suit, flaunting satirical videos, chat shows, interviews and social media; creating a final product with immense depth.

Although the style of the film is inventive and consequently engaging, certain aspects of the cinematography disrupt its pace and tone. The deterioration from vivid stills to poorly lit, close-up interview segments proves to be untidy and disruptive. During an intimate scene with Jawhara, her face was not atmospherically shadowy but totally invisible, interrupting the flow and diminishing the scene’s emotional value.

Despite this downside, the documentary remains a success largely due to its charm. The human aspects of this political upheaval are depicted by focusing intimately on the two women: we meet their families, share meals with them, join them at work, and even watch their weddings. A Revolution In Four Seasons provides a wonderfully humanised interpretation of Tunisian politics, which women have had a colossal impact on. Emna Ben Jemma is an inner-city journalist and blogger, whose satire and peaceful stance toward the police creates a legitimate and appealing cause for the fall of the Ennahda government. Jawhara Ettis, on the other hand, shapes the constitution of Tunisa as a parliamentary representative of her village. Through focusing on Jawhara’s amiable personality, Deeter adds a dimension of complexity to the film’s portrayal of the members of Ennahda, an organisation commonly stereotyped as fundamentalist and sexist.

Unfortunately, vague outline of the revolution’s beginning skated over some of the key reasons why Mohamed Bouaziz, a street vendor, set himself on fire; he was severely coaxed towards the decision due to unemployment and humiliation at the hands of the police. If these themes had been made more explicit earlier in the documentary, the importance of Emna’s charity work would have been clearer, and this storyline would have tied in more neatly with that of the aftermath of revolution. Furthermore, the angry masses screaming for employment outside the National Assembly were likely emblematic of more deeply entrenched issues in Tunisia, and not, as it may seem to some viewers, only the fault of the original Ennahda government.

Deeter must undoubtedly receive much praise for presenting Tunisia as a markedly feminist state, differentiating it from other Arab nations by underlining women’s voting rights. However, perhaps due to its undying attachment to Jawhara, the film lacked any real foresight about the dangers of extremism within Tunisian politics. One brief mention of Egypt, as well as a few interview segments detailing how women don’t go out at night, were simply not enough to fully depict the potential of an extremist-led Ennhada government. Nevertheless, the intricacy of Ennhada’s political factions was well depicted. Vehement anger toward the terror attacks was shown, with many members distancing themselves from these acts of violence. The film thoughtfully presented solidarity in the face of terror, in a manner pertinent to our current political climate.

The in-depth exploration of Tunisian politics within this documentary serves as a crucial antidote to an increasingly hostile and monolithic world view of Islam. A Revolution in Four Seasons could have achieved greater artistic success without the issues in its cinematography, but this may in part be due to budget constraints. However, it was heartening to watch a documentary on the Arab world that presented such narrative expertise.  Perhaps funding would not be such an issue if this topic was explored with equal depth elsewhere in the media.

‘A Revolution in Four Seasons’ is part of the November documentary season, The Lives of Others, at the Bertha DocHouse. More information, screening times and tickets can be found here.