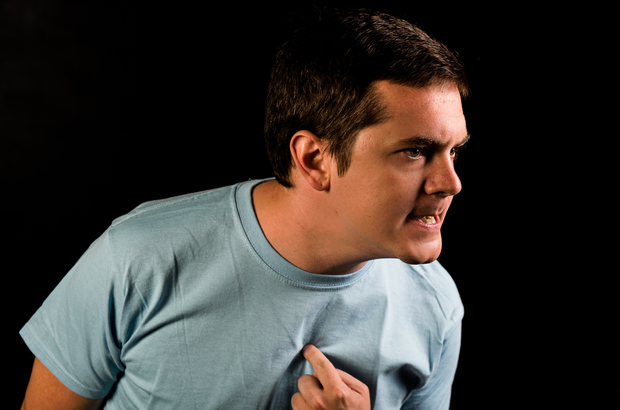 Spoken at a thousand words a minute, Tonight With Donny Stixx gives the audience little time to reflect on what they’re seeing. I remember only one quiet moment in the 75 minute performance, in which I was finally able to get some sort of grip on exactly what a vicious, strange beast I’d just seen. Such is the magic of fringe theatre, and Philip Ridley’s latest spawn in particular.

The one-man show at the new Bunker Theatre starts with the excitable teenager, Donny Stixx (Sean-Michael Verey), making a bit of a racket–a teenager who’s both very self-conscious, but also very unaware. After Donny’s mother has committed suicide, we follow his attempts to turn himself into a magic act, seemingly in an effort to avoid the pain. The play becomes a psychologically acute, often hilarious tragedy in which Donny fails to see how much better he is at tricking himself than he is the audience.

Rather than resigning itself to cringe comedy, Ridley’s interpretation of the awkward teenager trope explores excitingly new territory: Ridley is interested in how children are often forced to parent themselves after family tragedy. It makes for tense viewing at any time, Donny might give up, and in his exhaustion lash out at his audience. It is this sense of risk that Sean-Michael Verey’s acting captures best: at one moment, Donny may be all cheers and forced smiles–safe in the validation of his audience. The next, the simmering anger within bubbles over, and the instability is genuinely frightening.

It would be crude to reduce this play to an exploration of the psyche of a very angsty teenager. Verey must be commended for pulling off such a demanding script, and director David Mercatali, for carefully steering the play along the edge of the absurd, into which it, only rarely, slips too deeply.

Despite one poorly placed song near the end, Tonight With Donny Stixx hits most of the emotional marks it reaches for. Sean-Michael Verey deftly manages to pull off a variety of characters–considering the pace of the script, this can be praised as an astounding athletic feat as much as anything else.

Tonight With Donny Stixx, then, is an excellent tragedy of self-delusion, and its subsequent unforgiving unravelling. What makes it most worth watching, however, is how very convincing the delusion itself becomes.

Tonight With Donny Stixx continues at the Bunker Theatre until 3rd December. For more information: https://www.bunkertheatre.com/whats-on/tonight-with-donny-stixx