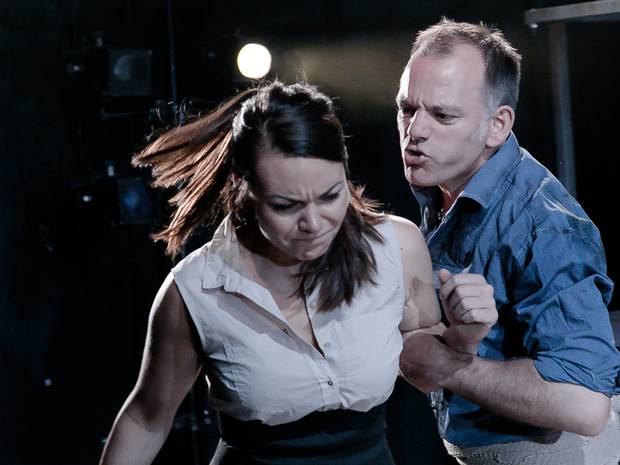 Intriguing and involving, OperaUpClose’s production of Bizet’s ‘Carmen’ refashions the canonical, epic tale of passion and desire into a personal, almost domestic story. Robin Norton-Hale’s new translation does justice to the poetry of the original, making a valiant attempt to wrestle its unwieldy plot into a production of just over two hours. While aspects of the opera appear clunky in their new packaging, overall the production successfully recasts Carmen, the ‘femme fatal’. Here she is a strong woman vulnerable to the animalistic desires of men and, in Norton-Hale’s view, a victim of domestic violence. The protagonist’s demise—surely the acid test for any staging of the opera—packs a considerable emotional punch.

Transported to contemporary Latin America, the staging is both evocative and captivating. The production succeeds in replicating the mesmerizing effect of a more traditional ‘opera bubble’ through intense music and characterisation, and a set that is efficiently designed to suit the small stage. The new libretto is admirably fluid; scenes change with minimal friction and characters slip in and out of the chorus as they are required. Although this tightly focuses the audience’s attention on the condensed story, the more straightforward structure at times leaves some elements feeling a little tacked on.

The character of Michaëla works in the traditional opera as a foil to Carmen’s character. Loyal, caring, maternal; she represents the stable path of femininity from which Carmen has so spectacularly deviated. Sadly, in this more personal and less formally structured production, having such an obvious ‘foil’ does not work. In a diminished world of ‘realer’ passions and fears, Michaëla stands out as a cipher with no substance. Unfortunately the earnest and creditable performance by Roisin Walsh only further emphasizes these problems, though very little can detract from her spectacular soprano.

The music in general is very good; though pared down to a minimum, the sweetness and drama of the melodies are still very effective. Lily Papaioannou gives Carmen’s arias the power and seductiveness of productions faithful to her traditional characterisation. Yet Papaioannou’s performance subtly indicates Carmen’s underlying fear and vulnerability, opening the door to Norton-Hale’s re-writing of Carmen: a victim of an escalating cycle of violence. Mike Bracegirdle’s storming tenor bulks out his tempestuous Don José, and his tête-à-têtes with Carmen fizzle and spark. The inevitable tragedy of these two wilful characters is touchingly played, turning it from the clash of two titans of sexual energy into a small and oddly intimate embrace that is fascinating to watch.

Carmen is showing at the Soho Theatre until 19th of September. Find ticket information here (http://www.sohotheatre.com/whats-on/carmen/)