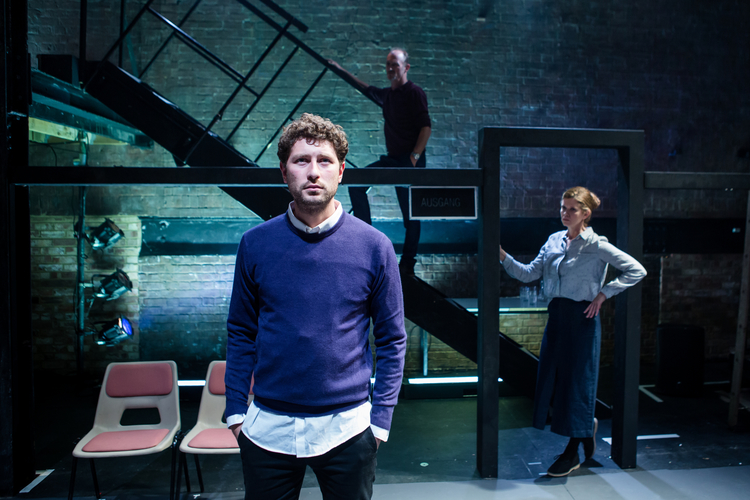 ROSIE HEWITSON reviews ‘hamlet is dead. no gravity’ at the Arcola Theatre.

Austrian playwright Ewald Palmetshofer’s ‘hamlet is dead. no gravity’ is running as part of the Arcola theatre’s VOLTA International Play Festival. Consisting of four plays by award-winning international playwrights, translated into English and staged by British actors and directors, the festival aims to explore ‘how we choose to live in a diverse, cosmopolitan world’. Palmetshofer’s play is certainly diverse, encompassing dark humour, shocking revelations, surreal repetition and metaphysical meditations.

‘It all started with Hannes,’ we’re told. Returning home from the city to celebrate their grandmother’s 95th birthday, siblings Mani (Eugene O’Hare) and Dani (Katherine O’Reilly) learn of the death of the mysterious Hannes, an old acquaintance. At his funeral, they bump into newly-weds Bine (Elizabeth Chan) and Oli (Richard Pryal). Through a protracted and intensely uncomfortable encounter, we learn that the brother and sister used to date the married couple, before ‘the axis turned’ and the pair got together. The couple put on a show of smug contentment, yet neither pair seems satisfied with their lot.

Palmetshofer seems to blame the older generation for the younger characters’ dissatisfactions. ‘The young ones are dying and the old ones are having birthdays,’ the siblings’ mother Caro (Virge Gilchrist) explains exasperatedly. She obsesses over her own mother’s apparent refusal to die, and Mani in turn meditates on the next generation’s impending arrival, coming to take what his generation was never offered. While his parents live a comfortable suburban life, Mani is nearing thirty and is stuck with a one-bed flat in the city.

It’s a theme that translates particularly well to a London audience; Mani’s situation is probably not too dissimilar from some of the audience at this Hackney theatre, and Eugene O’Hare triumphs in a monologue outlining his character’s unhappiness. Katherine O’Reilly is equally brilliant as the neurotic Dani, with excellent comic timing in her delivery of a hilariously bizarre speech about relationships and commitment as ‘lengthways’ and ‘breadthways’ infinity.

The younger characters’ monologues are highlights in this 90-minute play, pauses for reflection in a play which otherwise moves at a pace so fast that it is at times exhausting to keep up with what is going on. We struggle to understand their garbled metaphysics; heaven is a ‘machine’ turning on its axis and the siblings don’t have enough ‘gravity’ to cling to it. The characters themselves occasionally interrupt the action to ‘take a break’ when it becomes confusingly intense.

One might expect a play with such bizarre metaphysical metaphors to be impossible to translate smoothly, though Nick Blackadder seems to have done pretty well with it. The younger characters’ monologues are effortlessly poetic; it’s hard to imagine them sounding more natural in the original German text. The dialogue in some scenes is perhaps overly repetitive, but Blackadder does well to maintain the vital nuance and innuendo that makes the play’s conclusion—when we finally find out what happened to poor Hannes—so shocking while still feeling, somehow, completely expected.

With ‘Hamlet is dead. no gravity’, the Arcola festival absolutely succeeds in introducing its audience to a stylish and intriguing playwright, who I’d certainly never heard of before, and who I’ll certainly be looking out for in the future.