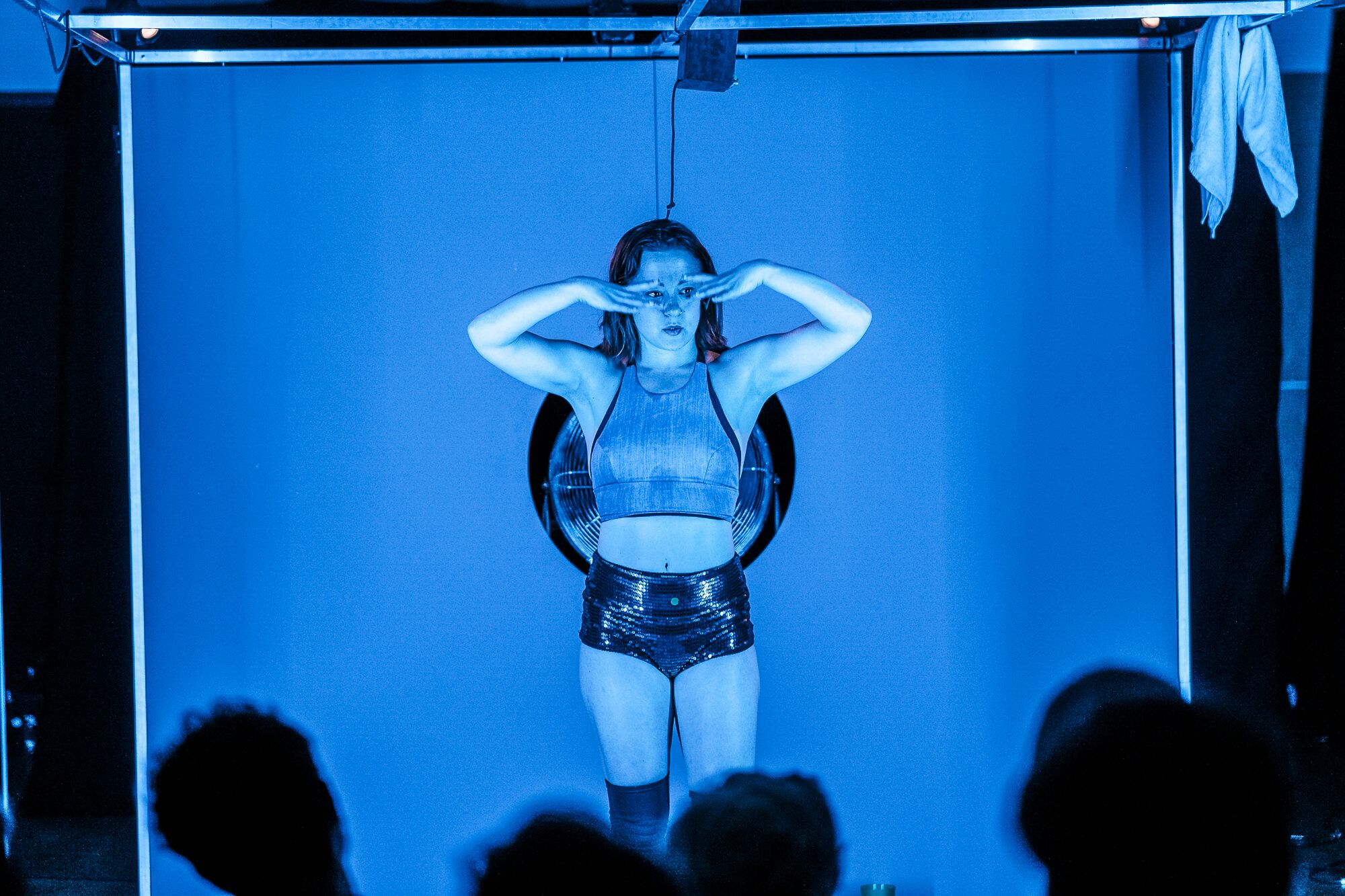 ROSIE HEWITSON reviews ‘Tonight I’m Gonna Be the New Me’ at Soho Theatre.

There are few things more uncomfortable than unwittingly becoming the third wheel in a couple’s domestic. Made In China’s latest show, ‘Tonight I’m Gonna Be the New Me’, feels just like that. The pair in question are performer Jess Latowicki and her real-life partner Tim Cowbury…who wrote the script. Over the course of the play, the audience members become unwilling referees in this passive-aggressive game of one-upmanship, as the couple air their dirty laundry in the most public way possible.

Jess is a bit of an exhibitionist. The show begins with her performing a vigorous dance routine that is exhausting and utterly compelling to watch. We get the sense that she knows this, and relishes the undivided attention. Tim, on the other hand, really doesn’t like to dance; Jess’ dance interludes, therefore, take place ‘in spite of him’. Tim is the kind of guy who hides at parties, cowering in the bathroom for half an hour as a huge queue forms outside. It’s just one of the many things that Jess teases him about. There’s also the fact that he has the kind of face that looks like it has never been punched, and his sudden desire to go off travelling by himself in order to ‘build bridges’. Her mockery is funny at first, but it becomes increasingly embarrassing – less friendly banter and more psychological bullying.

But who exactly is in control? While Jess is in the limelight, Tim is the puppeteer pulling her strings. He watches from the lighting box, taking notes. ‘You dropped a line’, he tells Jess nonchalantly, when she asks him how he thinks she’s doing. The audience instinctively feels protective of Tim as she does her best to humiliate him. Tim, having supposedly written Jess’ cutting lines, suggests that this is perhaps an elaborate strategy to get us on his side. ‘Do you ever feel like somebody is putting words in your mouth?’ Jess asks an audience member. ‘Say yes!’ she instructs them, before they have a chance to reply. As they launch into full-blown criticism of one another’s behavior—‘Why do bite your nails and leave them lying all over the flat?’—we’re left wondering whose side to take.

The play takes a turn for the bizarre as Jess seems to seize control of the narrative halfway through. While the begrudgingly obliging Tim is sent to the bar to get her a beer, she lets the audience in on a secret; ‘Tim is gonna die in a minute’. When he returns, that’s exactly what happens. Yet the heroic story of his death, the platitudes Jess pours on him at the funeral, the whole hyperbolic tragedy has more in common with a rom-com than the couple who’ve been bickering in front of us for the past hour. It seems as though the real Tim still has a hand in the story. It’s impossible to tell.

The title too is intriguingly ambiguous. It could be a promise made by one half of a couple to the other in an attempt to revive their love. Or it could be a newly single Jess’s promise to herself as she throws off the shackles of an unhealthy relationship. Ultimately, only Jess and Tim themselves know what’s really going on.

‘Tonight I’m Gonna Be the New Me’ is a darkly humorous, agonizingly awkward and, at times, quite poignant exploration of long-term relationships and the spectacle we all make of love.

‘Tonight I’m Gonna Be the New Me’ runs until 26th September at Soho Theatre. For information and tickets: http://www.sohotheatre.com/whats-on/tonight-im-gonna-be-the-new-me/