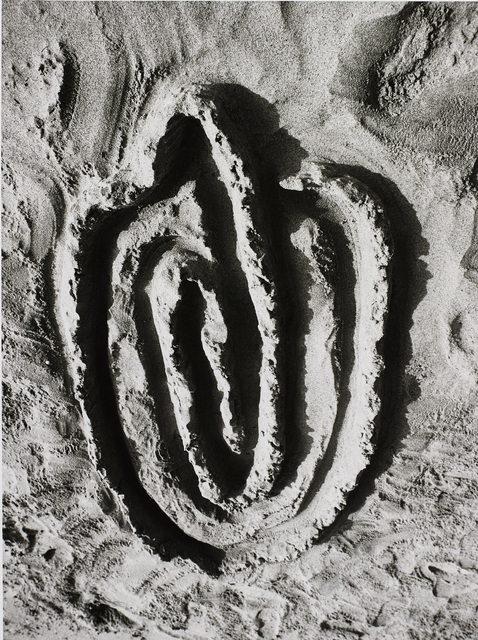 LOLA KAEPPELIN contemplates the work of the artist Ana Mendieta.

Through my art, I want to express the immediacy of life and the eternity of nature – Ana Mendieta

Medieta’s Sandwoman series (1981-1983) should be seen as embodying the above words. In the case of this series, in which the artist used her hands to make carvings in the sand, it is impossible to dissociate the final forms of the sculptures from the action that produced them – and there Mendieta stands on the borderline between sculptor and performer. Viewing these tracings, one can picture Mendieta’s hands moving through this substance. Indeed, the artist’s action and the resulting symbolism are unified; Mendieta’s works appear as if they are intrinsically alive and moving, echoing both the process of their creation and the vibrant dynamism of nature which she aims to represent.

The longevity, yet ever-changing essence of nature is at the heart of these works and contributes to the temporal ambivalence mentioned in her quote.  Nature is represented through various visual elements; for example, the artist utilises quasi-abstract vulva motifs, spirals, rounded shapes, leaves, and other organic forms that serve to recall nature’s fauna and flora. However, Mendieta’s visuals are not only inscribed in the realm of the natural; she also joins her own body to the work through the technique she utilised. Indeed, Mendieta’s hands were her only tools; she thus interweaves her own corporeality into the sand. Making her work very personal through this action, she moves away from an essentialist depiction of the female body which aims to define a universal essence of womanhood. On the contrary, Mendieta offers her interpretation of the relationship between nature and a physical gendered body, one that belongs uniquely to her, rather than connecting to any universal femininity. Here she presents a simultaneous temporality and permanence: the work straddles between the timelessness of nature, and her more personal mortal body.

This visual union of process, material, and theme perpetuates Mendieta’s artistic response to nature and temporality. Her response is not fixed in time; in each instance, she finds herself positioned between belonging to the far-extending natural world and to her own ephemeral timeline of existence. Much like the mortal body of the artist, these sand sculptures were destined to one day materially disappear. Now, photographs of the works are all that remain of the series. However, the permanence of these digital images further depicts the inexorable decomposition of what is represented in them: they show that they are all we have left of these works.  Yet, the works intrinsically belong to the sand they are made of, an ancient substance eternally bound with the earth, and therefore, live on through this connection.

Mendieta’s forms often resembled prehistoric drawings. Indeed, by using natural materials in her practice, Mendieta becomes physically closer to the earth, and therefore closer to the history it encompasses. Her art takes on an almost mythological stance, which conceives of gods, living beings, and natural powers as united. To do this she uses a wide range of symbols signifying the human body, nature, the earth and the utility of the earth. Through this rich symbolism, she conveys a collective, historical body in her sculptures, one that visually encompasses the entire timeline of human intervention on the earth, despite her works being so contingent on the individual movements of her own hands.

Mendieta was born and raised in Cuba, before being separated from her family and being sent to the United States at the age of twelve, a result of the worsening tumultuous political situation in her home country. During the period in which she created the Sandwoman series, Mendieta often found herself in Miami, the closest point to Cuba from the United States. These beaches, so close to her home country, have a strong significance for the artist. By inscribing these signs in this location, Mendieta is paying homage to her ancestry, her intervention reconnecting her with her roots.

Furthermore, this artistic gesture, located at ground-level, is profoundly anti-institutional. The artist is not aligning her work with any prevailing art-world discourse; she is humbly inscribing herself in the passage of time. Materially, her work will disappear, yet it remains profoundly connected to the beach it was made on, and indeed carries on living in our minds. It seems, therefore, that our discussion of temporality is just as relevant as a discussion about the work’s permanence.

Paradoxically, the use of sand in the series carries this idea of permanence. If the sculptures disappear, their material remains on the beach,  allowing for the artwork to live on in a new deconstructed form. This earthly permanence exists outside of human mortality. The sculptures are simultaneously bound to disappear, yet they are made of this timeless element. Consequently, the form will fade but the body of work can never be entirely removed – with its visuality also living on through photography, making Mendieta’s artistic approach permanent in another sense.

Moreover, there is an aspect of this series that is even more permanent than the sculptures’ materiality. Indeed, because these pieces are fleeting, the work becomes the site itself. Mendieta makes these sculptures at the beach, she modifies the material that is sand by adding her creation, she gives her art to the place, transforming it. In this sense, Mendieta is not the individual author of these works: she co-created them with the earth from whence they came.  The fact that these works are ephemeral leads us to see in this work a more symbolic, even spiritual permanence, where the work persists on the beach and in our memories. Permanent and ephemeral come together in this series: Mendieta’s intervention remains in the sand and the earth long after its physical disappearance.

Likewise, Mendieta is absent in this series; the only trace of her physicality is the tracing that is destined to disappear. She doesn’t leave a signature, yet she remains present through the existence of the work itself. Through this role of present/absent artist, she is once again anti-institutional, her artistic approach taking precedence over her status. In this sense, Mendieta should be seen as addressing the power relations that feminism was attempting to destabilise at this time. Her practice saliently relates to questions about which relationships were to be entrenched and permanent in society (in other words, those which subjugated women), and challenges that which was seen as ephemeral and unimportant. Undoubtedly, Mendieta exposes the futility of these supposedly entrenched relationships. She shows that the land does not inspire her productivity and profit, only art. And even her art, she creates it ephemerally, as opposed to the custom of storable and exhibitable art.

Ana Mendieta’s Sandwoman series possesses an ability to live on longer than its physical form. She demonstrates to us that the creative process can be more life-affirming than a finished artwork. Her sensual, bodily action lives on beyond nature’s laws. Although I have proposed one reading of her Sandwomen, I should note that her work finds new meaning in the gaze of each person that looks upon these mysterious, personal works, therefore making it clear that Mendieta’s work is very much still alive and here to awaken our senses.