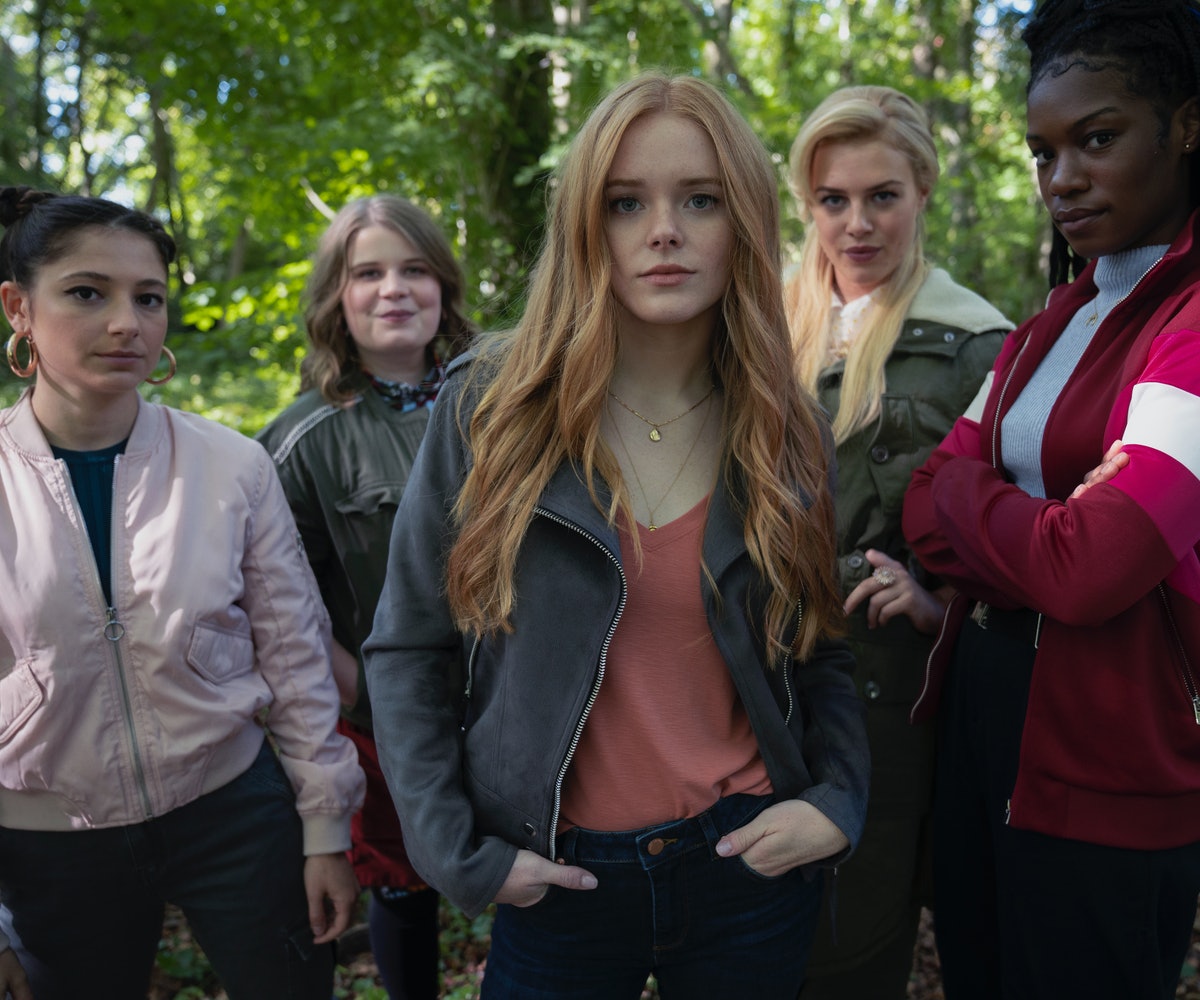 VINNY SANDHU discusses the issues with Netflix’s Fate: The Winx Saga (2021), the live action remake of beloved cartoon The Winx Club, which has replaced the pioneering aesthetics of the original with overplayed archetypes of the dark fantasy genre.

The development of young adult fantasy films and television series since the late-2000s has brought the importance of clothing and costume to the forefront of entertainment. Within this genre, archetypes are being repeated time and time again, meaning characters have begun to all look the same as each other. In turn, storytelling through clothing, and indeed through representations of identity, has become stagnant. Fate: The Winx Saga (2021), the new live action adaptation of Nickelodeon’s 2000’s animation The Winx Club, is riddled with issues. The sense of identity that was so detectable in the cartoon has been largely stripped from this show through its choice of clothing, setting and overall aesthetic. This can be poignantly felt when you compare Fate to other young adult shows outside of the fantasy genre, such as Gossip Girl (2007-2012) and Euphoria (2019). In these examples, costumes pinpoint a character’s development, show their feelings and create their own individualised character archetypes in their own genres. The same cannot be said for Fate, in which the original diversity of the cartoon characters has been removed, heteronormativity promoted, and woke-fishing used to address real issues.

Much of the anger and disappointment generated in response to the show is a reaction against certain aesthetic choices. In the wake of the series, there has been an endless number of social media posts about how it ‘should’ have been executed. I concur with most of the suggestions of alternatives put forward by individuals on Twitter, who have compiled together mood boards of clothing they think the characters should have worn, and the creators on YouTube and TikTok who have been pulling together outfits that would have highlighted the uniqueness of The Winx Club in contrast with the decisions made by Fate’s producers. These clothes featured in the original cartoon were a huge inspiration for my own creative expression and exploration of my visual identity as a child and a young adult. Uniforms have always been a mandatory part of my wardrobe; the clothes worn by these characters aided my personal growth,  empowering me to realise my own agency in being able to define how I wanted to present myself and be perceived by wider society. When I had to decide on my everyday clothing from sixth-form onwards, I took the clothes featured in The Winx Club as a source of inspiration. Now I’m not afraid to experiment with colour, adventure and unconventional styles.

The lack of originality in the styling of Fate demonstrates the huge gap in the market of the young adult fantasy genre for shows with unique character identities. For example, Bloom wears the same combination of leather jacket, skinny jeans and t-shirt as Clary Fairchild does in Netflix’s Shadowhunters (2016-2019). Stella and Terra opt for similar earthy coats that Bella Swan can be found wearing in any of The Twilight Saga films (2008-2012). Musa and Aisha wear the same generic, casual outfits that can be found in the Percy Jackson & The Olympians (2010-2013) film series. There is so much overlap within these comparisons, and these series’ original source materials did not even have a distinct sense of aesthetic identity in the way The Winx Club did. We cannot continue to receive the same dark and destructive young adult world remixed.

Let’s consider other series in the young adult fantasy category. Shadowhunters (2016-2019), Chilling Adventures of Sabrina (2018-2020), and The Vampire Diaries (2009-2017) all feature narratives which sit comfortably in the genre of dark young adult fantasy. The Winx Club, however, does not fit into this genre, which is characterised in these shows by a heavy use of black and earthy tones, with colour featuring here and there only ever to set the tone. The original stylistic decisions of Fate do not allow it to fit into this dark sub-genre of young adult fantasy, with the show much more aligned with colourful fantasy; these decisions do not allow it to conform to this aesthetic, and indeed the show should not conform to be something it is not.

Furthermore, there are none of the iconic transformation sequences of the original series in this live-action adaptation, other than that of Bloom – another feature of the show I found disappointing. In the cartoon, each season comes with a new level of transformation for the fairies. There’s the small details of the ‘Charmix’, the magnificence of the ‘Enchantix’, and more. The fairies and specialists are recreated as their shadowhunter counterparts, and the characters become their vampiric and gothic alter-egos for the majority of the series. In Fate, the idea of featuring fairies who can transform is now a mere plot device;  the wings that appear on Bloom’s back are not about the identity of the individual character as they were in the original cartoon, but instead are solely about ancient magic and about the importance of physical power.

In the original, Stella offers us more exciting fashion choices, donning her iconic orange mini skirt and green bralette. Flora’s pink strawberry print skirt is equally as enduring. Tecna and Musa showed us that not every outfit has to be overtly feminine, with Tecna opting for sportswear styles and Musa for tomboyish and laid-back clothing. Of course, with each season the characters change their daily clothing; it was precisely these outfit changes that made the characters and the series stand out amongst others being made at the time. Even the online game, ‘Dress Her Up’ on the Winx cartoon’s website, had more originality than the live-action adaptation. Fate did not seize that rare opportunity to push young adult fiction costuming in a new direction, but rather visually shares the aesthetic of shows like The Secret Circle (2011-2012), another example of a dark young adult fantasy show – indeed, one that came out 10 years ago. The lack of stylistic progress is astonishing to me.

Admittedly, if the producers were completely faithful to the cartoon it could have come across as garish; but by being safe Fate negates imagination entirely. Why do shows such as Gossip Girl, Reign and Euphoria have a more distinct style for each of their characters, when their storylines exist in the realm of reality? The Hunger Games (2012-2015) dresses the characters from the Capitol in fantastical and visually creative costumes, something I believe should be seen as an exemplar for the progress of the dystopian category within young adult fiction.

Moreover, I was especially disappointed with the costumes of male characters.  Drastic changes have transformed them into generic young adult fantasy boys who primarily dress in simple, everyday clothing and neutral tones. Sky and Riven are the only male characters who make the cut in the live-action adaptation. Yet, we are deprived of Sky’s flared trousers, Riven’s crop tops, and, indeed (because of their being dropped from the show), of Brandon’s bold colour blocking and Helia’s tunic shirt. Such variety was missing from the character’s hairstyles, too, with Helia’s long hair, Nabu’s braids and Timmy’s cropped cut also axed from the live adaptation. When it came to the character’s uniforms, viewers were offered blue capes, jumpsuits and knee-high boots, as opposed to the textured sweaters, tank tops, skinny trousers, and running shoes or combat boots of the original. Everything has been rendered bleak and grey in this live-action adaptation. We are deprived of the opportunity to explore different choices of clothing on masculine bodies, something the cartoon did so well.

Likewise, there was a chance in the adaption for the same stylish clothing found on thin bodies to be shown on body types outside of the conventional editorial norm, and indeed on people of colour. However, Fate just gave us more of the same. The body positivity in the show is non-existent; even though Terra is a plus-size character, her body is derided through insults and dressed in bulky clothing. Through their lack of creativity, the creators failed to give Terra effective character development like that of Kat in Euphoria. Kat was not simply a fat girl who discovered her own sexuality; she gained a sense of who she was and who she wanted to be through exploring clothing and make-up. Euphoria used clothing as a form of power. Fate took that power away from Terra. Instead, they once again chose a character archetype that exists in most young adult fiction. In the cartoon, Musa incorporates East-Asian inspired clothing into her Y2K wardrobe and creates a wonderful, eclectic style for herself. Fate, in contrast, presents a Eurocentric approach to fashion. These missed opportunities become repetitive and honestly tiring to watch. When creators do try to incorporate some of the original uniqueness of the cartoon, using more experimental makeup in the one episode that features a party scene, they still fail. It is poorly executed, unsuccessfully imitating avant-garde and editorial make-up.

Fundamentally, Fate restrains the beauty of the magic that supposedly fuels the show, for all magic here is so strictly defined. The ambiguity in what the fairies’ powers could do in the cartoon meant it really was a limitless fictional dimension. With Fate, we are left with a very narrow conception of what the character’s powers can achieve. There is no growth in the fairies’ powers, nor is there much growth in any other aspect of Fate.

The use of visually exciting costumes and colour palettes in contemporary young adult fantasy is vital in reinvigorating this genre which has remained stagnant for years. Yet, in Fate, viewers are bombarded with more of the same; a generic aesthetic that will be binge-watched in one series and crudely served again in another. I understand that Fate is not supposed to be a faithful remake of the original show. Yet, it has been promoted as an adaptation, one that older fans of the cartoon can apparently enjoy.  There is nothing appealing about this reworked, and now wholly unoriginal, storyline. If anything, Fate is a startling reminder of how young adult fantasy needs to transform and evolve. If the cartoon fairies in The Winx Club could do this each season, then perhaps the young adult genre can too.