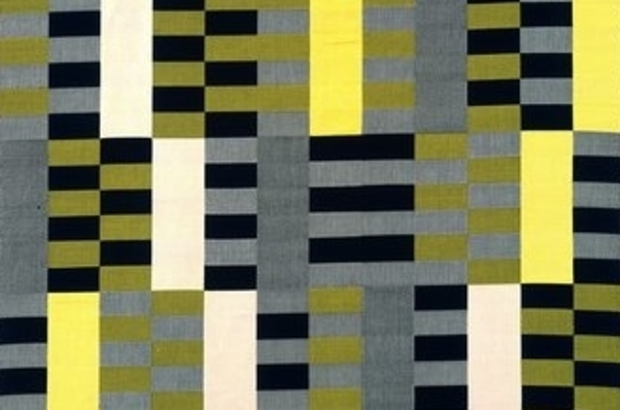 In the Tate Modern’s new retrospective of Anni Albers’ geometrically complex textile art, we are made to appreciate the many layers of weaving. From ancient crafts, to decorative art forms, to architectural weave types, Albers’ intricate artworks and designs engage heavily with many types of textile production. This exhibition guides us down the many paths that Albers took her weaving, first as a reluctant student and later as a teacher and renowned artist.

Albers’ weavings are filled with contradictions. She takes an ancient media, traditionally ornate, and creates modern and linear patterns instead. She uses soft threads such as cotton, linen, silk and weaves them in bold, almost harsh designs. Neither two nor three-dimensional, her tactile works falls somewhere in between painting and sculpture.

While teaching at Black Mountain College in the USA, Albers encouraged her students to ‘imagine […] they are in a desert’ ‘at the point of zero’; in other words, to learn to create something from nothing. This seems to be an attitude that she herself adopts. Displayed in the exhibition are necklaces created together by Albers and her student, Alexander Reed, made from recycled components. One necklace piece is designed of only a strainer and a chain of metal paperclips. She and her student rehabilitate these everyday materials, ultimately demonstrating Albers’ approaches that show her ability to create magnificent pieces from a minimal number of materials, making us reconsider the way we view everyday objects.

Albers’ impressive use of limited materials is seen again in her iconic work, Black White Yellow, presented at both the beginning and the end of the show. In this piece, she only uses three different coloured threads to produce a range of beautiful tones. She also chooses to use cotton – a simple material found in practical items like sheets and clothing – rather than richer fibres often used in weaving. This is in fact a clever choice, as the vertical grain of cotton compliments the rectangular design of the artwork. At first glance, the piece appears to consist of a simple, linear pattern, giving the illusion of order. In fact, there is no regularity or repetition at all. On closer inspection, rectangles seem to dizzyingly slide and move. Thus, Albers has created an intriguing artwork that forces us to step closer and explore it.

Albers’ pictorial weavings are markedly different to her linear pattern pieces; they show the breadth of her skill. While many of her works lend themselves to print, these weavings must be seen in real life to appreciate their minute detail and texture. Helical sections and bundles of knotted rope arranged in star formations lie amongst the multiplicity of layers, hung by single threads. Particularly striking is Six Prayers, a work that Albers was commissioned to create as a memorial to the six million Jewish people who died in the Holocaust. The six pieces that make up the artwork are akin to scrolls of text in appearance due to the winding horizontal pattern that lies atop the flat background. It is in fact not uncommon for Albers’ works to appear text-like. Following her travels to South America, where she saw ancient tapestries from the pre-Columbian era, she viewed weaving as a language of its own. In Six Prayers, she uses metallic yarn for the text-like pattern which shimmers against a dull and earthy background, symbolising light and hope in a terrible time.

The weavings on display are not representative of Albers’ entire body of work – also included are more practical pieces such as decorative screen dividers and bedspreads that Albers was commissioned to design for Harvard dormitories. By presenting art and design side by side, the exhibition begs the timeless question: ‘what is art?’ Why is it that some of Albers’ creations are classified as ‘artworks’ and others merely ‘objects’? This exhibition seems to combine abstract visual geometric aesthetics, with aspects of production and design, ultimately challenging our definition of art.

Albers’ artworks are a feast for our mind and senses. They force us to look closer, to feel textures with our eyes, to reconsider our perceptions of weaving and explore its many applications. We are confronted with the contrasting identities of weaving: that of a science – a study of textile properties and techniques – and an art – a form of expression. Albers masters both and we are merely her students.

The Anni Albers retrospective at the Tate Modern is on display from October 11th 2018 to January 27th 2019.