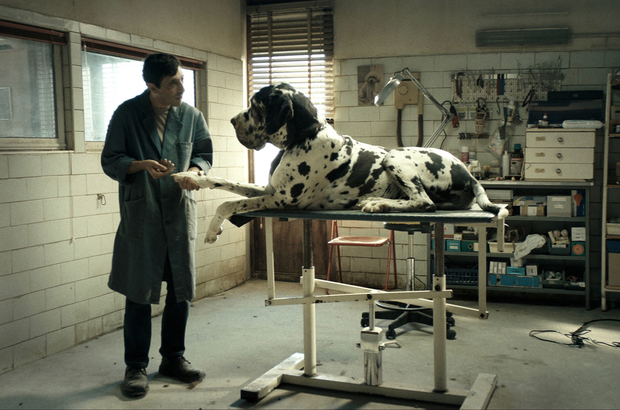 Set in Magliana, a dingy suburb of Rome, Matteo Garrone’s Dogman is a skilfully crafted tale of drama and crime. Loosely based on a real story, the film follows Marcello, a good man in desperate need of acceptance and validation. Garrone’s take on such universal themes is soaked in brutal realism. This allows Dogman to fully immerse the viewer in a tense but powerful narrative.

Marcello – performed spectacularly by Marcello Fonte – is an amicable but weak figure, who runs a dog-grooming business. His fondness for dogs is exceeded only by his love for his daughter, Sofia (Alida Baldari Calabria), whom he sees only occasionally. He is a well-liked member of his community and lives out his days pampering his pets and playing football with his friends. His nights, however, are spent dealing cocaine. Through this side hustle, he meets and forms a dangerous friendship with Simone (Edoardo Pesce), a former boxer whose notorious partiality to violence keeps the entire neighbourhood in fear of him. A far cry from dog grooming, Simone’s livelihood is made by burgling homes and small businesses. Marcello, although afraid of him, is convinced that Simone can be tamed; he is like the hostile Rottweiler whom Marcello successfully calms down in the opening scene of the film. His efforts with the hoodlum prove less successful. Their tumultuous relationship begins to implode after Marcello is sentenced to a year’s imprisonment for a robbery committed by Simone.

Fonte and Pesce deliver two outstanding performances. The former plays the film’s protagonist with impeccable credibility, mutating from a non-confrontational Marcello to a changed, more confident man after his spell in prison. His story arc is undercut by the tender interactions he shares with the loves of his life – his dogs and his daughter. This gives the viewers access to the layered and complex nature of his character, whilst giving us a rare moment to breathe between scenes of perpetual suspense. Yet the standout performance of the film is Pesce’s, whose presence on screen is inescapable. Simone’s thuggish shaved head, tracksuits and scarred face are unceasingly intimidating. An almost unbearable sense of unexpectedness follows him into every scene.

Garrone’s use of long takes enhances this sense of alarm while keeping one aching with suspense. This is exemplified by the final shot, which follows Marcello’s exhausted face just long enough for one to start to feel the same way. It lasts just over three minutes but Garrone is all too aware that it feels much longer.

In a similar way, Nicolaj Brüel’s cinematography creates an oppressive atmosphere that is only lifted in the scenes depicting Marcello and his daughter. In these moments, Brüel uses warmer tones and sunny scenes as opposed to the blue and grey palette applied to most of the film. The default grimness, which is only seldom paused to make way for joy, creates an imbalance which aligns perfectly with the difficult lives of the characters.

In the vein of Garrone’s 2002 feature, Gomorrah, Dogman is an immensely powerful film which takes a charitable look at those who are forced into lives of moral ambiguity. It is the story of the descent of a man down a dark path, which he follows until he has reached his tipping point. He wants to turn around and reclaim the values he has forsaken, but it may well be too late for that. Fuelled by a uniquely arresting atmosphere and an array of masterful performances, this film should not be missed.

Dogman is on general release.