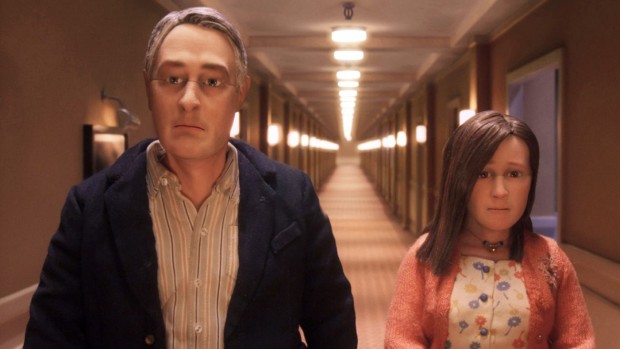 In the opinion of the late David Foster Wallace, ‘we all suffer alone in the real world; true empathy’s impossible’. For Wallace, the difference between ‘low art’ and ‘serious art’ is the refusal of ‘serious art’ to allow any easy escape from this distressing fact – to do so would be not only lazy but dishonest. Serious art must therefore function not as an opiate but as a palliative. Serious art is not about making money – the market for a product that is apt to make you uncomfortable, or force you to work hard, is naturally a small one.

Wallace’s artistic criteria might throw some light upon Charlie Kaufman’s new film, Anomalisa. Not only does Anomalisa make for uncomfortable viewing at times, it also took just $135,000 on its opening weekend – from a production budget of around $8,000,000. But successful art, serious or not, must yield pleasure at some point, whether this comes in the form of laughter or insight.

Anomalisa centres on Michael Stone (David Thewlis), a published expert in the field of customer service. He appears a fairly nondescript business man – anonymously dressed, solitary, and quiet – on his way to a conference in the Fregoli hotel, a place of precise, expensive banality (‘bathroom, air conditioning and heat control … minibar – all self-explanatory I think’). At first, Michael might not appear distinguished; but he is, in fact, the only person in the whole world. Everyone else is a simulacrum, part of a monoculture of duplicates, all issuing their mundane greetings and banal demands in the same affectless voice (Tom Noonan). With understated yet poignant irony, Michael tells his son: ‘I’m glad to hear your voice’. “Did you buy me something?” seems an appropriate response for the voice that speaks it.

This is one of many references in the film to affiliate consumer culture with omnipresent banality. This observation falls far short of insight – as it is so ubiquitous, it often threatens to enact the banality it anticipates – but the film never consigns itself to didactic preaching. Michael looks desperately for ways to escape the uniformity. The toy he eventually buys for his son is Japanese, antique, and filled with semen – a motorised, singing sex doll, pretty in its novelty if in nothing else.

In hindsight, it is difficult not to see the doll’s similarities to Lisa. Lisa’s voice (Jennifer Jason Leigh) is first heard through the walls of Michael’s room as he dresses after a shower. His euphoria is both immediate and urgent: he frantically pulls on his clothes and charges out of his room in search of the source, knocking on every door until he locates the anomaly giving this film its title. After a series of touchingly awkward exchanges, Michael invites Lisa back to his room – having negotiated her roommate’s sexual assertiveness and assured a bashfully incredulous Lisa that it is indeed her that he wants.

They sleep together, in a scene which is both stirringly emotive and rather creepy owing to the mannequins’ jerky, inhuman manoeuvres (the film was shot using stop-motion animation). Lisa’s vulnerability matches her quirkiness; the love-making scene is a mutual capitulation that allows for a moment of genuine human connection. Such rare moments as these, enabling companionship and solidarity, are all that punctuate Michael’s otherwise totalising solipsism.

Yet Michael is a hyperbolic (if reluctant) solipsist. The name of the hotel invokes the Fregoli delusion: a condition through which sufferers hold the belief that all other people are in fact the same person. Michael believes that there is a conspiracy against him, and that, jealous of his and Lisa’s uniqueness, the race of clones desires to sever him from her. But they need do nothing – Michael’s personality promises to do all the work itself. Michael feels isolated even with Lisa and he has a selfishness caused not by callousness but by a failure to recognise the humanity of anybody else. To Michael, other people seem like interchangeable automatons, and they are treated as such.

Though the outlook is bleak for Michael, there are surprising moments of humour for those not completely demoralised by the mundanity or poignancy of the conceit. It becomes less and less easy to identify with Michael, as his isolation is revealed to be a consequence of his own egocentricity rather than a defect of the world. The people around Michael are loving and eager but he excludes himself from them. Finally, Anomalisa’s insight comes in the form of an extrapolative warning. Self-love is excellent in small quantities – but too much of it tends to precipitate self-imprisonment.

‘I don’t think I ever felt love like this … was’, writes Lisa. ‘Maybe someday we’ll meet again under better circumstances.’ Currently, there are no sequels planned.

‘Anomalisa’ is on general release.