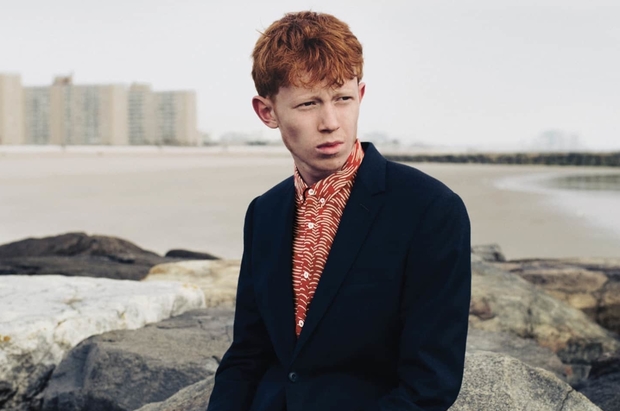 For a twenty-three-year-old singer-songwriter releasing his second studio album under the name King Krule, Archie Marshall is an accomplished musician indeed. Having debuted with the overlooked project Zoo Kid seven years ago, King Krule came to light in 2013 with his debut album 6 Feet Beneath the Moon – a chaotic yet blissfully raw and original record of reverberating guitar riffs and harsh vocals blended with the brassy tones of jazz and hip hop. Four years later, Marshall releases his second record under the King Krule name, The Ooz. As excited fans (myself included) wait outside Kingston’s Hippodrome on the eve of his album release, the anticipation is palpable.

If there was any concern that Marshall would use the show simply to showcase his new album, any trace of it quickly disappears. The familiar screaming introduction and exquisite outro riff to ‘Has This Hit?’ rings round the Hippodrome to a unanimous sigh of relief from the crowd, who move as a singular mass of sweaty bodies. The biggest response from the crowd came is for King Krule’s early masterpiece, ‘Lizard State’, a fast paced, tightly-knit cacophony of brass, strings and percussion that contrasts aggressive rap lyrics with melancholic lyrics: ‘Still feeling the pain/ Of you not loving me the same’. Marshall reassures his fan base that he is back as himself, not another side project, before he dives into his new material.

The Ooz has a more sombre atmosphere overall – tracks like lead single ‘Czech One’ utilise synths and distortion, and are interspersed with mellower tracks from his newer material, including ‘The Locomotive’ and an unrecorded sequence of brassy jazz he calls ‘Muzak’. Marshall also plays a series of rhythmically tighter songs like ‘Emergency Blimp’, ‘Dum Surfer’ and ‘Slush Puppy’, where Marshall allows the percussion to dictate the pace and holds back slightly on his vocals. This represented a clear break from his previous material; in songs like ‘Easy Easy’, ‘Out Getting Ribs’ or ‘Has this Hit?’, his voice and guitar are really the only elements he needed to bring the song to life.

Despite these changes, the new music is, overall, a slightly toned-down variation of what we’ve heard before. ‘Dum Surfer’’s riff may be cloaked in more elaborate instrumentation, but it remains so similar to 2013’s ‘Rock Bottom’ that it is hard to believe it is not a direct reference to it. Lyrically, not much has changed – songs about winning a bet and getting mashed, or heartfelt lamentations that ‘Nothing is working with me’ are not too far removed from the world of 6 Feet Beneath the Moon. For the most part, Marshall has not gone as far as one might have hoped in integrating his jazz, hip hop, and electronic influences on this album, nor have his lyrics taken a big thematic step in any particular direction.

Nevertheless, the show goes on and plunges straight back into his classics for the home stretch. Marshall needs only mumble ‘This is dedicated…to a Mr. Bream…’ to create an eruption of excitement which he sustains for the rest of the show. ‘Rock Bottom’’s signature riff ran into ‘Baby Blue’, a heart-rending sing-along which had the crowd at King Krule’s feet. ‘Easy Easy’, perhaps his best-known song, gets one last hurrah from the mosh pit section of the crowd, and ‘Out Getting Ribs’ — oddly enough, the first song he ever wrote aged 15 — closed the set in style.

King Krule makes his return to the stage with a convincingly passionate performance. The Ooz does share distinctive features with 6 Feet Beneath the Moon: it is a more ambient record, not quite as raw as its predecessors, lacking big hitters like ‘Easy Easy’ or tear jerkers like ‘Baby Blue’. Fans who were expecting music to scream to from the rooftop of a South London carpark may be disappointed. But overall, the change is not as exciting as I had anticipated. What I expected to be brave step forward into King Krule’s genre-bending musical world is instead a mere step in that direction. It is an encouraging step — but one would hope it won’t be 4 years before another is taken.