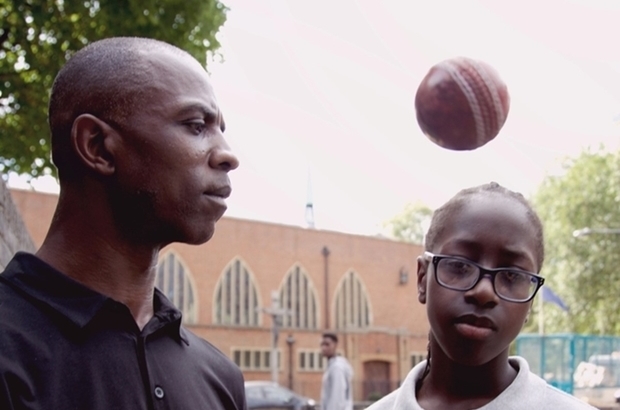 That an imagining of how the life of the bustling streets of London could be recreated by a single actor attests to the true scale of the challenge that was embarked upon with the production of Arinzé Kene’s good dog. The monologue takes its audience through a touching coming of age story, detailing the struggles of growing up in a multicultural London community, and trying to find a sense of identity in what seems to be an increasingly cruel world. As the young boy’s perspective, filled to the brim with good intent, begins to warp in response to his surroundings, the tension that simmers throughout the show develops into a shattering finale in the centre of the 2011 London riots.

Directed by Natalie Ibu, Anton Cross’s arresting performance manages to sustain a subtly accumulating frustration, expressed through his own character and also via his impressions of exchanges between the other people on his street. Despite the stripped-back set, which presents only a large black cube, the lively energy and lucidity of Kene’s writing brings a whole world into technicolour: you leave with a sense of having been immersed in the atmosphere of a North London neighbourhood in all its vitality.

The play opens with the energetic and optimistic outlook of adolescence. Arinzé Kene allows the audience to be guided by the internal monologue and observations of the unnamed ‘Boy’. His wholesome outlook, sculpted by the advice of his father to always ‘be good’, shapes the telling of the story in which his innocence veils the darker goings-on that he observes from the balcony. When the audience is presented with naive, unknowing hints at the adultery, alcoholism and depression he is witnessing (without full comprehension), one can’t help but wonder if his life will take a similar path. Through the progression of the story, we see the boy’s growth into maturity, and the inevitable expansion of his outlook. From the same balcony, he looks on the world with an increased understanding, and a swelling sense of doubt.

The spanning timescale and patchwork of characters and narratives gives a wide and in-depth perspective into the complex social climate and underlying unrest, with each story creating neat parallels to lead character’s development. By incorporating different individuals, the audience is given at least a fragment of insight into the intricacy and breadth of oppression felt within the community: the corner shop owner, ‘Gandhi’, trying to make ends meet with his only companion, a stray cat, and the crippling disapproval of his family; the loving father, Trevor Senior, living in fear for his son amongst the violence and crime of local youths; and Mr Boateng who peppers passers-by with complements whilst battling terminal alcoholism. It is watching the humanity of each of these fundamentally kind individuals being met with nothing but misfortune that leads to cracks in our protagonist’s strong ‘good dog’ mentality.

The constant hum of traffic, with the hazy sound of bass-heavy music, locates a tension and anxiety within the endless echoes of city life. Scenes of violence and emotional intensity are paired with blasting rap music which consumes the audience in the intimate setting of The Albany. Though momentum builds and perspective changes, from the balcony the boy can see the same things; the smokers on the wall, the unfaithful husband, the drinkers. The sense of stagnancy and entrapment builds to breaking point. The slow realisation emerges that ‘playing by the rules’ might not be the answer to breaking the pattern of oppression, and so a frustrated community gives back what it’s getting: obedience, this play shows, does not bring about change. The play does not justify the violence that is unleashed at its end, but it does place it within a context of inexorable, hopeless systemic injustice. This forces the audience to avoid snap judgements and bear witness to the ingrained social issues that the 2011 riots were symptomatic of: ‘I know it seems wrong; what I did was right to me. Being good and feeling good aren’t the same thing’.

Arinzé Kene’s good dog is in its last performances at The Albany to end its tour from 21st Feb – 11th March. Find more info here.