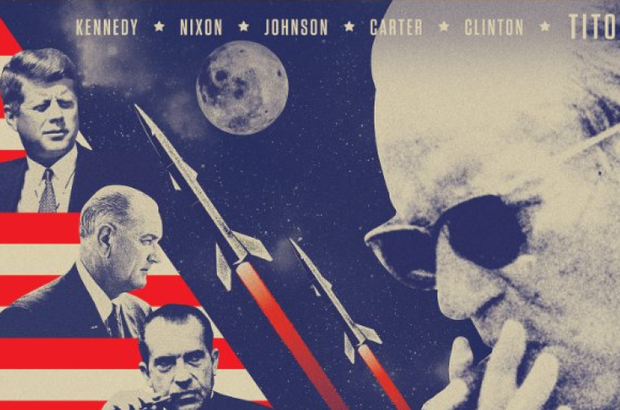 LEAH AARON examines Ziga Virc’s debut, an exploration of the space race blurring of the line between fact and fiction.

I am a sucker for life behind the Iron Curtain. I have never pursued it in any meaningful academic way, but I have read more than one book by Alexander Solzhenitsyn and my visit to the DDR museum was really the highlight of my trip to Berlin. Voyeur? White western millennial willing to downplay the various socialist republics’ systematic suppression of dissent and chronic human rights abuses because they had such beautiful posters? Whatever, I’m not the one being judged here. But throw me a documentary about the Yugoslavian space programme’s secret sale to the Americans in the 1960s and I’m like a (space) dog to a bone.

So I sit down, tea in one hand, digestive in the other, ready to be educated, and for the first thirteen minutes I’m totally drawn in. YFSR engineer Ivan Pavic was essentially sold to NASA and then had his death faked by the Yugoslavian secret service? Love it. Good looking (in a glasses-off-you’re-gorgeous way) but slightly overdressed historian and researcher with direct access to the CIA archives? Yes. This is right up my street. Right. Up. My. Street. The film is going to follow Ivan’s emotional return to the island of Pag, his birthplace in what is now Croatia, where he’ll be reunited with his daughter for the first time. Maybe a bit invasive to film the first time he sets his eyes on his now-adult daughter, but I am absolutely still loving it. I mean, they’re going to a secret army base in the Croatian forest called area 504! What’s not to like? I feel so informed!

It’s only when, because I’m a narcissist under twenty-five, I lose focus twelve minutes in and decide to google the name of the weirdly good-looking historian (you know, to see if he’s published any papers recently) that I realise this film is in fact not, as I was lead to believe when I half-read the film’s description, objective fact, but ‘docu-fiction’, whatever that means. I felt duped.

Turns out it’s all one big post-truth joke, the butt of which are gullible voyeur-socialists such as myself. I was expecting a dry, slightly anorak-y ninety minutes of technical detail, interspersed with some mildly-compelling talking heads. Instead, I got a meta-analytical satire about the nature of narrative, which is not what I asked for. I should have clocked on as soon as Slavoj Žižek, Slovenia’s self-styled answer to Foucault, appeared, shoes off, elbow patches on, spittling to camera about the nature of constructed illusion. It doesn’t help that the film-makers are using literally every documentary cliché ever made. There are so many then-merged-with-now collage shots that you start to wonder if they actually hired someone from The History Channel for post-production. Suddenly the recording of JFK and Jozep Broz Tito’s phone call starts to look a little hokey. Do all documentaries have to have a finding-yourself in Marrakech section now? It’ll be on Making a Murderer next. I get it that uncritical yugo-nostalgia, especially when practised by those with no links to the former eastern-bloc, is highly problematic, I do, but did I really need to sit through ninety minutes of mockumentary for that to sink in? It’s not even that well-made: the acting’s pretty shaky- and fake fly on-the-wall as a device is not exactly original. Take on Spinal Tap and you’re going to lose.

The thing about satire is the audience has (to some extent) be in on the joke, and I think what made this film not work for me, really, was the feeling that the filmmakers didn’t seem to actually want that to happen. You can almost hear the sniggers from behind the camera. There’s something quite unpleasantly bro-ey about a load of documentary dudes schooling you on how to do irony. Yes, I have seen Brass Eye actually, thank you, Professor Žižek. If there’s one thing I know how to do it’s ironic self-posturing.

Or maybe I’m just salty because it’s all a bit too close to the bone. Go see this film if you fancy seeing an unnaturally good-looking historian.

‘Houston, We Have a Problem’ is screening from 8-13th March at the Bertha DocHouse as part of the November film season. More information here.