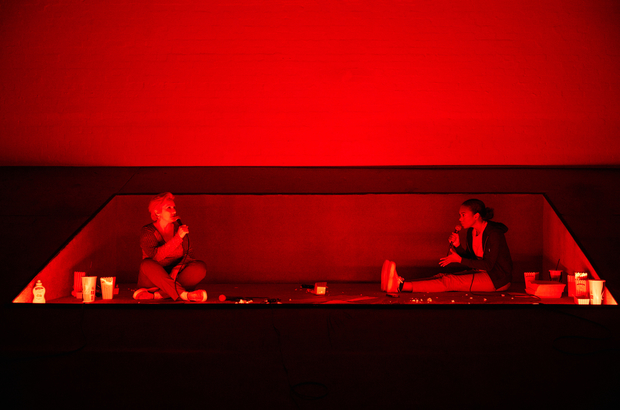 Entering The Yard theatre you are confronted by two figures sitting side by side at the end of the stage, staring back into the audience through 3D glasses. They sit amongst littered cinema food and wrappers, occasionally eating popcorn and sipping cola from large paper cups. The scene is lit blood red (and will remain so throughout much of the performance), and soundtracked by unsettlingly loud strings playing eerie harmonies. Sitting in the audience it feels strangely, paradoxically, as if you are the one being watched.

Big Guns, an original production written by Nina Segal and directed by Dan Hutton, is a self-proclaimed ‘play about violence, a society living in fear and the moment just – before’. Debra Baker and Jessye Romeo, named only One and Two, run through a string of conversations that veer between cold menace, desperate fear, and moments of dark comedy. Together, the two perform an array of independent narratives that present insights into the private lives of others: in her diary, the mysterious ‘Em’ imagines her grisly death as seen by a group of schoolchildren; on a blog devoted to interior design, a man is devastated by the loss of his wife; in a series of YouTube beauty tutorials, a woman documents her declining sanity, plagued by hateful comments and the absence of her husband. In other scenes, the two sat opposite one another relaying the internal thoughts of two strangers squaring up to one another, speaking in stream-of-consciousness style passages in which they finished each other’s sentences to form a kind of two-person monologue. All of these unrelated narratives confront disturbing contemporary themes, exploring obsession (played out both in person and online), severed relationships, and the morbid fascination we have with the violent and the obscene.

Despite spending a large portion of the play sat on the floor amongst the popcorn, both Baker and Romeo incorporated a dynamism to their polished performances, transitioning through an array of convincing personas yet maintaining an overriding sense of unease, perfectly encapsulating ‘the moment just – before’. In the sections that were physically acted, the action was well choreographed, tense and occasionally frantic, aided by the clever use of props, such as when what appeared to be a strawberry milkshake became blood dripping from a girl’s head onto the pavement. The auditorium was also occasionally plunged into darkness, so that you couldn’t see your own hand in front of your face let alone the performers onstage. Even in these moments of invisibility the atmosphere was electrified, alive with nervous energy, built to a crescendo by the voices of the characters and the strange sound effects that emanated from the blackness.

A particular strength of Big Guns was in the interactions with the audience. Whilst there was no ‘audience participation,’ the cast often spoke directly to the crowd addressing them as fellow ‘hostages’ or adopting an accusatory tone and shining bright torches as if conducting an interrogation. Even removed from the action, this made you question your place in the violence that is so prevalent in society.

Big Guns is challenging viewing. Acts that are normally kept safely tucked away behind computer screens or in our imaginations are played out on the stage by characters who could be any one of us. Through accomplished design, acting, and sensory experience, the play poses the questions around violence that we are often too afraid to ask: Do we actually want to witness brutal acts? Are we all capable of committing such atrocities?

Big Guns is playing at The Yard until April 8th. Find tickets and more information here.