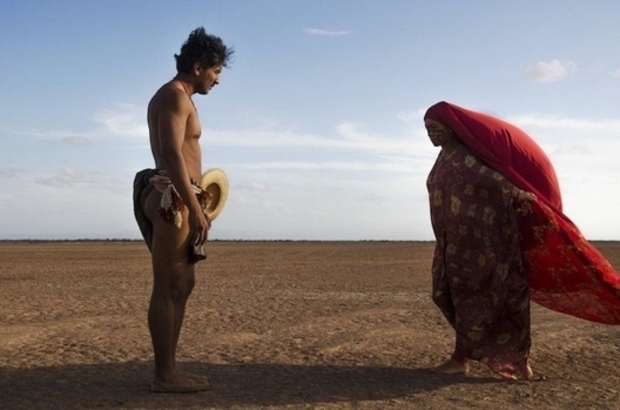 Going beyond drug warfare and blood splattering, Birds of Passage is a true story about the Colombian narcotics trade that refuses to follow the established formula of the mafia genre. Unlike Narcos (the hit Netflix show on the same subject), the film does not employ glitzy caricatures, artificially fast-paced rhythm nor contrived dialogue. Instead, Oscar-nominated director Ciro Guerra and co-director Cristina Gallego have crafted a nuanced portrayal of the indigenous Wayúu people as they grapple with the challenges of the drug trade. The resulting product is a distinctly postcolonial story – it is refreshing, intriguing, and will not be easily replicated.

Birds of Passage is foremost about family and bloodlines. At the start of the film, the Wayúu people chant: ‘if there is family, there is respect. If there is respect, there is honour. If there is honour, there is word.’ The story develops with this ever-present mantra in the background; in this community, family is at the heart of every conflict. The film unfolds with its protagonist, Rapayet (Jose Acosta), falling in love with Zaida (Natalia Reyes). In his attempt to pool enough money to afford the exorbitant dowry for marriage, Rapayet stumbles into the drug trade. The latter becomes a tool to pursue his prime aspiration: building a family.

Significantly, the film does not resort to the trope of the drug trade overtaking the importance of family life. Rapayet’s integrity and values are never compromised. The tragedy in Birds of Passage strikes a much deeper chord – about how despite our best efforts to preserve our honour, there will always be failed expectations. Rapayet has spent most of his life respecting traditional duties in order to prove his worth to his family. Alas, his efforts are in vain due to the misdemeanours of a cruel, corrupted nephew who spells tragedy on the family. This angle humanises the drug trade issue while highlighting its complexity – as one that cannot solely be explained away with concepts of ‘greed’ or ‘economics’. Drug businesses are not just faceless entities, but rather at the very core of family enterprises.

Through its focus on indigenous tribe culture, Birds of Passage presents the audience with the negative consequences of the drug trade from the perspective of these minority groups, rather than from a Western one. The ‘gringo’ Peace Corps, who propagate capitalism and introduce the marijuana business, are secondary characters. Their misplaced moral authority reveals their ridiculousness, and they are side-lined to the role of comic relief.

The film’s main features remain focused on the indigenous – there are stunningly sensory scenes with dance rituals, talismans and dreams of ancestors. Birds of Passage is continually infused with hushed tones, gleaming colours and swirls of movement. The women wear brightly patterned dresses, and the men often don ceremonial skirts. It is an invigorating spectacle of tradition, set in the equally colourful pop era of the late ’70s. These vibrant elements juxtapose the arid desert within which the film is set. Yet this vibrancy slowly dissipates and is gradually replaced by a sterile, all-white mansion built with drug money, signalling the desecration of the Wayúu culture which is spurred on by such practices.

The chief shortcoming of Birds of Passage lies in its strict song-like structure. The film is sectioned off into five acts which facilitate melodramatic build-up and climaxes. However, this structure also makes the plot predictable and tedious. Each ‘song’ announces a new conflict, as well as the inevitable escalation of drama. The sole advantage of this framework is to reinforce the film’s postcolonial lens; it is faithful to the ritualistic nature of indigenous cultures.

‘The film was always conceived as a theatrical experience, and there’s really no better way to appreciate it than in the cinema’, stated co-directors Gallego and Guerro and producer Katrin Pors. Indeed, the theatre audience is readily invested in the plights of these characters, as they are carried along by a tide of suspense and tension. With every image of Colombia flooding the screen, Birds of Passage provides a unique lens into a world otherwise unseen.

Birds of Passage premiered in the UK at the BFI London Film Festival on Wednesday 17th October 2018.