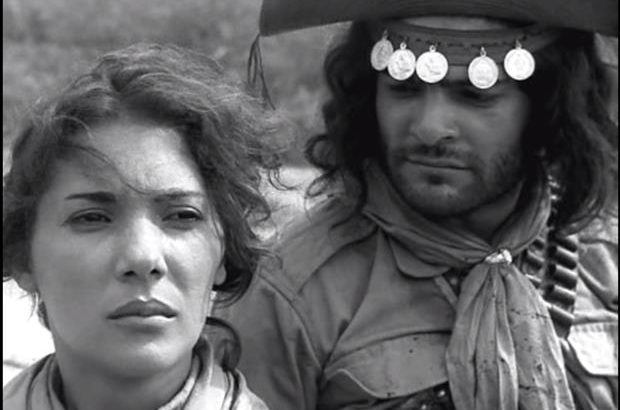 Black God, White Devil (Portuguese: Deus e o Diabo na Terra do Sol, literally God and the Devil in the Land of the Sun) is a brutal, daring masterpiece, arguably one of the most important pictures to ever come out of Brazil. Watching the movie for the first time when it opened UCL’s Festival of the Moving Image, it is not hard to understand why Luis Buñuel declared the film ‘the most beautiful thing I have seen in a decade, filled with a savage poetry’. It has lost none of its ferocity since its release in 1964.

It is hard to pigeonhole Black God, White Devil according to our current frameworks of genre. It is part Biblical myth, part epic ballad, part political drama, part Latin American Western. By combining elements of Sergio Leone, Italian neo-realism, the French Nouvelle Vague and even Soviet propaganda, and adapting them to contemporary Latin American culture, director Glauber Rocha creates a world that is as alien as it is reflective of the socio-political climate of its time.

The film follows struggling peasant Manuel and his wife Rosa in their dire saga through the Brazilian sertão, the arid hinterland in the Northeast of Brazil. The pair encounter ‘God’, personified by black prophet Beato Sebastião (who turns out to be a messianic madman) and the many ‘Devils’, personified by ‘Blond Devil’ Corisco, one of the last of the cangaceiros: heavily armed bandits who terrorized the land, battling the landowners and becoming popular anti-heroes, not unlike classic Wild West bandits. Manuel’s dual struggle as he seeks salvation – first within the context of religion, then in a more military context-is embodied by the bandits who believe that ‘a man is a man when he uses a gun to change his fate… not a cross’. It is painful and compelling to watch; we know that he is doomed from the start.

Rocha, it is apparent, is more concerned with religious symbolism, injustices and the sombre sertão of provincial Bahia in which he filmed, than in compelling characterisation, and thus the product is more mythically stylised than moving. His symbols are obvious parallels to Biblical events and characters, while his outlaws are theatrically, and often comically, savage.

The action is set in motion and framed by the beautifully inventive narration, sung in the style of the Brazilian ‘cantadores’ (minstrels). Rocha’s use of folklore seems to invite and distance all at once, and is viciously juxtaposed with the violence and stark realism of the black and white cinematography. Equally striking are some of the film’s climatic scenes: the electrifying montage of the Monte Santo massacre, a tribute to Einsenstein’s iconic Odessa steps scene in ‘Potemkin’; the Monte Santo chapel sequence, as Manuel kills an innocent baby in a mindless ritual sacrifice only to suddenly realise the horror of blind religious fanaticism; Beato Sebastião, fatally stabbed by Rosa, deliriously crawling on the altar’s big crucifix as he tries to place himself on the cross as a new Messiah.

Rocha, it should be noted, made this, his second feature, when he was only twenty five in 1963. Black God, White Devil belongs to the visionary Cinema Novo movement of the 60s, which saw film as a political and revolutionary tool and aimed to fight against the commercially driven cinema culture that dominated at the time. Building an expressionist and mythological portrayal of Brazilian sertão – the inhuman labour and life conditions of the illiterate, destitute, God -fearing peasants, perennially exploited by landowners, politicians, bandits, Catholic priests and doomsday messianic ‘prophets’, Glauber proposed a ‘new Brazilian cinema’. His vision was of a new Brazil that was less ignorant, less corrupt, less unequal, less exploitative: a country where land could finally belong to Man, not to God or to the Devil.

‘Black God, White Devil’ was released in 1964 and was screened on 21st November as part of the ‘Festival of the Moving Image’ organised by the UCLU Film Society.